loading...
By Michael T. Barry Jr. September 1, 2017 Comments Off on “The Revival: Women and The Word”: A New Film on Queer Women of Color
This post is part of my blog series that announces the release of new films in African American History and African Diaspora Studies. Today, I am featuring The Revival: Women and the Word, which is currently screening at locations across the country.

The director of The Revival: Women and the World is Sekiya Dorsett. Born in Nassau, Bahamas, Dorsett is a queer filmmaker giving voice to issues of equality. In 2008, her first film, Wisdom and Understanding, a short experimental film, made its debut at NewFest Film Festival and the Oakland Black LGBT Festival. In 2009, her short, Sisters, a story about a lesbian woman struggling to reconcile with her mother, was screened at the Austin LGBT Film Festival. In 2015, Dorsett was selected for Go Magazine’s 100 Women We Love highlighting her feature documentary, The Revival: Women and The Word. The 2016 film celebrated queer women of color and premiered at OutFest LA. It then went on to screen nationally and internationally at Urbanworld, Reeling Film Festival, Frameline Film Festival, and Harvard University. The film is now distributed through the prestigious Women Make Movies. Dorestt has served as a writer/producer/editor for NBC Universal and recently as Editorial Director at Viacom. Follow her on Twitter @sekiyad.

The Revival: Women and The Word chronicles the US tour of a group of Black lesbian poets and musicians, who become present-day stewards of a historical movement to build community among queer women of color. Their journey to strengthen their community is enriched by insightful interviews with leading Black feminist thinkers and historians, including Dr. Alexis Pauline Gumbs, Nikki Finney, and Alexis Deveaux. As the group tours the country, the film reveals their aspirations and triumphs, as well as the unique identity challenges they face encompassing gender, race, and sexuality. This is a rarely seen look into a special sisterhood—one where marginalized voices are both heard and respected.

The one-of-a-kind documentary contributes to the necessary task of bringing marginalized voices and experiences to the forefront in a way empowers communities as they exert ownership over their stories.” — Alexandra Bolles, glaad.org 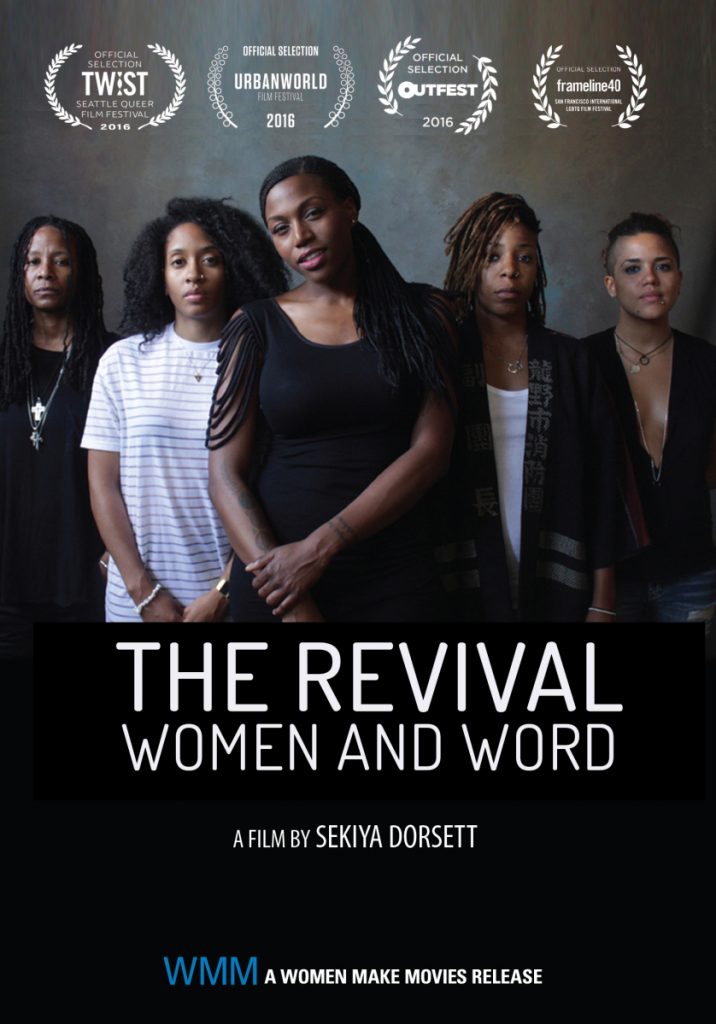 Michael T. Barry Jr.: What type of impact do you hope your work has in art and film communities? How do you hope it will reach young artists?

Sekiya Dorsett: I don’t make stories about when a boy meets a girl because when I turn on my television, search Fandango and look deeply for something to watch, I don’t find a lot of myself on the screen. See, I’m a black queer woman. I can count on one hand how many representations of myself exist in mainstream media. It has always been this way. When I was growing up in the Bahamas, I felt very alone. There was little community and I could not live as my authentic self. I knew when I took the bold leap to move to the United States to study film, it was imperative I tell queer stories. Today, I create for my community of the black, the queer, and the questioning.

My film is a love letter to the community that I found in Brooklyn when I arrived. It was a community that embraced me and that taught me about myself. The Revival : Women and the Word is about 5 fearless poets on a cross country road trip that would change their lives forever. They reconnect with family, sisterhood and confront an America that doesn’t always accept them. We show the intergenerational and historical connections between these vibrant contemporary artist and the foremothers. In New York during the 1980s, queer women gathered and thrived through the Salsa Soul Sisters. The women’s art group allowed for an inclusive space where fearless artists shared their stories and struggles. Because of the power of film editing, we were able to have the contemporary poets in conversation with their foremothers. It was important for me to include historical moments because I acknowledge that we are on a continuum that keeps breathing life into our work.

When young artists watch my work, I hope that they are inspired to tell stories boldly and authentically. It’s hard to find your voice as a filmmaker when you first begin. Sometimes we are trying to make the next “insert your favorite film here” or “the favorite film you admire.” As a filmmaker we have to remember that we’re artists and our voices and perspectives can be different. In fact, different is better. Unique stories may uncover a new perspective and vantage point that is underrepresented. Representation is vital to the human experience. Netflix’s First Time I Saw Me campaign really expresses just how revolutionary it is to see yourself. Not only is it important to see yourself but to see varied images and authentic moments of yourself. We have been living in what Melissa Harris Perry describes as “the crooked room.” For people of color, we are fighting to come out of that room and rise above the falsehoods that society places on us. It’s important for young artists to understand the power we have to straighten that room. We have the power to redecorate that room and recreate a whole new world(s) through film. The Revival: Women and The World takes the viewer into a new world working to reflect queer sisterhood with others. When we screen in less metropolitan areas, viewers always have one question, “Is the tour still going on?” or “How can I go to the tour?” They say that because they want to be there. For most of them, this film is the first time they are seeing themselves. In those moments, I am reminded to keep telling stories that are different and bold.