loading...
By Nathan Dize April 6, 2017 Comments Off on The Poetry of Una Marson and Dionne Brand: An Interview with Belinda Deneen Wallace 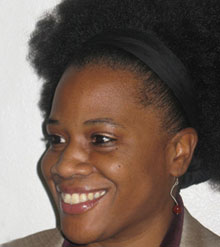 In today’s post, Nathan H. Dize, a PhD student in the Department of French and Italian at Vanderbilt University, interviews Belinda Deneen Wallace about her recent article in the special journal issue on “Women, Gender Politics, and Pan-Africanism” edited by Keisha N. Blain, Asia Leeds, and Ula Y. Taylor. This Fall 2016 issue of Women, Gender, and Families of Color examines the gendered contours of Pan-Africanism and centralizes black women as key figures in shaping, refining, and redefining Pan-Africanist thought and praxis during the twentieth century. The issue is now available in hard copy and online through ProjectMuse and JSTOR. Readers can download the introduction of the special issue here.

Belinda Deneen Wallace earned her Ph.D. from the University of Maryland at College Park and is an assistant professor in the Department of English Language and Literature at the University of New Mexico. At UNM, Wallace teaches courses in the areas of contemporary Caribbean and Caribbean diasporic literature, postcolonial Black British literature, and Afro-Latino literature. As a postcolonial scholar and queer theorist, her scholarship is informed by transnational feminist epistemologies and intersectional queer theory as they pertain to Caribbean and Caribbean diaspora literature and culture. She is currently working on her first manuscript, Mapping the Meta-Colonial: Imagining Caribbean Women, Rebellion, and the Rubble of History, which examines the role of “queerness” in Caribbean women’s literary reimagining of rebellions, revolutions, and acts of resistance. As a whole, her project unveils the cultural relevance, distinctiveness, and importance of queerness to the struggle for national belonging.

Nathan Dize: Your article focuses on the poetic works of Una Marson and Dionne Brand—two influential poets in the African Diaspora. Could you tell us more about them?

Belinda Deneen Wallace: Today most readers of Caribbean literature are familiar with Trinidadian writer Dionne Brand (b. 1952) because she has received a great deal of recognition over the last decade.1 Given the recent explosion in queer Caribbean scholarship, her novel In Another Place, Not Here is definitely on most people’s radar. She is a former Poet Laureate of Toronto (2009–2012), her poetry collections and novels have won numerous awards, and, although less well-known, her documentary work and political activism have also been well-received. However, Jamaican writer and activist Una Marson (b. 1905) is perhaps less well known but certainly no less important.2 Outside of her work as a journalist (she wrote for The Daily Gleaner for several years), Marson is best known for her role with the BBC’s literary program Calling the West Indies (1949), later renamed Caribbean Voices, where she introduced the world to literary greats like Derek Walcott, Sam Selvon, and Andrew Salkey. More recently her poetry, especially her overtly political pieces, has received much-deserved attention. A few years ago a collection of selected poems was reissued, making access to her work much easier than in years past.

Although they were born nearly fifty years and 1200 miles apart, they share several interesting parallels. These parallels are in part why I paired them in my analysis. Both migrated to major metropoles; for Brand it was Toronto, for Marson, London. Both became politically active in their early 20s and their activism was definitely influenced, if not shaped, by key tenets of Pan-Africanism. There are fairly pronounced Pan-African ideologies around liberation, representation, and self-determination in their works. Although, to my knowledge, Brand did not directly engage with Pan-African organizations, her political and creative works certainly embody the spirit of Pan-Africanism. However, evidence does indicate that Marson was in some ways directly involved with the UNIA, so it is not surprising we hear strong echoes of Pan-Africanism in her writings. Finally, and I think this is the most striking similarity, both women viewed art as a political tool. It is noteworthy that both women founded publications that gave black women a platform to share their stories. For Brand, it was the now-defunct newspaper Our Lives and for Marson, it was her magazine The Cosmopolitan. These writers wanted to give greater visibility to black women’s lives so they created archives to document those experiences. I find this history intriguing and continue to explore the extent of its impact.

Dize: Your article points to poetry as a means of accessing “Pan-African Feminist Humanism.” Could you describe the Pan-African project and how women like Una Marson and Dionne Brand have worked within this tradition to infuse it with a feminist humanism?

Wallace: Generally speaking, Pan-Africanism is a global movement that posits black people share a common heritage, history, and destiny and this commonality directly impacts the ways black people organize and resist various forms of racial, cultural, and economic oppression. However, in addition to being a political movement, I view Pan-Africanism as a philosophical commitment to asserting black people’s value, dignity, and right to self-determination as human beings. As I state in the article, in some ways asserting a Pan-African feminist humanism is redundant because any Pan-African project, including the one in which I engage here, must unapologetically affirm its dedication to all black humanity. In emphasizing all, I qualify humanism with feminist to draw attention to a specific discourse on gender and black women’s humanity.

When you ask about my use of poetry in accessing a particular kind of feminism, I feel compelled to come up with an amazingly articulate way to talk about the wonders of poetry. But, honestly, I view poetry simply as a doorway: a way to enter different emotions, conversations, and experiences. Marson’s and Brand’s poetry embodies a complex gender consciousness that allows me to enter into a conversation on how an intersectional feminist approach to Pan-Africanism brings forth different epistemologies around resistance and liberation and permits a rearticulation of women’s subjectivity, empowerment, and even love. After all, Pan-Africanism is about nothing if not black self-love. Marson’s poems deal equally with class, gender, and race, so they offer a unique opportunity to examine a history of intersectional feminism within Pan-Africanism at a time when liberation was viewed as a masculine endeavor focused first and foremost on racial liberation and then class. When Marson was writing, gender was often an afterthought. Fast-forward a few decades and Brand advances our understanding of Pan-African humanism by interjecting sexuality into the conversation, particularly lesbianism. Now we have to further reevaluate the ways in which we fight for black liberation and become more conscious of how we value and include all of black humanity on the journey toward empowerment. Ultimately, what I hope to achieve with this essay is an unearthing of unconventional epistemologies within the Pan-African tradition I see at work in Afro-Caribbean women’s poetry.

Dize: Given Marson’s role in the BBC’s Caribbean Voices and her overtly political poems about blacks and blackness in Britain, you make an interesting choice by focusing on her “nature” poems. Why was this essential for your argument about Marson’s dual feminist/humanist praxis?

Wallace: Marson’s more explicitly political poetry, like “Kinky Hair Blues,” “Black Burden,” and “Quashie Comes to England,” has received the lion’s share of attention. Her nature poems, however, have been largely under-theorized or viewed as apolitical or hyper-romantic. But a closer look at these poems reveals a depth that speaks directly to Pan-African humanism. I don’t want to inadvertently promote stereotypes or antiquated heteronormative gendered ideas; however, I believe there is something to be said for Marson’s use of nature as a way to talk about women, race, femininity, and gender limitations. One of the more intriguing aspects of the nature poems is how they privilege women’s material reality and lived experiences as valid sites of knowledge. In highlighting the interrelatedness of humanism and feminism, nature becomes a major trope that elucidates a somewhat understated but powerful understanding of gender, race, and class inequities. Interpreting Marson’s poems from a humanist/feminist perspective allowed me to reconceptualize black female subjectivity within the Pan-African tradition. The nature poems ask us to rethink how we formulate our feminist “space”—space that should fully accommodate black female subjectivity and that lived reality.

Dize: Like Marson, Brand follows a transnational trajectory in her literary career, moving from the Caribbean to Canada. Could you explain this trajectory’s impact on Brand and the way she creates subjectivity in her poetry, especially in her 2010 collection Ossuaries?

Wallace: I would argue that migration has greatly influenced Brand’s writing. Her literature, which often deals with the theme of belonging, is cerebral as well as tactical—you can just about feel, touch, and taste her stories in a very strong way. She’s a master at crafting narratives where complicated characters go on astonishing journeys—which are not always physical—in search of answers to their longings to belong. Her narratives unfold amidst a milieu of conflict—personal and political, private, and public—where such longings symbolize the hardships Caribbean immigrants face in their unceasing desire for that proverbial room of their own. Ossuaries certainly follows this trajectory. We have this young black woman, Yasmine, on a grueling excursion to not only find and claim subjectivity, but also to locate a place where she can exist, preferably in peace. When I say subjectivity, I’m evoking more than just identity; I’m also referencing the process involved in shaping that identity—the dynamic process of becoming and not just defining one’s self, but actually constructing a self. Subjectivity in Brand’s literature is as much about the collective as it is the individual. Throughout her writing, female characters operate in pairs or trios because, as the literature strongly suggests, the only way to an autonomous “I” is via the collective “we.” In this way Brand evokes both the Caribbean saying “all o’ we is one” and the Pan-African belief in a collective destiny.