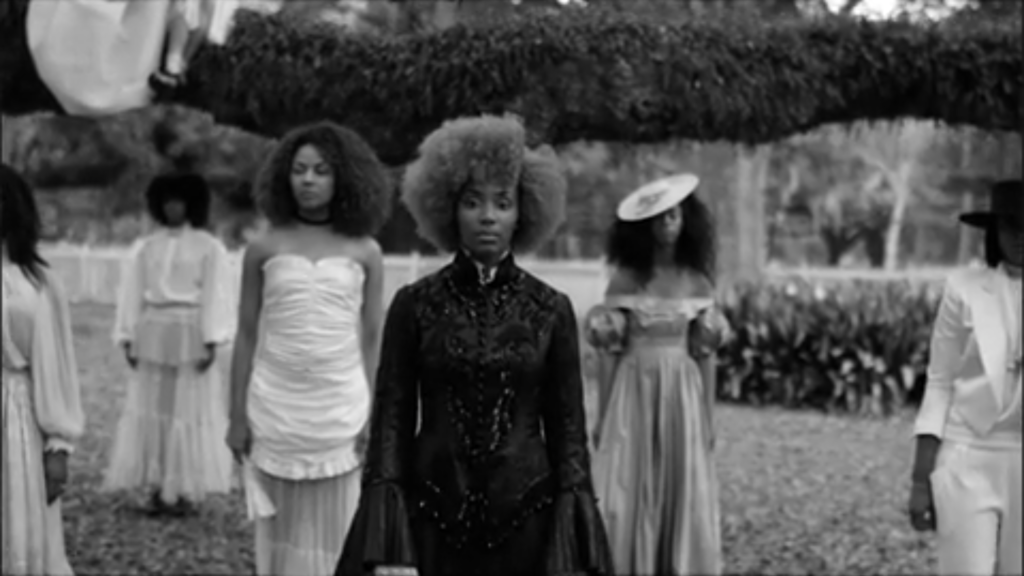 The release of Beyoncé’s Lemonade has prompted many viewers and critics to remark on her inclusion of Malcolm X’s statements about black women in the film. Indeed, her use of Malcolm X’s voiceover while showing different images of black women is an interesting choice given the black nationalist icon’s position on women within the black community. Over the course of his life, Malcolm espoused a range of views on black women and gender roles that traversed the political spectrum. His inclusion in what is being hailed as a new black feminist text is a validation of his lingering relevance within the black community. It is also a testament to his shifting ideas about women and gender roles, a position that many black women radicals helped shape.

Born Malcolm Little in 1925, the future black nationalist leader came of age in a family with a strong mother—Louise Little—who was a devoted follower of nationalist Marcus Garvey and his global organization, the Universal Negro Improvement Association (UNIA). Although Malcolm X’s nationalist grounding is often attributed to his father, Earl Little, Louise was a political thinker and activist in her own right. She fostered black nationalist sentiment within her local community of Omaha, Nebraska and among her children through her participation in UNIA activities. As Malcolm’s daughter, Ilyasah Shabazz has noted, her grandmother Louise played a key role in “sow[ing] the seeds of insight, discipline …and organizational skills” in her father “not Elijah Muhammad.”1 Malcolm would carry his mother’s nationalist organizing lessons with him when he left her and his other siblings to live and work in Boston and Harlem in the 1940s.

Black women radicals shaped Malcolm’s trajectory before and after he went to jail and joined the Nation of Islam (NOI). As historians Erik S. McDuffie and Komozi Woodard have noted, famed Communist Party member and theorist Victoria (Vicki) Garvin tried to recruit the burgeoning radical into the CPUSA. While unsuccessful, Garvin’s efforts ignited a life-long friendship between the two activists which fundamentally shaped Malcolm’s political outlook and trajectory.2 Furthermore, while living and working in Harlem, Malcolm ran in the same circles as other influential activists including “Queen Mother” Audley Moore, Maya Angelou, and Shirley Graham Du Bois (W.E.B. DuBois’s wife). All of these women nurtured his black nationalist views through their street corner and stepladder speeches, personal conversations, and political writings. In fact, many women— including Queen Mother Moore and Grace Lee Boggs— have offered vivid accounts of their private, political conversations with him about black nationalism and grassroots organizing.3

These women also contributed to his understanding of black internationalism. Not only did black women radicals work alongside Malcolm at international anti-colonial conferences in the late 1950s and early 1960s, they also transformed his politics during his 1964 trip to Ghana. When he visited the newly liberated African nation, several black women residing in the country, including Maya Angelou and Vicki Garvin, met with the nationalist leader. As McDuffie and Woodard point out, they created the “Malcolm X Committee,” designed to help welcome and support Malcolm in his political evolution.4 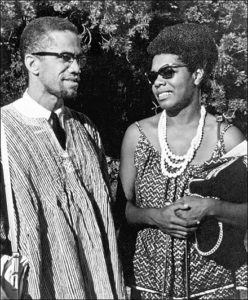 Malcolm X and Maya Angelou in Ghana in 1964

Black women radicals influenced Malcolm X’s ideas about gender roles. As a member and minster for the NOI, Malcolm had esteem for black women. However, as historian Farah Jasmine Griffin has noted, his reverence for them was tempered by the “promise of protection” or a contract in which “the woman gets protection; the man requires a possession.” To be sure, this contract was meant to treat black women with respect and femininity—attributes that white society never applied to black women. However, it also repressed black women by subjecting them to the same patriarchal standards as their white counterparts.5

Malcolm X credited black women with influencing his increasingly progressive views on women and gender. Through his personal and political relationships with them, he gained an awareness of their intellectual acumen, the importance of women’s equality, and the centrality of women’s rights to black nationalist projects. Statements on women’s and gender equality punctuated his speeches. In his speech, “The Role of Women,” for example, he noted, that through his travels and conversations with women he became “thoroughly convinced” of the “importance of giving freedom to the woman” and aware of the “contributions our women have made in the struggle for freedom.” The leader noted that he was in favor of “giving them all the leeway possible because they’ve made a greater contribution than many of us men.”6

Placed in the context of his political evolution, in the intellectual influence of black women we see how important Malcolm X’s inclusion in the Lemonade film actually is. His words resonate because they offer validation of black women’s oppression from one of the community’s foremost male leaders. They are also important because we now know how much Malcolm understood his statements about women’s oppression and the force with which he came to support women’s leadership and liberation. This was due, in large part, to black women’s often invisible intellectual influence, influence which caused the nationalist leader to expand his ideas about women’s oppression and liberation. As we continue to explore new facets of black feminist work—past and present—we should be careful to note how male voices echo the intellectual influence of unacknowledged women. We cannot fully understand black nationalism, black liberation, or Beyoncé without them.

Comments on “The Many Women Mentors of Malcolm X”