*This post is part of our new series on Black Ecologies edited by Justin Hosbey, Leah Kaplan, & J.T. Roane.

Between 1829 and 1832 Eve and Sall had both disappeared. Eve and Sall were two women who were enslaved in Hertford, North Carolina and their disappearance was recorded by enslaver John Wood who advertised their disappearance in the Elizabeth City Star.  To disappear means to cease visibility, to vanish, absenting one’s presence from observable space. As enslaved chattel, Eve and Sall were not permitted to go and come as they pleased, but these two women asserted their will and escaped the plantation and moved through punitive landscapes in hopes of gaining freedom.

This piece explores the historical phenomenon of enslaved flight through highlighting the efforts of enslaved runaways who were held in bondage in Perquimans County, North Carolina. In highlighting this episode of self-liberation, we can provide a “people’s geography”—­ one where Eve, Sall, and their partners Manuel and George, resisted the chokehold of slavery while utilizing their knowledge of navigation on their journey to freedom. In considering the antebellum world that sought to control their mobility, the landscape revealed its potential as a “terrain of resistance beyond the racial, spatial, political, and economic rationale of a world built and maintained by chattel slavery.” This group of enslaved runaways discussed and strategized ways to escape the plantation’s confinement. Their story highlights how the enslaved challenged the their bondage by creating possibilities for attaining (and maintaining) kinship channels and avenues for an expanded navigational literacy. The labor and logistical demands on enslaved people inadvertently allowed a range of opportunities for them to strategize their self-liberation as they transformed their surrounding landscapes into pathways of liberation.

John Wood does not hide his disgust for Manuel and George. The ad mentions that Manuel was “transported from the county with a view to sending them to New Orleans.” As Perquimans County’s court clerk, Wood became acquainted with Manuel during a criminal court case in June 1829. 1 In State vs Negro Manuel a Slave, Manuel’s enslaver Hugh K. Wyatt was accused of allowing Manuel to “go at large,” which went against “the peace and dignity of the State” of North Carolina. The runaway slave ad indicates that Eve escaped in September of the same year, three months after Manuel’s enslaver Hugh Wyatt was scheduled to appear in court. Beyond the runaway slave ad and court records, however, we do not know the events that resulted in Manuel being scheduled for sale to New Orleans. Nevertheless, Manuel did not end up in Louisiana as Wood speculated- he was sold to Matthew Cluff, an Elizabeth City merchant.

Wood’s assessment of Eve’s appearance and manner is telling. He describes Eve as having a “bushy head of hair, rather thick lips, smooth, dark skin” and that she “lisps a little when spoken to.” Such a description indicates that Wood observed Eve with regularity. Perhaps Eve was a domestic servant within the house. And though Wood does not similarly comment on Sall’s speech pattern, both women seem to have held positions within the plantation home that allowed for regular contact with Wood. Domestic positions within the household meant that they had a more limited range of movement than those forced to work in agricultural environments located in outlying areas of the plantation. Considering they held a more limited knowledge of the rural landscape, they might require the assistance of their husbands to secure an escape. 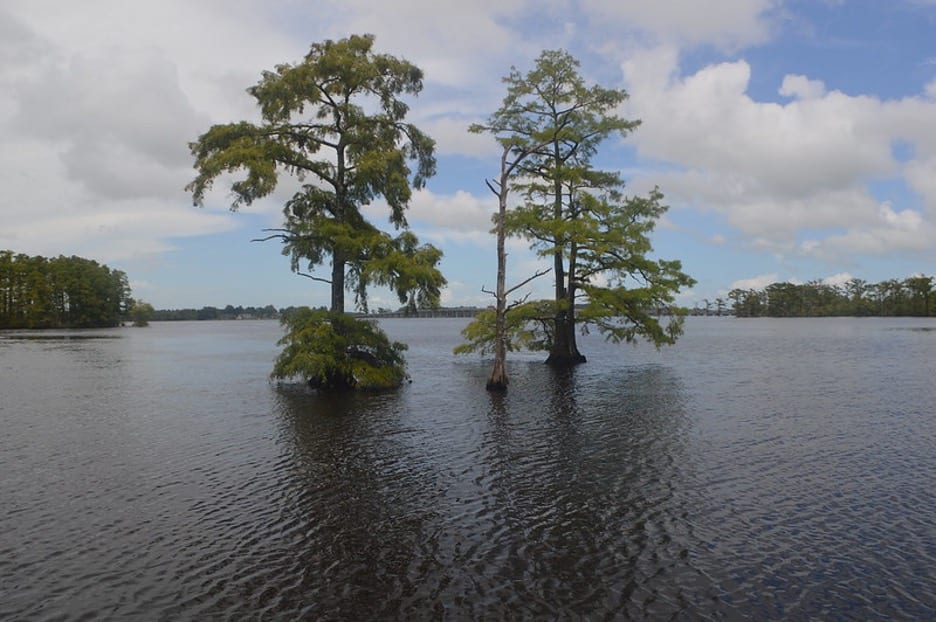 Hertford, the seat of Perquimans county, was incorporated in 1758 and is bound by the Perquimans River. Like most towns located in the Albemarle region of northeastern North Carolina, development was severely limited by the uneven, marshy topography and meandering coastline.

In planning their escape, Eve and Sall, alongside their enslaved husbands Manuel and George, sought freedom by boldly moving through these punitive landscapes. The biographies of these four individuals are limited to the court case and the ad that sought their capture; both written by enslavers. Though they left no documents of their own, we can still place their escape in a broader narrative of spatial resistance found in this region and imaginatively reconstruct their pathway to liberation

Enslaved people confronted this harsh landscape as they performed the heavy agricultural, pastoral, and manual labor required to create transportation channels for commerce in the eastern region of North Carolina. Enslaved people were forced to dig the Dismal Swamp canal and other ditching systems throughout the marshland, while also building roads where passageways led to prosperity for those who held power of them.

As chattel, enslaved people were property in the eyes of society and the law. Because of this dehumanized existence their movements are often trivialized in regional studies of northeastern North Carolina. I often come across local histories of canal and bridge building in the early national era in locales across North Carolina and Virginia in which no mention is made of the enslaved laborers that made these channels of transport possible. This erasure is emblematic of the devalued, often very arduous work, performed by enslaved people. Geographer Katherine McKittrick has analyzed disciplinary encounters between Black studies and geography and has observed the prevalent notion that Black people are “ungeographic.” McKittrick goes on to explain how “discourses erase and de-spatialize [enslaved people’s] sense of place,” and her work conceptualizes Black geographies from that tenuous position of alterity.

The historical rendering of Black people as “ungeographic” is to not question how an enslaved person survived a flight to freedom that landed them seventy miles from the original site of bondage. As historian Alisha Hines has rightly observed, “Black people are allowed to be shapeshifters within the historical record.” 2

While in flight enslaved people had to watch out for slave patrollers as well as wild animals by moving cautiously through the wilderness landscape. Enslaved people had to know when to be still, when to watch, listen and feel. Their movements meant advancement in distance, but also noise which could cause alarm to nearby birds and other animals. 3 William H. Robinson, who had run away several times near Wilmington, North Carolina explains the importance of certain tools for fighting off bloodhounds:

There was always an understanding between the slaves, that if one ran away they would put something to eat at a certain place; also a mowing scythe, with the crooked handle replaced with a straight stick with which to fight the bloodhounds.

The image of the scythe for the enslaved runaway signified the potentiality of an event that would test the determination of their plans. One look at the scythe and they knew there was no turning back. Robinson also spoke of the elderly enslaved woman who gave him onions for use during his flight to freedom:

“She gave me four or five onions, and told me upon the peril of my life, not to eat a single one of these onions, because they would make me sleepy and I would be liable to be caught. But she said negro hunters came along there every two or three hours in the day; and I learned for the first time how to decoy the blood hounds, for she told me whenever I heard the baying of hounds on my trail, to rub the onions on the bottoms of my feet and run, and after running a certain distance to stop and apply the onions again, then when I came to a large bushy tree, to rub the trunk as high up as I could reach, then climb the tree.”

Here Robinson highlights the way enslaved people worked together to help each other move through dangerous geographies, and here he challenges the white elite’s conception of “value.” Slave owners asserted that, upon reaching a certain age, a person lost their value in the eyes of the slave market. Slaveholders believed the enslaved elders were worthless and inconsequential from a monetary perspective- but as Robinson shows, they failed to consider that these elders possessed a deeper knowledge of place and practices that helped freedom-seekers in their flight out of bondage.

One can imagine Eve, Sall, Manuel and George experienced similar harrowing episodes throughout their escape. Though we may never know how long they were able to survive as enslaved fugitives, a subsequent document provides a small clue. The 1840 census notes John Wood did not own any enslaved women in the age range originally indicated on the runaway ad for Eve and Sall. 4 Additionally, the North Carolina assembly passed its most draconian legislation against running away only seven years later, hoping to reduce the number of people escaping to the Great Dismal Swamp. 5 Perhaps these freedom-seekers made their home in this swampy marshland and forever escaped white surveillance? Perhaps they made it North? Regardless of the missing details, what cannot be contested is that Eve and Sall, with the help of their enslaved husbands, possessed the courage to move through this terrain and challenge the system that tried to strip them of personhood.

Christy Hyman is a digital humanist, GIS consultant, and PhD Candidate in the Department of Geography at the University of Nebraska-Lincoln. Her research examines the social, cultural, and political assertions of African Americans who lived in the Great Dismal Swamp region throughout the antebellum period of the United States. Follow her on Twitter @Christy_SpaceHW.