This post is part of a recurring blog series I am editing, which announces the release of selected new works in African American and African Diaspora History. Today is the official release date for The Black Panthers: Portraits from an Unfinished Revolution, published by Nation Books.

The authors of The Black Panthers are Bryan Shih and Yohuru Williams. Bryan Shih is a photojournalist based in New York. A former contributor to the Financial Times and National Public Radio in Japan, he is a graduate of the University of California-Berkeley Graduate School of Journalism and a former Fulbright scholar. His work on the Panthers has garnered him one of the highest rankings among entries in the LensCulture 2015 Portrait Awards competition, and has led to his selection for the New York Times inaugural portfolio review. 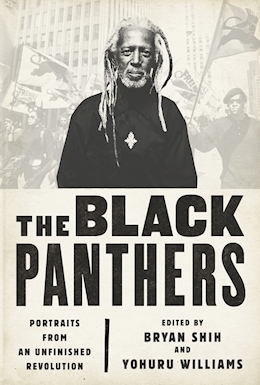 October 2016 marks the fiftieth anniversary of the founding of the Black Panther Party, an organization that remains one of the most misunderstood of the twentieth century. But beyond the labels of “extremist” and “violent” that have marked the party, and behind charismatic leaders like Huey Newton, Bobby Seale, and Eldridge Cleaver were the ordinary men and women who made up the Panther rank and file.

In The Black Panthers, photojournalist Bryan Shih and historian Yohuru Williams offer a reappraisal of the party’s history and legacy. Through stunning portraits, poignant interviews, and illuminating essays by leading scholars, the book reveals the grit and battle scars of the foot soldiers of the party, some of whom eventually became top party leaders themselves—and the undying love for the people that kept them going.
“The Black Panthers: Portraits from an Unfinished Revolution is a brilliantly conceived volume that offers a refreshing take on a well-trod history too often told from the perspective of its Oakland-based, male leaders and their iconic images. Uniquely, this powerful book is driven by Bryan Shih’s recent portraits of local chapter rank-and-file members, whose gripping recollections told in oral histories illuminate the complexity and importance of the BPP’s grassroots organizing structure in history and for our own times. This innovative volume boasts a remarkable series of essays by leading scholars on a range of topics including Black Power, women, the rank-and-file, ethnic nationalism, health activism and international outreach as well as a treasure trove of archival images from the Black Panther Newspaper. Together, Bryan Shih and Yohuru Williams demonstrate why the Panthers story – its lessons and failures – even fifty years after its founding, remains key to understanding national and international struggles for freedom and justice today.”  —Cheryl Finley, Associate Professor and Director of Visual Studies, Cornell University
***

Ibram X. Kendi: What do you hope readers take away from viewing and reading The Black Panthers?

Bryan Shih and Yohuru Williams: “Every now and then,” the artist Pablo Picasso once observed, “one paints a picture that seems to have opened a door and serves as a stepping stone to other things.” In a similar vein, we hope our new book The Black Panthers: Portraits from an Unfinished Revolution, will open the door and serve as a stepping stone for a reconsideration and new appreciation for one of the most significant, if still largely misunderstood, organizations of the late 20th century, the Black Panther Party.

In focusing on and allowing the rank and file of the party to speak for themselves, the book’s interviews, along with Shih’s brilliant photographs, illuminate previously unknown aspects of the party’s work and history. Short essays by some of the leading scholars of the party punctuate and contextualize the powerful stories, and the accounts of struggle and survival by former members that we hope will inspire a new generation of activists.

Comments on “The Black Panthers: A New 50th Anniversary Book of Revolutionaries”