In the opening pages of New World A-Coming: Black Religion and Racial Identity During the Great Migration, Judith Weisenfeld tells a memorable story about Alec Brown Bey, a South Carolina native who appeared before the Philadelphia draft board to register during the Second World War. Brown Bey’s story was that of millions of other Black southerners who headed North during the Great Migration, and one of nearly thirteen million men who answered the call to register.

Weisenfeld paints a picture of a man, who, before his arrival in Philadelphia, would likely have been fine being categorized “Negro” by the draft registrar–George Richman–as he would have been satisfied with being registered as Alec Brown. “But sometime between settling in Philadelphia [probably in the late 1930s] and appearing before the draft board in 1942, Brown had become a member of the Moorish Science Temple of America” (2). This meant that Alec Brown could no longer be satisfied with the title “Negro” as his faith commanded that he deny that designation, and accept the truth of his racial and religious identity. As such, he asked Richman to properly represent him as Alec Brown Bey, Moorish American.

Brown Bey’s story simultaneously evokes a picture of the mundane lives of everyday Black people and the distinctiveness of Black religiosity at the turn of the twentieth century. Like Alec Brown Bey, Black folks who migrated from the South just after the turn of the 20th century navigated complex religious spaces where religious transformations meant an intentional wrestling with who they were racially inasmuch as who they were religiously.

Set in the backdrop of the Great Migration, Weisenfeld effectively transforms a rich array of archival materials, like a two-page draft registration, from a sterile document into a living, breathing religious body that we can feel on the pages. In a nearly four hundred page text, Weisenfeld nimbly moves among three parts (“Narratives,” “Selfhood,” and “Community”), teaching us about the religious leaders of Ethiopian Hebrew congregations, the Nation of Islam (NOI), the Moorish Science Temple (MST), and Father Divine’s Peace Mission (PM), including the lives of Noble Drew Ali, Father Divine, and Wallace D. Fard. But as Weisenfeld astutely notes, the archives illuminate the stories of the people who occupy the less prominent spaces, or the sometime between, and reveal the narratives of much less prominent but no less important keepers of the religious and community formation at the local level, including Carrie peoples, Joseph Nathaniel Beckles, Faithful Mary, J. Pearsall Bey, Squire Bryant Bey, Reuben Frazier Bey, and Happy S. Love. 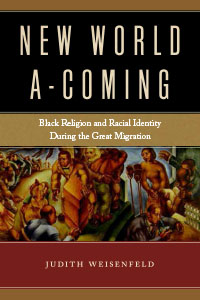 And it is Weisenfeld’s illumination of the spaces and places sometime between that makes New World A-Coming so noteworthy. The monograph is impeccably researched and paints a colorful picture of religious diversity among Black people. In so doing, she further dismantles what William D. Hart aptly characterizes as the “standard narrative of black religion as the black [Christian] church.” She also successfully constructs a narrative that traverses the sometime between where the repudiation of Negro identity and that of unquestioning assimilation to an American national norm resulted in nuanced and complicated emphases on the history of  racial construction during a migratory era. Weisenfeld dismantles the idea that race making lies solely or predominantly in the hands of whites. Agency, she contends, has always been the work of Black religious subjects, and especially so in regards to how they construct, revise, or reject racial categories.

The essays in this roundtable on New World A-Coming take seriously the ways that Weisenfeld’s archival dwellings tell the stories of Black religious agency anew. Danielle Brune Sigler reminds us of just how important having access to original archival records can be and encourages the careful use of said sources. In “Uncovering New Sources for Research on Black Religion,” she lauds Weisenfeld’s methodological depth and breadth with attention to the vast array of federal, state, and archival records as well as online databases (including death certificates, naturalization forms, marriage census records, and even Ancestry.com) that range from the popular to the mundane. The wealth of information Weisenfeld unearths effectively fills archival gaps and in so doing, gives further credence to the religio-racial identities as lived on the ground by individual adherents, and enriches the landscape of Black religion at the turn of the twentieth century.

The essays in this roundtable also constructively interrogate the ambiguity of sometime between, or the varied locations where, according to Weisenfeld, Black religious diversity and racial construction intersect. Emily Suzanne Clark applauds the thematic (as opposed to chronological) structure of the text and explicates how New World A-Coming attends to the lived realities and theological perspectives of real life religious individuals. In “Rethinking Religion and Race in the Great Migration,” Clark takes up Weisenfeld’s use of “religio-racial” to further explore the corporeal spaces where religio-racial identity is created and inhabited while seeking greater clarity in the sometime between child-rearing, family dynamics, sexuality, and gender.

Chernoh Sesay Jr. further notes the ways Weisenfeld’s structural scope deftly maneuvers among the tensions of gender (including an underlying and unintrusive theme of masculinity) that permeates throughout the varied experiences of religious practitioners during the interwar urban North. Sesay also succinctly locates Weisenfeld’s place in a long and steadily growing lineage of sociological, ethnographic, literary, and historical scholarship on race consciousness and religion. Lastly, Tisa Wenger draws a comparison of the Reform and Zionist movements within American Jewish history to make a compelling case for considering nation, nationality, race, and religion as multiple yet complementary axes of difference. In “The Complexities of Racial and Religious Identities,” Wenger suggests that these axes comprise their own sometime between and collectively informed the efforts of members of Ethiopian Hebrews, NOI, MST and PM black participants to relocate their communities while reconfiguring their religio-racial identities.

From these thoughtful responses to Weisenfeld’s engaging historical exegesis we see the intimate relationship between the power of remaking categories and that of remaking the self. After all, community building and faith are never far from notions of peoplehood, religious history, and racial identity. In the end, as Weisenfeld so clearly and convincingly argues, the power of self-fashioning for black members of religious communities at the turn of the twentieth century lie in the sometime between expression, nation, experience, community, and faith.

Comments on “Sometime Between: Living Archives and the Power of Black Agency”