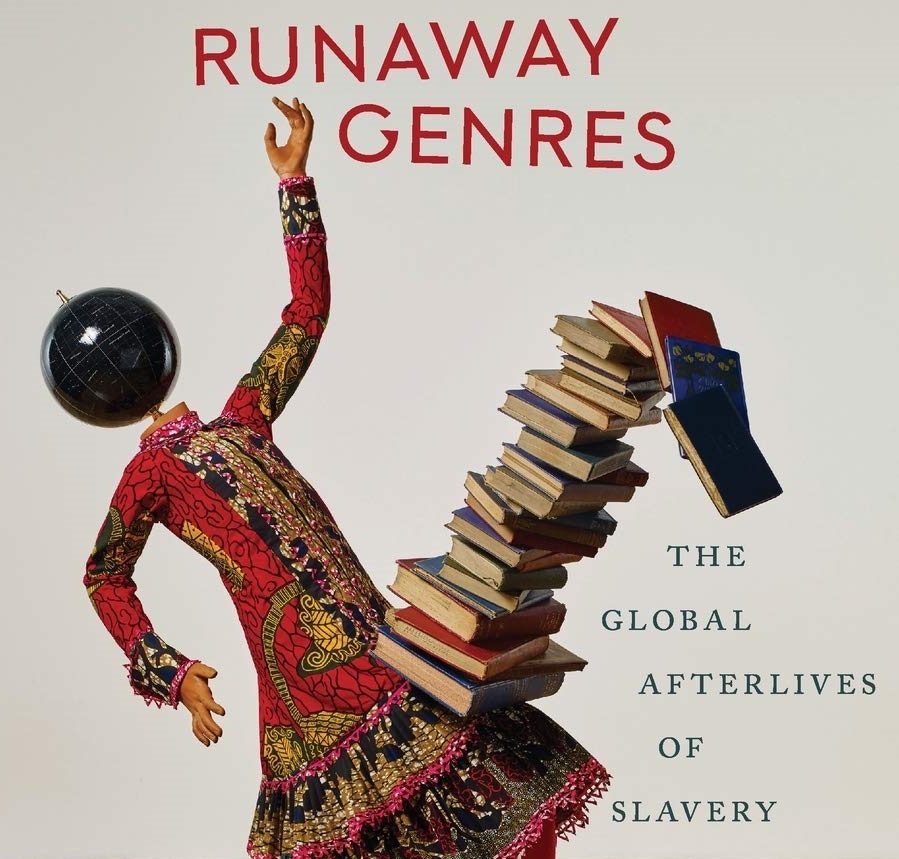 In her sweeping monograph Runaway Genres: The Global Afterlives of Slavery, Yogita Goyal takes up the legacy of the American slave narrative in contemporary literature and global human rights discourse, observing that writers of the past few decades—from David Eggers to Paul Beatty to Toni Morrison—have found generative ways to reappropriate the genre in their “neo-slave narratives.” The book furthermore suggests what Goyal terms a “logic of analogy” as a useful analytic for reading contemporary neo-abolitionist and human rights narratives—Kony 2012, for instance, or the #BringBackOurGirls movement. Such an analytic at once acknowledges difference across time and provides a deeper understanding of our global present. Writing from the fore of contemporary transnational and African American literary studies, Goyal shines in this study of deft critique and elegant close-reading—a persuasive argument not only for slave narratives’ enduring relevance but for their particular urgency in our historical moment.

Despite the ambitious scope of her project, Goyal’s editorial and pedagogic chops are evident here. She offers clear signposts for the less-traveled reader: each chapter begins with an outline of its thesis before moving into a literature review, a series of close-readings, and concluding with a brief transition into the subsequent chapter. The result is one fluid and coherent study, its subject moving further away from traditional form as the book goes on. The introductory chapter situates the project within the field and reveals the architecture of the book. It also lays the groundwork for Goyal’s comparative study by establishing the “peculiar features of the slave narrative” and identifying four literary forms—the sentimental and gothic genres, post-Black satire, and the trope of the “Talking Book”—that comprise the contemporary afterlives of the slave narrative in her readings. Goyal addresses the recent shift “From Atlantic to Global” within literary studies—that is, the move away from postcolonial toward more broadly-defined global Anglophone or world literatures. Challenging this tendency, Goyal contends that reading U.S. slave narratives alongside literatures of the postcolony and Global South is necessary to understanding race and power in a twenty-first-century, transnational context.

In the book’s first chapter, Goyal turns to the phenomenon of modern slavery and its rhetorical positioning as the global legacy of U.S. slavery. Modern slave narratives borrow the language of sentimentalism employed by earlier abolitionist texts in order to establish a connection between reader and subject rooted only in sympathy—and at the expense of acknowledgements of racism and colonialism. Goyal explores this thread through readings of two contemporary examples: Francis Bok’s memoir Escape from Slavery (2003), coauthored by an American journalist, demonstrates a neo-abolitionist insistence on authenticity and sentiment over the narrative agency of its subject; and Dave Eggers’ 2006 novel What is the What, comprising “a neo-liberal humanism that continues to package African atrocity as a form of self-constitution for the American reader” (59).

The second chapter takes up the genre of child soldier fictions and traces how such memoirs and novels “often replicate the structure of the [slave] narrative—an idyllic home, traumatic captivity, and descent into horror,” in a blend of the sentimental and the gothic (70). The scope of Goyal’s study is quite wide here: she considers the #BringBackOurGirls campaign of 2014 alongside Grace Akallo and Faith McDonnell’s Girl Soldier (2007) and Susan Minot’s Thirty Girls (2014); critiques the “Africanization” of the boy child soldier through Ishmael Beah’s A Long Way Gone (2007) and Uzodinma Iweala’s Beasts of No Nation (2005); observes the gothic “unsettling” of innocence and guilt in Chris Abani’s Song for Night (2007); and reads Ahmadou Kourouma’s total rejection of sentimentalism in favor of grotesque satire in Allah is Not Obliged (2007). The value of such contemporary gothic fictions, Goyal insists, is their potential to “resist[]…the reader’s sentimental education” and to complicate conceptions of child as merely passive or necessarily innocent (104).

Goyal moves on to consider the rise of a “post-Black” idiom in the years since the civil rights era, and the perhaps paradoxical way certain twenty-first-century writers at once inhabit this idiom and attend to the subject of slavery. The “post-Black neo-slave narratives” of Mat Johnson (Pym, 2011) and Paul Beatty (The Sellout, 2015), as Goyal suggests, are as interested in satirizing figures of Black heroism and resistance as they are in condemning white racism, “operat[ing] in a deliberately antihistorical vein” that “refuses both the substitution imagined by sentimentalism and the possession feared in gothic returns” (114). The chapter closes with an energetic reading of Colson Whitehead’s Underground Railroad (2016), a contemporary narrative that defies simple categorization—a racial allegory that “uses analogy to open outward, to uncertain comparisons and subtle evocations that do not rely on equivalence” (131). Such contemporary fiction, Goyal contends, takes up and distorts the historical slave narrative to challenge linear narratives of Black progress and to refuse any simple figuration of a “post-racial” world.

One of the book’s most compelling chapters, “Talking Books (Talking Back)” attends to the historical trope of the Talking Book and to a number of contemporary writers who employ strategies of literary ventriloquism and surrogate authorship to disrupt the Western canon. Their work, Goyal argues, is able to “remake the relation between the objects that signify racist commodification and the literature and art that presupposes more complex representational aspirations” (145). By way of demonstration, Goyal leads us through a series of stunning texts: M. NourbeSe Philip’s stunning Zong! (2008); Robin Coste Lewis’s Voyage of the Sable Venus (2015); and recreations of Othello by Toni Morrison (Desdemona, 2012) and Caryl Phillips (The Nature of Blood, 1997). Her extended reading of Morrison’s Desdemona is, perhaps, the most significant in the book. Relaying the staged performance in detail, Goyal demonstrates how its layering of surrogate voices and (racialized) bodies lays bare “the politics of who speaks, and who listens”—and how the text speaks across time in echoes of Fanon, Gilroy, Conrad, and Benjamin (162). Goyal closes these readings with a poignant (and fitting) nod to Baldwin, but the chapter’s clear revelation is that Morrison—whose Beloved has haunted earlier pages and whose singular oeuvre demands of us “an imaginative reach” from U.S. slavery to global diaspora—lies at the very heart of Goyal’s project (169).

In her final chapter, Goyal takes up recent fictions of the African diaspora and the ways they reappropriate various forms and genres that move beyond Atlantic slavery. Contrary to prevailing criticism of the new diaspora, Goyal argues, such works constitute “elegant excavations of how the past appears in the present, meditations on space and time, deliberations of the ways books, people, and authors circulate in a world…unequal yet interconnected” (207). In other words, contemporary authors such as Chris Abani, Chimamanda Ngozi Adichie, NoViolet Bulawayo, and Dinaw Megestu eschew nation-centered narratives of slavery or immigration to imagine necessarily intersectional—indeed, global—Black subjectivities. If the readings here fail to cohere quite as neatly as in previous chapters, that only underscores the complicated and multivalent nature of such literature.

In a short epilogue, Goyal makes a move toward the didactic: although the history and national identity of the United States are necessarily rooted in the institution of slavery—and though its specter looms in an age of globalization—we fail to teach our students about slavery in any meaningful way. In this particular historical moment of border walls, xenophobic presidents, and forced transnational migration, why does there seem to be a fatigued will on the part of literary and cultural studies to move away from narratives of slavery? Instead, Goyal argues, “No such sense of critical exhaustion is in fact warranted, since we still have too few books about slavery, not too many” (212). The scope and breadth of texts in Goyal’s study is remarkable; it is still not nearly enough.

Runaway Genres is a study brimming with intellectual energy, a balance of expertise and curiosity that is accessible to students and scholars alike. Goyal is unafraid of posing honest, difficult questions—”What is the role of reading and writing in all this?”—that underscore the murkiness of ethics and human rights discourse and prove the urgency of her project (34). In that regard, she perhaps attends more to writers than to readers. This is apparent when she finds a possible answer in Octavia E. Butler’s Parable of the Talents: “Olamina again turns to writing as a way of making sure that she can still imagine a future…’My writing is a way for me to remind myself that I am human'” (34). But is reading just as much a tool for imagining the future, or a reminder that we are human? Itself an exercise in attentive reading, the book no doubt wants us to understand that it is. In this essential contribution to the field, Goyal lays bare the recursive pain of U.S. slavery, the challenges of writing and reading its “unspeakable” horrors, and what is at stake when we analogize slave narratives with contemporary crises across the globe.

Iana Robitaille is a PhD student at the University of Texas-Austin in the Department of English. Robitaille interests include 20th- and 21st-century literature and culture, global Anglophone literature, American transnationalism, postcolonial literature and theory, narrative theory, and the rhetoric of humor. Follow Robitaille on Twitter @iananotlana.

Comments on “Runaway Genres and the Global Legacy of Slavery”