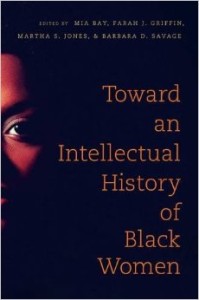 Today marks the beginning of a six day roundtable on the new collection, Toward an Intellectual History of Black Women, edited by Mia Bay, Farah J. Griffin, Martha S. Jones, and Barbara D. Savage. Today I am introducing the series. Hettie Williams will post tomorrow on Parts 2 and 3, Keisha Blain will follow with her post on “ The Global Dimensions of Black Women’s Intellectual History,” a consideration of the essays in Part 4, and Ashley Farmer will conclude the AAIHS portion of the roundtable with her essay, “Activist Intellectuals,” which also engages Part 4. During the next two days, Dr. Savage and Dr. Jones will respond to our posts.

Toward an Intellectual History of Black Women, comprised of 320 pages and fifteen chapters, has been gestating for over thirteen years, beginning with a conversation among the editors over dinner, out of which thirty scholars gathered at Rutgers University in 2002 for a working group hosted by Rutgers to conceptualize the way forward. From there, historians and literature scholars formed a “collective,” which Columbia University’s Center for the Study of Social Difference agreed to house and support. The text is composed of fifteen essays spread over five parts: “Diasporic Beginnings,” “Race and Gender in the Postemancipation Era,” “Redefining the Subject of Study,” “Intellectual Activism,” and “The Long View.”

Several questions arose for me as I sat down to introduce this roundtable on a book that is field-creating and field-defining. My questions may seem like something an advisor might ask their graduate student, (that is indeed when I first began to ask these questions), but I continue to ask them after practical experience in the administration of two new societies attempting to reinvigorate and/or invent fields (S-USIH and AAIHS). My questions are

When is it necessary to start a new research field? What might the disciplinary effects of starting that new field be? What about the implications for established and burgeoning academic societies? What justifications do we offer for founding a new field when speaking to scholars who already agree with us, with scholars who must be convinced about the validity of our subject, and with administrators trying to decide where finite budget resources should be directed?

The editors begin to answer some of these questions in the opening essay, where they establish just how limited the research on black women as the creator of ideas has been. In footnote seven, they list the absence of black women from two foundational intellectual history anthologies: David Hollinger and Charles Capper’s The American Intellectual Tradition (Oxford University Press, 2005) and Linda K. Kerber’s Toward an Intellectual History of Women (University of North Carolina, 1997). I would add that while there is now a sixth edition of Hollinger and Capper’s text (2010), it still has no essays by any women of color. It is still dominated by white men, with a few white women and black men also included. Toward an Intellectual History of Black Women‘s footnote seven continues with a list of six seminal works in black intellectual history that focus on few if any women.

Despite the travesty of this howling silence, I do not think we can take it for granted that filling this gap is justification enough for the text. The editors recognize this and argue that black women as producers of ideas must be written about because they “have provided critical insight into issues of national and global importance” and because their ideas, emerging from lived experiences “at the crossroads of race, gender, and justice,” are “distinctive but often ignored.”

And yet, as I thought about the introduction, I found myself wishing I had a more concrete idea from it of what the editors believed that distinctive contribution was. Why, for instance, should we have a text on black women’s intellectual history, mostly but not solely focused on the US, stretching across more than two decades, rather than, say, an intellectual history of slavery that includes black women’s voices as one of many? Or a history of modernism in the early twentieth century that includes blues lyrics and Zora Neale Hurston?

What, in other words, might be included in a course proposal that would convince an entire liberal arts college that a course in black women’s intellectual history was worthy (an exercise each of my new courses engage in)? Or, for an example even closer to home, would the editors and authors suggest forming a new society and blog that focuses only on Black Women’s Intellectual History or would they find a suitable home at AAIHS? Why, in fact, did we founders of AAIHS feel the need to create it rather than finding space within older, more established scholarly organizations like ASALH, the OAH, or the new and influential Society for U.S. Intellectual History, itself born out of a listserve and a blog?

The editors provide an answer to some of these questions by noting that the realm in which black women operated, a place of self-education where they had to battle “with both sexism and racism,” is in part what makes black women’s history unique. They answer my questions further in the form of more questions that the essays in the collection begin to answer and that they encourage future writters to tackle as well:

I would add to those questions—who is black, who is a woman, who are intellectuals, and what are ideas?

1. Is there something profound in discussing the African Diaspora as a whole or is there too much diversity within that Diaspora to hold a field together?

2. In terms of who is a woman, why do the editors raise racism and sexism, but not gender-identity discrimination or homophobia? Is Nancy Kelley a woman they’d include in future work? Is thinking about the boundaries of identity groups distracting or useful in general and for your work in particular?

3. With regards to the intersection of intellectuals and ideas—all people have ideas, but I would argue not all people are (or would want to be) intellectuals. Which, then, would the editors include in this field? How do they grapple with the challenge facing all intellectual historians, but especially those of a marginalized people who were outlawed from learning to read for centuries? Can intellectual history be written from material objects (like quilts or pots) or does it require text? If it requires text, can it only be developed from text by a black woman or is it possible to recover black women’s ideas from the ways others, usually those in positions of power and with many misconceptions clouding their knowledge, wrote about them and their ideas? How do we recover the ideas of a group of people known for dissembling in order to protect their precious sense of self from systems designed to usurp them of their dignity?

I had intended to speak to Part 1 of the book as well as the introduction, but I think I will leave this here. I want to emphasize that I am overwhelmingly enthusiastic about what this work represents and the foundation it has laid for future scholars and teachers. Let this collection provide the wind at our back as we create classes, develop dissertation topics, put together conference panels and calls for papers, and define new positions in our departments.