loading...
By Michael T. Barry Jr. October 21, 2017 Comments Off on “Rikers: An American Jail”: A New Film on Mass Incarceration

This post is part of my blog series that announces the release of new films in African American History and African Diaspora Studies. Today, I am featuring “Rikers: An American Jail”  which is currently screening at locations across the country and is streaming at RIKERSfilm.org.

With an introduction by executive editor Bill Moyers, this one-hour documentary was collaboratively produced by Moyers and his colleagues: executive producer Judy Doctoroff and producers Marc Levin, Mark Benjamin, and Rolake Bamgbose. A broadcast journalist for more than four decades, Bill Moyers has been recognized as one of the unique voices of our times, with more than 30 Emmys, two Alfred I. duPont-Columbia University Awards, nine Peabodys, three George Polk Awards, and many other distinctions. Judy Doctoroff has worked with Moyers for more than three decades on many of his award-winning productions and is now president of Public Square Media. The award-winning filmmakers Marc Levin and Mark Benjamin are founders of Brick City TV. Their groundbreaking feature film, Slam, won both the Grand Jury Prize at the Sundance Film Festival and the Camera d’Or at the Cannes Film Festival. Rolake Bamgbose joined Levin and Benjamin to work on Rikers, and she is currently a producer at Vice News. Read more about the filmmakers at RIKERSfilm.org. Follow them on Twitter @RIKERSfilm. 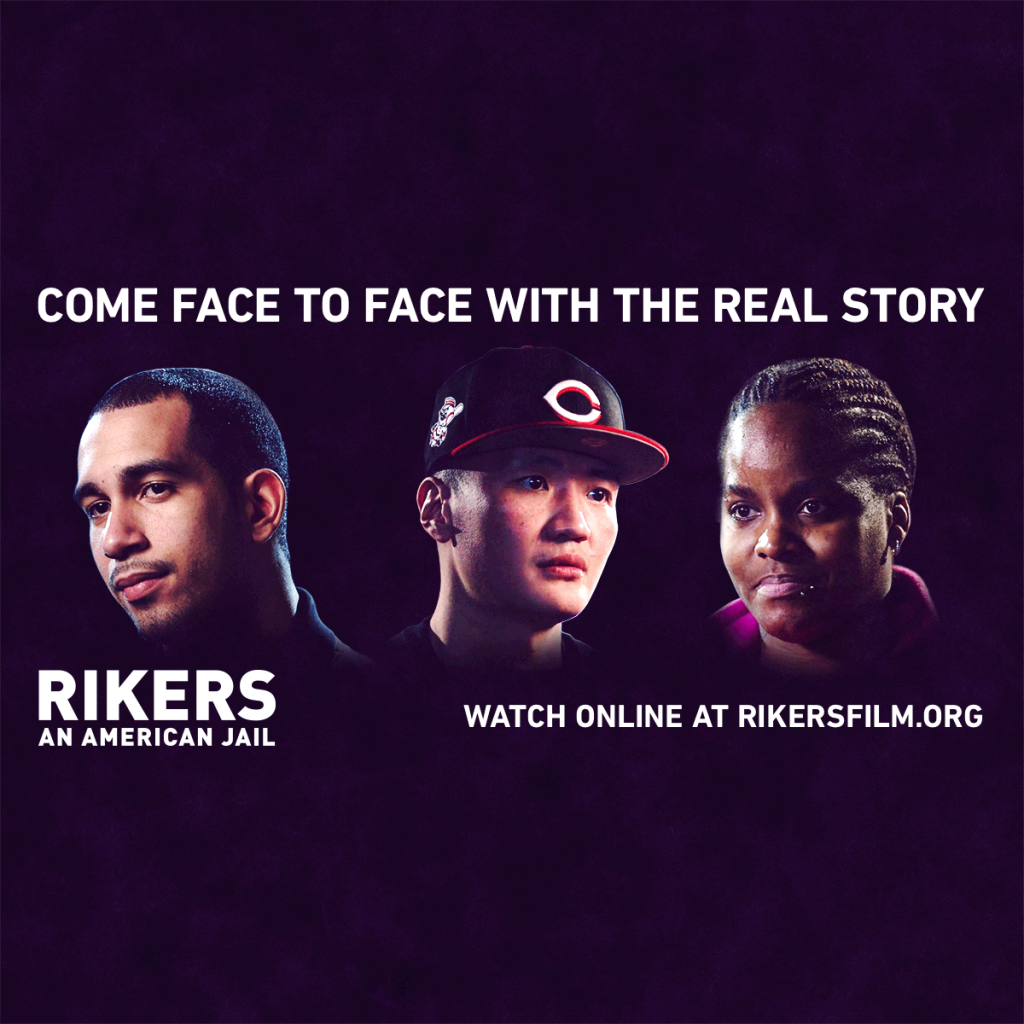 The United States is facing a crisis of mass incarceration with over 2.2 million people packed into its jails and prisons. To understand the human toll of this crisis, Rikers Island is a good place to start. Of the more than 7,500 people detained at Rikers Island on any given day, almost 80% have not yet been found guilty or innocent of the charges they face. All are at risk in the pervasive culture of violence that forces people to come to terms with what they must do for their own survival.

Rikers: An American Jail, a riveting new award-winning documentary from Bill Moyers, brings viewers face to face with men and women who have endured incarceration at Rikers Island. Their stories, told direct to camera, vividly describe the cruel arc of the Rikers experience—from the shock of entry, to the extortion and control exercised by other inmates, the oppressive interaction with corrections officers, the beatings and stabbings, the torture of solitary confinement and the many challenges of returning to the outside world.

The inmates vividly articulate the experience of entering the notorious facility on Rikers Island in New York’s East River; the brutal struggle for survival in and out of solitary confinement; then grappling with release back into a disorienting world where being branded an ex-con makes finding a job nearly impossible.”-Ed Rampell, The Nation

Michael T. Barry Jr.: How does the medium of documentary film help to uniquely expose new ideas regarding mass incarceration?

Bill Moyers: Rikers Island is New York City’s largest jail. You can easily see it when you land on the main runway at LaGuardia Airport – so close and yet so far from the daily lives of millions of New Yorkers. Most of us are oblivious to what happens inside our jails and prisons, so as conditions worsened, and abuses mounted, for a long time there was very little public outcry about Rikers. There was, however, a growing body of great reporting about what was happening there – in the New York Times, The New Yorker, New York Magazine, and others. But the nature of the print media meant that the testimony of the detainees of necessity was filtered through the journalists. We wanted to explore the human toll of the experience of mass incarceration by letting former detainees speak in their own words and in their own voice directly to the camera, and we thought that would add another dimension to the excellent print journalism.

Our team was lead by Marc Levin and Mark Benjamin, two terrific filmmakers who have a lot of experience filming inside jails and prisons. They were joined by a young African-American journalist, Rolake Bamgbose, who was relentless in tracking down former detainees and engaging them in opening up memories. Criminal justice organizations in New York as well as organizations that specialize in re-entry programs and transitional houses helped us to locate people to interview.

In talking to almost one hundred former detainees we heard similar stories that seem to echo through the years. Inmates intimidate each other. They steal from each other. Attack each other. Beat each other. Some corrections officers abuse their power. The noise is unsettling and disturbing. Their psychological stress is major, they get depressed and experience incredible anxiety. How so many survive is difficult to grasp. Once we had narrowed down the number of primary story-tellers in the film to about a dozen, we checked out their descriptions of what they experienced. There are “use of force” reports, civil suit documentation and other public records that substantiate their memories of life at Rikers Island Jail. One former inmate who attended screening of the film said softly as the lights came back up in the room, “Everything in there is true.”

Glenn Martin, who was detained at Rikers island, founded the organization JustLeadership USA to empower formerly incarcerated people to have a voice in criminal justice reform. He has said, “Rikers is every jail, and every jail is Rikers.” It seems obvious to me that if the public is going to support criminal justice reform, we need to understand what is happening in America’s jails with our tax dollars, in our name, and purportedly for our safety. In one of his plays Tom Stoppard says that people do terrible things to each other, but it’s worse when they’re done in the dark – that is, out of sight. Rikers: An American Jail tries to bring the issues into the light.