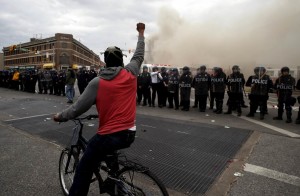 Here at AAIHS, my 2015 blog postings began with a reflection on remarks made by Chief Supreme Court Justice Roger Taney during the Dred Scott decision.  Recently, Antonin Scalia made comments on the intellectual capabilities, or lack thereof, of African Americans.  The comments of these two Supreme Court Justices 150 years apart bookend this complex year for African Americans.  Although historian’s rarely engage in predicting the future, I cannot help but wonder how future scholars may interpret 2015.

Future scholars may examine what is happening among black historians.  During the centennial year of the Association for the Study of African American Life and History, scholars continue to bridge the connection between scholarship and contemporary society.  Perhaps the future scholar will come across the archives of our own blog.  Imagine a scholar sitting in a futuristic Star Trek or Doctor Who-like library winding her way through the digital records.  A more detailed analysis of our own blog may direct a scholar to postings like: Ashley Farmer’s What is Past is Present: Teaching Black Student Protest at Duke, Brandon Byrd’s Introduction to the #MizzouSyllabus, or even my own Integrating the Baltimore Riot into a Civil War History Class, An Improvised Lesson.  She might find the popular #CharlestonSyllabus reading list which continued to circulate in cyberspace as a creative intellectual discourse in the aftermath of the Mother Bethel shootings in Charleston.

#Charlestonsyllabus would not be possible without social media.  A future scholar may investigate the complex digital entity known as black twitter.  Black twitter offered hilarious comedic exchanges like: #ifhogwartswasanhbcu, or #thanksgivingwithblackfamilies.  Yet it also offered eviscerating satire in the case of Rachel Dolezal, the white woman in Spokane who portrayed herself as black, with the #AskRachel. Black twitter proved in the equalizing space of the internet it could provide biting satire and humor; however, its commentary extended to the difficult topics of oppression and violence.

Twitter and other social media were equally compelling in the case of racial violence. Social media would offer an alternative to mainstream news media coverage.  Over the last year, the digital platforms would offer images and stories of police brutality like Sandra Bland.  #Blacklivesmatter moved from being a simple hashtag to a concerted movement.  Social media was critical during the riots in Baltimore offering better insight into what was happening than the news coverage. In the aftermath of the shootings in Charleston, the digital platform was a place to express grief, anger, and frustration as well as praise for Bree Newsome for climbing the flag pole to tear down the Confederate flag.

A future history student may find 2015 perplexing with the numerous acts of racial violence as well as vitriolic rhetoric from presidential candidates.  Without the comparison of achievements by African Americans, 2015 could appear as inhospitable to blacks as it was over one hundred years earlier.  However, this year the fiftieth anniversary of the Voting Rights Act was celebrated.  Selma, the first film directed by an African American woman to be nominated for Golden Globe awards and the Oscars.  Thursday nights continued to be dominated by Shonda Rhimes.  Loretta Lynch became the first African American woman to serve as Attorney General for the United States of America.  These achievements add to the complexity of African American life in 2015, and cannot negate the oppression and violence of the past months.

2015 has been an eventful year.  Our successors will not appreciate all the nuances of the year, but they will have the benefit of hindsight to connect 2015 to 2016.  We will have to wait to see 2016 unfold.  We know there will be the unpredictable, unanticipated events.  But there will also be anticipated events like the AAIHS conference March 10 – 11, 2016 in Chapel Hill, NC.  Help us have an even better year in 2016! Contribute to AAIHS!