Since the 1970s, the national identity of Canada has been firmly associated with the concept of multiculturalism. Promoting national culture through popular government-funded media, like Heritage Minutes, the Canadian state and society has been portrayed as a haven free from the centuries-long histories of racial inequalities found in the United States and elsewhere. However, over the course of its history, Canada and its governments have actively seized Indigenous lands, broken treaties made with sovereign Indigenous nations, enslaved both Black and Indigenous peoples, and have consistently engaged in systematic socio-economic discrimination by racializing certain immigrant groups.1 For example, during the era of the Underground Railroad, when both free and enslaved Black American emigrants came to Canada West (present-day Ontario), they were subjected to racially segregated schooling in several of the cities in which they settled, such as Chatham and Windsor. The last racially segregated school for Black Canadians in Ontario closed in 1965 and 1983 in Nova Scotia.

Beginning in 1867, the Canadian government established a system of residential schools where Indigenous children were taken from their homes and communities where they were stripped of their cultural identity and faced a myriad of state sanctioned and enforced abuse and violence.2 The last of these residential schools closed as recently as 1996. Contrary to its self-proclaimed multiculturalist narrative touting moral exceptionalism, Canada has its own system of racialized oppression and colonialism. What sets it apart from other nations is Canada’s callous disavowal that this system every existed in the first place, and moreover that it continues to exist to this day. The masking of Canada’s identity in a shroud of multiculturalism has created a means to avoid issues of racism and colonialism, creating a system where race-based prejudices exist and continue to fester, but are rarely acknowledged, much less addressed.

The Canadian university system—often considered a liberal bastion of progressive ideas—is no exception to this institutionalized racism. The insidious nature of this particular racial state is indicative of the race problems Canada has yet to reconcile. In the face of this climate, The Equity Myth: Racialization and Indigeneity at Canadian Universities provides a multi-authored study that examines the experiences of racialized and Indigenous faculty members at multiple English-speaking universities in Canada to challenge the degree to which universities are actually committed to equity.

The Equity Myth by Frances Henry, Enakshi Dua, Carl E. James, Audrey Kobayashi, Peter Li, Howard Ramos, and Malinda S. Smith, is the first comprehensive data-driven study on the subject. Drawing from their expertise in anthropology, education, and women’s studies, as well as geography and sociology, the authors demonstrate a wide range of perspectives and expert opinions—yet each author’s contributions highlight the consistent pattern of their experience as racialized faculty. It should be noted that “Indigeneity” is treated as a separate term by the authors, as they wished to acknowledge the complex intersections of racialization and colonization experienced by Indigenous peoples in Canada.3 Combining diverse methodological approaches, The Equity Myth uses statistics, survey data, university policies, and interviews to demonstrate that the ostensibly inclusionary and professed “colour blind” policies and rhetoric promoted by Canadian universities run in stark contrast to the marginalization and unfair treatment experienced by racialized and Indigenous faculty members. 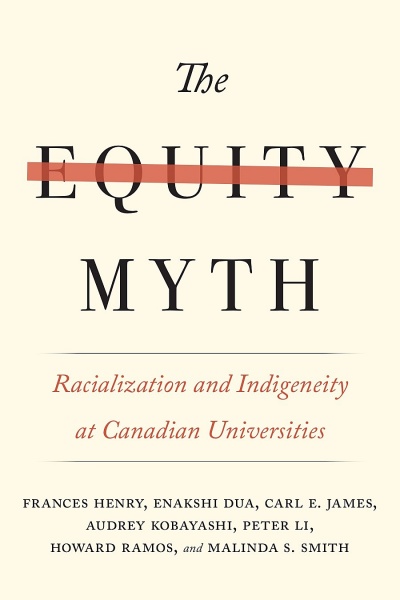 The book highlights the multiple ways that processes of racialization and Indigeneity operate in universities. Examining this through representational diversity in hiring, tenure and promotional practices, institutional biases and barriers to success, policies meant to promote equity, the social construction of ideas about equity, and the ways in which universities characterize themselves as equitable. Unapologetically candid with their research findings, The Equity Myth shows that racialized and Indigenous scholars are hired less often (especially in the social sciences and arts and humanities), are least likely to be considered and granted promotions and tenure, are overworked and underpaid in comparison to white colleagues, and their work is less-valued, particularly if such work focuses on race and Indigeneity. This book also exposes the ways that the universities’ equity policies—designed to remedy institutionalized racism—are ultimately ineffective. For example, the authors note that many university equity offices are underfunded with overworked staff, and a number of interviewees indicated that issues of inequality which equity offices attempted to address were often dismissed outright. Others indicated that most university administrators to whom equity offices needed to report were ill-equipped to address equity concerns. Overall, this scholarship demonstrates a need for Canadian universities to address race in academia as a structural problem rather than a personal one.

These authors argue that that since the mid-1980s when policies surrounding equity and diversity were first introduced in Canada, the implementations of the policies—such as the hiring of diverse staff—have at best become stagnant (a lip service noted on job calls but not adhered to) and at worst have been disregarded outright. Of particular note in regards to such issues are Chapter Four, “Academic Production, Reward, and Perceptions of Racialized Faculty Members,” and Chapter Five, “‘Would Never Be Hired These Days’: The Precarious Work Situation of Racialized and Indigenous Faulty Members’” wherein the authors discuss the benchmarks of tenure and promotion as well as the experiences of such faculty members who are denied these opportunities. One of the important frameworks that this book highlights throughout its many chapters is that the modern university is a neoliberal institution. The authors identify neoliberalism as “the dominant governing rationality of the late twentieth and early twenty-first centuries” and consider how its economic effects have resulted in

the withdrawal of government support for most forms of anti-oppression, including anti-racism, social research, and community engagement; the reduction, indeed the demonization of the third sector; and the defunding of grassroots and nongovernmental organizations, including those engaged with Indigenous, environmentalist, and social justice issues.”

The authors argue that the neoliberal refusal to examine social issues such as the inequality experienced by racialized and Indigenous faculty results in Canadian universities, which utilize the presence of such scholars to showcase diversity in faculties, but which do little to ensure their success.

The Equity Myth contends that Canadian universities believe that experiences of racism and racial diversity alike are “located in the bodies of individuals rather than constitutive of institutions” (12). Accordingly, in keeping with the claims (but not the substance) of diversity, administrators treat instances of racial discrimination as anomalies caused by individual action rather than as a structural part of the Canadian neoliberal university system. This stance, culminating here in its modern post-secondary form, is merely a continuation of the centuries-long intersection of Canadian moral exceptionalism and disavowal of racism juxtaposed with the lived reality of racialized and Indigenous Canadians.

One of the most valuable aspects of this book is that it is informed by the personal experiences of the racialized and Indigenous members of university faculties, in which these individuals have the opportunity to resist and speak out against the inequalities they experience as members of the academic workforce. Throughout the chapters, the voices of faculty members affected by these policies are emphasized through interviews. The addition of excerpts from these personal interviews help to demonstrate the multiple ways in which racialized and Indigenous faculty are denied equal opportunities for upward mobility and tenure in towards positions of full professorship. Respondents indicated that they experienced disproportionately higher administrative and mentoring workloads, lack of academic respect for publications (especially those published in non-Western journals), lack of access to grants, and an administrative reliance upon teaching evaluations which do not consider racial bias. It is through these interviews that the authors highlight one of their main points: that hyper-individualistic ideologies surrounding racism and equity do not—and cannot—address the institutional racism that exists within the academic system.

The Equity Myth discusses the modern and contemporary issues facing racialized and Indigenous faculty members. By emphasizing, in their own words, the ways in which Canada’s own university system fails to adequately include—and is actively structured to undermine and exclude—racialized and Indigenous faculty, the book contributes towards debunking the long-held view of Canada as a country in which such issues as structural racism do not exist. Throughout The Equity Myth the authors highlight a serious problem in Canadian academia as a whole, in that the institutions which are viewed as centers of progressive thought, and which tout policies of inclusiveness and diversity, are still consistently failing when it comes to hiring, promoting, and supporting racialized and Indigenous faculty. In fact, the authors state that the choice to emphasize the Canadian university was in part as a means of critiquing the continuing presence—and prevalence—of structural and institutional racism in Canada. The disruption of the narrative surrounding Canadian universities—and by proxy Canada as a whole—through the voices of scholars whose lives are so entangled with the issues they both research and experience makes this book a welcome addition to the existing scholarship on Canadian racism.

Deirdre McCorkindale is a Ph.D. Candidate at the Queen's University in Canada. Her research examines the issue of race within Canada and the United States with an emphasis on African-American and African-Canadian history. Under the supervision of Dr. Barrington Walker, her dissertation analyzes a 1930s racial intelligence study of Kent County's Black schoolchildren which detailed the history of nineteenth-century Black education in Kent County.

Comments on “Race and Racism at Canadian Universities”