With the recent election of Donald Trump and the very public hate speech and violence against people of color that accompanied his campaign, it seems fitting to revisit some of the best works on black and brown community organizing against white supremacy. This month I had the pleasure of interviewing Sonia Lee about her book Building a Latino Civil Rights Movement: Puerto Ricans, African Americans, and the Pursuit of Racial Justice (Chapel Hill: The University of North Carolina Press, 2014). Professor Lee’s work analyzes Puerto Rican and African American collaborations from the 1950s through the 1970s. Sonia Lee is an Associate Professor of History at Washington University in St. Louis. Her research focuses on the ways in which the labor economy, social movements, electoral politics, housing reforms, educational curricula, and mental health treatment shaped contemporary notions of race and ethnicity in the United States.

Devyn Spence Benson: The book traces the rise and decline of Puerto Rican and African American political alliances in New York in the 1960s. How did you become interested in this topic?

Sonia Lee: One of my first experiences of Americanization as a Korean immigrant from Brazil was the L.A. riots of 1992. At the time, my parents’ business was not directly impacted by the riots, but we were still pretty shaken up by the event. I had questions about the reasons why there seemed to be so much conflict between Korean American business owners and their black customers, but I had no answers. Fast forward four years, and I was in the middle of a campus debate at the University of California, Berkeley, about Prop 209, which ultimately resulted in the prohibition of affirmative action at UC campuses. I was taking Professor Leon Litwack’s course on post-1865 African American history that semester, and he did a teach-in about the history of affirmative action and racial inequity in the U.S. That lecture impacted me deeply. For the first time in my life, I felt that a historical explanation for one’s stance on a public policy was intellectually satisfying. I learned that history matters. 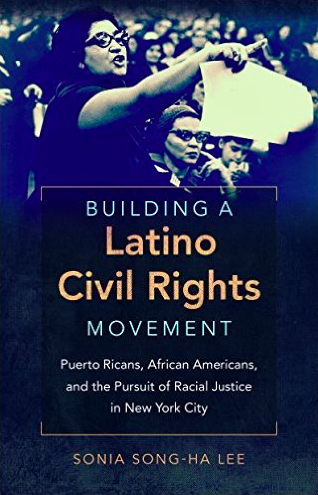 While I was going through my doctoral program at Harvard with Dr. Evelyn Higginbotham, I read Altagracia Ortiz’s analysis of black and Puerto Rican garment workers’ failed coalition in the International Ladies Garment Workers’ Union. I was fascinated by her analysis, but I knew there was more. This was 2003, and there were all kinds of discussions going on about the fact that Latinos had surpassed African Americans as the largest minority group in the U.S. and what that would mean for Black-Latino politics. That’s when I got hooked on my research topic.

Benson: You use over thirty oral histories to trace moments of collaboration and distance between African Americans and Puerto Ricans. What were some of the challenges and benefits of doing oral histories for this book?

Lee: Doing oral histories was the most life-giving experience I had as a graduate student. I loved meeting political activists, listening to their memories, and learning from their still vibrant political visions. I was deeply touched by their generosity—some of them met with me several times, read my manuscript, and gave me feedback. Many of them expressed a personal investment in seeing my work published.

Not surprisingly, it was hard to create a distance between myself and my interviewees when I had to incorporate their memories into the overall historical analysis. Since the mainstream media’s narrative focused on accounts of Black-Latino conflict at the time, many of my interviewees constructed their stories as a counter-narrative, exaggerating the history of political unity between the two groups. As amazing as these political activists were, I also learned that many of them were not above the temptation of self-elevation based on narrow definitions of “radicalism” and “working-class” politics. It took me several years to sift through their memories, to contextualize them within the broader history of New York City and the U.S., and to analyze their historical significance in a fair and accurate manner.

Benson: Chapter Five was my favorite chapter! In it you chart the ways that Puerto Rican and African American nationalisms overlapped (briefly) in the 1966 movement advocating for for community control over NY schools. What allowed for these collaborations and why did they dissolve?

Lee: Puerto Ricans had historically equivocated on their racial status, but deindustrialization, urban renewal, and the culture of poverty discourse led them to publicly acknowledge their commonalities with African Americans in the post-World War II era. Deindustrialization stripped black and Puerto Rican workers’ ability to access good-paying jobs. Urban renewal led black and Puerto Rican migrants to live in increasingly segregated public housing projects. These processes remained outside of the control of poor blacks and Puerto Ricans, but their poverty was blamed on their “cultural pathologies.” It no longer mattered that some Puerto Ricans were lighter-skinned and others were darker; their entire culture was marked alongside black culture as “deprived.” As black and Puerto Rican New Yorkers fought against the racializing impact of the “culture of poverty” discourse, they developed a common antiracist sensibility.

The War on Poverty and the black freedom movement provided vital organizing spaces for blacks and Puerto Ricans who became invested in each other’s liberation. The War on Poverty created a flexible ideological space in which Puerto Ricans could redefine their racial identity as an “ethnic minority” and political identity as a predominantly “working-class” community. The Black Power movement inspired Puerto Rican activists to follow a similar model of political and cultural self-determination. As black and Puerto Rican nationalists supported each other’s liberation movements, they built a universal vision of cultural pluralism.

Black-Puerto Rican coalitions dissolved in the 1970s as a result of external political repression and internal class divisions. White ethnic leaders attacked black and Puerto Rican nationalists as “reverse segregationists.” Black and Puerto Rican activists lost their own internal sense of cohesion, as class fractures within their own communities led them to lose their morale and mutual trust.

Benson: With the election of Donald Trump, it seems more important than ever for black and brown communities to work together to resist institutional racism and white supremacy. What lessons does your research offer for contemporary Latin@ and African American partnerships?

Lee: Now, more than ever, we must make a choice to build unity across difference. To create a “people of color” agenda that does not recognize the particular challenges that each community faces is offensive. To ignore the common challenges that blacks and Latinos (and so many other marginalized groups) face in this post-Trump world, however, is senseless. So when we talk about the challenges that we face today, we can frame undocumented immigrants’ fear of deportation as a “Latino” issue; Muslim women’s fear of wearing a hijab as a “Muslim” issue; the struggle against the Dakota pipeline as a “Native” issue; or we can simply view all of these as an attack against humanity.

As Democrats are struggling to find their own footing against an America that is explicitly racist, it may be tempting to try to build a working-class politics that erases racial/ethnic differences. We may feel nostalgic about FDR’s era, and mistakenly remember the 1930s as a time when social reforms benefited Americans universally. Most likely, we are also influenced by the myth that the Black Power movement was a violent, hateful movement that unnecessarily created conflicts between blacks and whites. So we see the current Movement for Black Lives through this lens. But we must remember that the Black Power movement’s political legacy was much broader and more universal: it called for the self-determination of any group of people whose humanity that been violated. The idea of “Black Power” was threatening to those who wanted to preserve white supremacy, but it was empowering to everyone else. We must remember this history, as we seek to build not only a new labor economy, but also a democracy that includes plural identities.

Devyn Spence Benson is an Assistant Professor of Africana and Latin American Studies at Davidson College and the author of Antiracism in Cuba: The Unfinished Revolution (UNC Press, 2016). Benson received her Ph.D. from the University of North Carolina-Chapel Hill in the field of Latin American History, where her research focused on racial politics during the first three years of the Cuban revolution. Follow her at Twitter @BensonDevyn.

Comments on “Puerto Ricans, African Americans, and the Pursuit of Racial Justice: An Interview with Sonia Lee”