loading...
By Sasha Turner, Barbara Molony, and Sandra Dawson April 7, 2018 Comments Off on On Stanford’s All White Male History Conference

In December 1969, a group of historians organized the Coordinating Committee of Women Historians in the Profession, which, in 1995, joined forces with the Conference Group of Women’s History to become the Coordinating Council for Women in History (CCWH). Both organizations arose from divergent, but overlapping goals to support women students and faculty and to secure greater inclusion of women in the research and teaching of history. At the time of these organizations’ founding, the American Historical Association (AHA) and the history profession in general were deemed “a gentlemen’s protection society… openly supporting practices of sexism, racism, classism, heterosexism, and anti-Semitism.” With a woman historian and a scholar of women’s history now at the helm of the AHA (Mary Beth Norton), and more broadly, the addition of women historians and women and gender history to departments and curricula across the country, few would dispute that the AHA and the history profession have become more inclusive.

Yet, the recent all white male history conference held at the Hoover Institution, Stanford University seems to suggest a return to history’s dark age as a gentlemen’s protection society. Happily, the strong and growing presence of and disciplinary focus on women in history as well as the sharp criticism and condemnation (and rightly so) of the exclusive conference make clear that a return to great white men history and historians is a fantasy. Even so, the holding of this conference and others of its kind reflect the ongoing challenges women historians and women history face.

The CCWH strongly condemns the choice of holding an all-white, all-male conference at Stanford University, and expresses concern regarding its implications for the historical profession and for its treatment of women in history.

Conference organizer and senior Fellow at the Hoover Institution Niall Ferguson defended that the exclusion of women was not deliberate and that the women invited to participate in the panel had declined to do so. Yet, it seems that the lack of diversity stemmed more from deliberate omission than packed schedules. One is hard-pressed not to view the conference Ferguson organized through the lens of his acceptance speech for the 2016 Philip Merrill Award for Outstanding Contribution to Liberal Arts Education. While admitting that various social and economic reasons account for the decline in history in the last several decades, Ferguson argued that the changing content of history is the “best explanation.”

Such content changes, Ferguson explained, are the decline in diplomatic and international history; legal and constitutional history; and intellectual, social, and economic history, on the one hand, and the growth in women and gender history; cultural history; history of race and ethnicity; and environmental history, on the other hand.  Challenging the larger significance of courses that center women, including one on women and mental illness offered at Stanford University in Fall 2016, Ferguson remarked that such subjects are certainly less important than investigations into how the United States became an independent republic, for example. The problem with “the new history that’s displaced the old,” Ferguson bemoaned, is that “some are so disconnected from contemporary concerns that it is little better than the antiquarianism scoffed at” by the discipline’s forbearers. Others are so overly politicized, “so skewed by contemporary concerns,” that they are ahistorical and anachronistic. 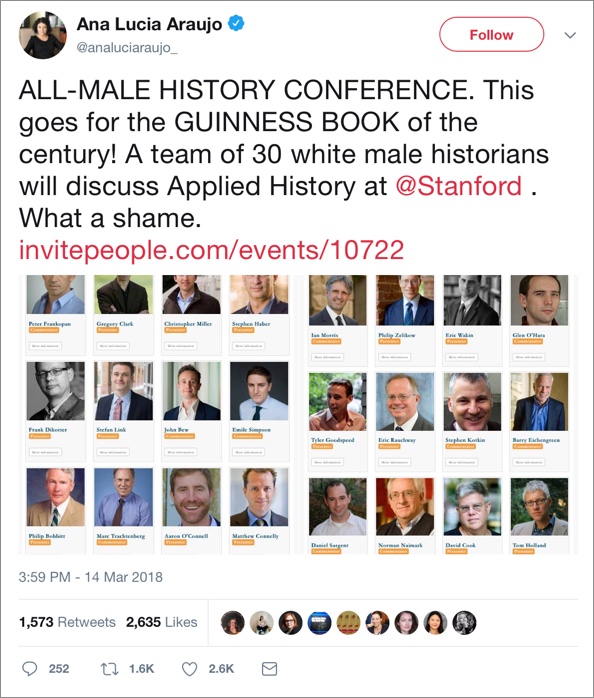 To be sure, one can hardly gain a critical understanding of women in history by perusing course description and titles. Undeniably, American independence is among the most significant events in the history of the United States. And yet, the question of the historical event of independence is less significant than questions about the nature of the revolution and how revolutionary it might have been. To engage meaningfully in key debates about the revolution, whether it was conservative or radical, is to engage women, race, and gender history and historiography. Diverging from older historical definitions of the revolution as radical, new critical race and gender histories defined it as “the illusion of change.” Women, black people, and Native Americans saw their conditions worsen, their liberties restricted, and rights of citizenship denied after the Revolution. The broadening of the study of the American Revolution beyond the merchant class and wealthy elites, for example, yields a more inclusive history. Resulting debates about how radical the revolution was has also led to the reconceptualization of American history and democracy.

Chiding the so-called new parochial histories as overly political and as importing too much politics into the classroom, it seems quite the double standard (pun intended) when we consider that the conference aimed to discuss questions like, “Are recent developments in American politics unprecedented, or is Trump merely populism revisited?” and “What can we learn from past attempts to learn from the past?” Undoubtedly, one can no more take the politics out of legal and constitutional histories of the United States than they can pretend that American constitutional history is devoid of race and gender politics.  Women’s struggles today for bodily autonomy and greater participation in politics, law, and governance, are rooted in the fact that none of the original authors of the constitution were women. That people of different genders, races, religions, and sexual identities are currently marginalized as interpreters of the Constitution is the direct result of the writing of a constitution that defined political activity in white and masculine terms. Needless to say, how does one discuss recent developments in American politics and Trump’s populism without a critical engagement with American race and gender history and its pivotal role in the election campaigns and voting patterns?

As we contemplate the ways in which the Stanford conference makes it clear that the vestiges of history as an old boy’s club linger, it is difficult not to address the club’s twin pillars: sexual harassment and assault.  The recent panel discussion at the AHA along with Catherine Clinton’s presidential address at the Southern Historical Association have made plain that the history profession is not immune to the problem of sexual abuse that plagues other spaces.

But women and girls today have inherited centuries of male orchestrated legal systems that sanction sexual violence. Although now illegal in the US, marital rape, for example, received legal grounding on the assumption that wives “belonged” to their husbands and therefore could not be raped. Further still, during American chattel slavery, while white women gained some protection from rape, black women, deemed property, could not be raped. To be sure, the persistence of the erroneous view that black men are sexual predators, particularly threatening to white women, and the remarks made by Donald Trump’s lawyer,

Michael Cohen that “it is impossible to rape one’s spouse” (for which he subsequently apologized), highlight how social attitudes outlive legislations.  The outlawing of spousal rape in the US in the late 1970s was a direct result of women’s rights campaigns and the insistence that such subjects as women and rape have historical merit.  Such histories have also yielded insight into the ways in which power is exerted through sexual acts. By tracing the perpetrating of rape, for example, across social and cultural settings, geographic and time boundaries, historians have shown the use of sexual violence as tools of social control and domination.

The persistence of sexual violence further makes clear that statements of regret and condemnation, while important, are insufficient to address deep-seated problems of sexual harassment and abuse. In addition to continued investment in such fields as women, race, and gender, outdated and bureaucratic processes that make accountability and redress impossible must be eliminated.  In contrast to the all white men conference, the democratization of history is incumbent upon women and minorities having a seat at the table and access to power and prestigious positions.

*A version of this post first appeared on the History News Network.

Sasha Turner and Barbara Molony are Co-Presidents of the Coordinating Council of Women Historians. Sandra Dawson is the Executive Director.