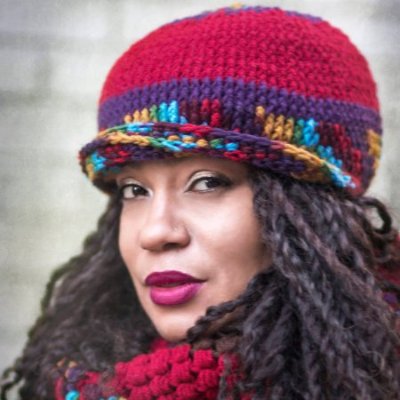 This interview is based on an oral history that I collected with Washington, D.C.-grown and Bronx, New York-based playwright Nina Angela Mercer on May 29, 2016.1 We discussed the primary influences shaping her work as one of our generation’s great playwrights, cultural workers, and community builders. Mercer’s plays include Gutta Beautiful; Racing My Girl, Sally; Itagua Meji: A Road & A Prayer; Gypsy & the Bully Door; and Mother Wit & Mother Born. She is currently developing a new play, Between Whispered Blood-Lines, the first in a trilogy. Her work has been shared at the Warehouse Theatre, The Woolly Mammoth Theatre Company for DC’s Fringe Festival, Rutgers University-Newark and New Brunswick, Wings Theatre, Brecht Forum, The Classical Theatre of Harlem, Dr. Barbara Ann Teer’s National Black Theatre, the Nuyorican Poets’ Café, Abrons Arts Center/Henry Street Settlement, Dumbo Sky, and the Little Carib Theatre. Her writing is published in The Killens Review of Arts & Letters and Black Renaissance Noire, among other upcoming publications. She is a co-founder and co-director of Ocean Ana Rising. Mercer has taught at Medgar Evers College-CUNY, Howard University, University of Maryland-College Park, and American University. She is currently a doctoral fellow of Theatre and Performance at The Graduate Center-CUNY. She teaches at Brooklyn College and is also a member of the collective Black Women Artists for Black Lives Matter. Mercer is also mother to two daughters, which makes her slightly outnumbered at home. Updates about productions, performances, and other musings can be found at her blog.

J.T. Roane: What early influences shaped your conception of performance?

Nina Angela Mercer: Growing up in D.C., my first job was my summer youth job through Mayor Marion Barry’s Summer Youth Employment Program (SYEP) in the 1980s. Because I took dance classes with Joyce Mosso’s Creative Dance Company and she was employed by D.C.’s Parks and Recreation department, when I turned fourteen, I was brought in along with other young women and men to work for the Show Mobile Program (SMP). The SMP was part of an evolution in programming that began with urban renewal projects.

I didn’t know this when I was a kid, but my dad, John Mercer, former lawyer and manager of the GoGo band Experience Unlimited, used to work at this place called Fides House. It was a community center run by the Catholic Church. It was a place where kids from the Shaw neighborhood would come and hang out. They had tutoring there. My dad became an active worker there while he was a student at Howard University’s law school.

Once, the police raided the place, primarily because it was a refuge for Black youth. My father became an advocate for them. He played trumpet, and he knew some guys who were musicians. They started teaching the kids how to play. They believed instruction in music and performance would benefit the youth. They went to the city and demanded some funds to help get these youth into a band. They got instruments and trained them. They started traveling around the city doing shows as a band called The Wild Bunch. This model spun out to other community centers.

The SMP, led by Gilbert Pryor training youth musicians and other professional artists, was modeled after what my father helped initiate in the late 1960s. In the program, young people from the city were trained to perform a musical revue that tracked our history as Black people in music and song.

We trained on Park Road in Northwest D.C. in an old firehouse, right around the corner from the Black Hole, what people call Celebrity Hall, that hosted GoGo’s. In August we performed in all four quadrants of the city. It was a way of learning and sharing our history through music and dance.

Roane: Where did you all travel with the show?

Mercer: We went to various public parks: King Greenleaf in Southwest, Barry Farms in Southeast, and Banneker Park in Northwest, and others. We interacted with people for free performances all over the city. It was an incredible learning experience. It was a way of understanding the city. It was a way of galvanizing cultural solidarity. It was also a beautiful way of the city coming together through our history and culture as Black folks, and using performance as the draw. So, there was entertainment happening, but it was also an affirmation of culture.

Roane: How do you think these programs affected the city?

Mercer: For us as kids, we were getting training from professional artists. We were being celebrated as working artists because the city government was paying us.

That experience, in connection with growing up in the GoGo community—watching management, knowing the inside of the groups, and eventually traveling with the groups, working as a dancer and choreographer for the horn section of EU sometimes as well, but mostly just being in the audience experiencing the culture—informs what I now practice and believe about performance and theatre and theatre’s potential in building community.

Roane: How has the culture of GoGo shaped your playwriting praxis?

Mercer: I love that live element. I think it’s most powerful, and I feel like there’s room for GoGo to grow in that respect. I discovered the connection to GoGo as a theatre practitioner in different ways. Sometimes when you’re in the creative process you are not really thinking about the immediate genealogy of your inspiration. It comes later, as you are revising.

GoGo became central to two of my plays on an intuitive level first, because the culture is so crucial to who I am that it emerged without trying. Eventually I understood what was happening and it became even more intentional. In my work, the role of the lead talker is really important. The conductor or griot of the show in two of my plays—Gypsy & The Bully Door and Gutta Beautiful—is inspired by the lead talker in GoGo.

I’m really building off of that, especially in Gypsy & The Bully Door. The character The Mayor was really inspired by Chuck Brown and the way that he interacted with the crowd at the GoGo. In Gypsy & The Bully Door, the Mayor guides us through song as the lead talker. He’s singing these bluesy songs that merge with that percussive GoGo sound, and we fuse Reggae and other Black music forms into that, which is a big aspect of what GoGo does. It samples, improvises, riffs on an original, absorbs it, and reinvents a sound that becomes a communal expression through the performance. We do that in the play as well. The Mayor also breaks the “fourth wall,” speaking directly to the audience and engaging the audience in call and response at moments.

That “lead talker” character is named the Mayor because, to me, Chuck Brown is our eternal mayor, our cultural guide, a conductor for us in a city. We don’t have an actual vote in Congress, so the cultural autonomy of GoGo, and Chuck as our pioneer, our Godfather, becomes our mayor in ways that no politically elected leader can. Because the play challenges state power with people power, constructing a character rooted in our city’s cultural brilliance is meaningful.

Roane: How is your engagement with the audience in your work and through your work influenced by GoGo?

Mercer: As a theatre maker who grew up in a music culture where audience is absolutely key, I see my audience as inextricable from the performance. GoGo is shaped by the audience. It’s not just about the band. People don’t just sit and watch a GoGo happen. The people make it happen—the call and response, the flow of the performance—it’s stops and starts, how the “lead talker” engages with the crowd. There’s nothing you can do without the audience. I miss that kind of grassroots interaction. I miss that as a theatre practitioner. So, I call on that in my work.

In my work, characters are often talking to, or moving in and out of, the audience, and it’s written into the script. I want the audience to be a part of the show in some way and I’m always trying to find ways to make that happen.

As a Black woman artist, I’m already confronting racism and sexism and its impact on my access, my opportunities. It’s a lot of pressure. You can spend far too much time asking, “Am I supposed to care about who’s listening or am I just supposed to go from the gut? And who am I really speaking to? The possible funder or company, or the people whose lives I encounter, those who inspire me daily?”

I choose to go from the gut because, as a writer, I think that’s what it’s about. That’s what being in the pocket in the GoGo is about, too. It’s a way of seeing, knowing, being. It’s a way of feeling, a sensory connection with depth. Everyone feels it when that pocket is locked, because we’re in it together. I strive to reach that pocket with the audience. I get that it’s an ambitious goal, especially in theatre, because I have to make a rhythm out of dialogue, character movement and stillness, light and darkness, silence and sound. Discovering the pocket in theatre and rocking it, riding it out, inviting the audience in and asking them to help sustain that, is a huge endeavor. But it’s worth it.

Comments on “On Performance and Black Theatre: An Interview with Playwright Nina Angela Mercer”