Byrd: What inspired you to write A Faithful Account of the Race? How does the title reflect the major argument and themes of the book?

Hall: My first book was an outgrowth of my training at Morgan State University and subsequent work at Wisconsin and Ohio State. As an undergraduate, I had the good fortune of working with Rosalyn Terborg-Penn. Penn emphasized the importance of doing deep archival research and asking penetrating questions of primary sources. She highlighted the centrality of black women in the historical record . . . Benjamin Quarles loomed large as an example of an engaged historian. I would talk with him on Wednesdays in his office in Soper Library. He was an active presence at all events in the History Department. His emphasis on recovery work and situating the black experience in the larger context of American history definitely influenced my method . . .

My senior honors thesis [on the thought of Martin Delany and David Walker] led naturally to my graduate work at Wisconsin. There [Brenda Gayle] Plummer pointed me towards a deeply transnational and international vision of African American history. She also deepened my understanding and appreciation of theory. Here, I turned my attention to Carter Woodson’s efforts to build the Association for the Study of Negro Life and History. . . At Ohio State, I extended my engagement with black internationalism and intellectual history. I extended my knowledge of Africa and the African Diaspora. All of these engagements helped me to think more critically about the intellectual, gender, and transnational implications of my work. Working with Stephanie Shaw highlighted the importance of gender and the scholarly craft . . .

Byrd: Can you tell us about the key characteristics of the earliest history texts produced by black writers?

Hall: Yes, Carter G. Woodson founded the Association for the Study of Negro Life and History in 1915, but one hundred years before, African Americans were writing their history. Black historical writing in the nineteenth century assumed different forms and relied on different sources of authority. Unlike the twentieth century where scholarship appears in monograph form, it was common for historical work [to appear] in speeches, newspapers, tracts, record books, essays, universal histories and narrative histories. Whereas in the twentieth century, science and objectivity were viewed as the standards, history in the nineteenth century relied on different forms of authority, namely the Bible and Classicism . . .

Many writers subscribed to the idea of biblical inerrancy, the notion that the Bible was an infallible document. The Bible also served as an indispensable source for knowledge of ancient history. Classicism, the veneration of classical antiquity (the history and culture of Greece and Rome) provided a framework for African American writers to extend the history of black people back to the origins of humankind, thus transcending the attempt to limit black origins to the advent of slavery in the Western world. More important, these historians accentuated the importance of black humanity and history as a humanistic endeavor. Tethered to these ideas was the framework of universal history, the nineteenth century term for World History. 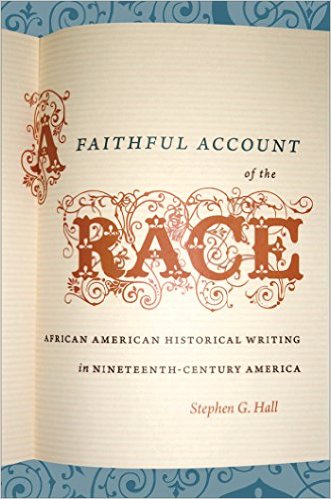 Byrd: On that note, your work highlights the central place of Africa and Haiti in African American historical writings of the nineteenth century. Why were these sites so important to intellectuals including William Wells Brown and how did they represent them?

Hall: Africa and Haiti played significant roles in black historical thinking because both sites were distorted in the nineteenth century historical record. Africa was increasingly characterized as the dark continent and viewed in various constructions as a site for the extraction of human capital, as a site for natural resources and extractive economy under colonial rule. [For black writers], establishing Africa’s critical connection to the ancient past and the Bible were essential in linking black history to the advent of world and human civilization. This was not only true in the ancient past but in the eighteenth and nineteenth centuries. William Wells Brown offered detailed descriptions of Africa’s centrality to the nineteenth century by accentuating its rich social, cultural, political and religious traditions.

Haiti also figured prominently in these histories. Black writers were justifiably proud of the Haitian Revolution. As the nation lunged toward the Civil War, black writers seized upon the Haitian Revolution as a tool to deflate the stereotypical presentation of black incapacity for freedom embedded in “The Horrors of Saint Dominque.” Instead they presented Haitians as the legitimate heirs to the spirit of what historian Eric Hobsbawn has termed “the Age of Revolution.”

Byrd: Black women figure prominently in your research, too. What do the writings of women like Anna Julia Cooper Demonstrate about black historical writing, particularly after Reconstruction?

Hall: From its inception, Black women have played a central role in the development of African American History. Their presence and vision has done more to shape the contours of the history than any other factor . . . Women such as Maria Stewart, Ann Plato and Francis Harper used essays and public speeches to frame understandings of the black past. They tangibly connected the black present to a past which extended back to the origins of humankind. They centralized issues of gender and race in their private and public pronouncements.

In the postbellum period, black women such as Pauline Hopkins, Leila Amos Pendleton, Anna Julia Cooper, Fannie Barrier Williams, and Margaret Murray Washington used their scholarship and advocacy to shape the Negro History Movement. They used their positions in primary and secondary schools, colleges and in uplift, social welfare and civil rights organizations to champion the importance of historical knowledge and collecting and preserving the past. Their scholarship not only shapes our understanding of women’s roles in black history but raises a wide range of far reaching questions about the scope and intent of history. Both Pauline Hopkins and Anna Julia Cooper understood and highlighted the relationships between Jim Crow and global systems of oppression such as colonization and imperialism and their impacts on people of color. They first envisioned the contours of black globalism. Leila Amos Pendleton used her position in the segregated Washington, D.C. schools to promote the study of African American History. Margaret Murray Washington, in addition to her work with the black club woman’s movement, also taught courses at Tuskegee and promoted global understanding through co-founding the International Council of Women of the Darker Races.

Byrd: Your book concludes with the professionalization of African American History. Carter G. Woodson was, of course, a key figure in that process. Could you elaborate on Woodson’s efforts to, among other things, found the Association for the Study of Negro Life and History (ASNLH)?

Hall: The drive to professionalize black history is an outgrowth of the Negro History Movement of the nineteenth century . . . Black historical and literary societies such as the American Negro Academy and the Negro Society for Historical Research served as repositories for occasional papers and the artifacts of the black past. The ASNLH was an outgrowth of communal interest in black history stretching back to the 19th century. The organization was formed in Chicago at a local YMCA branch. Moreover, the ASNLH’s founding board was made up of a wide cross section of community members. . . From the outset, the ASNLH was a communal effort. Woodson relied on the lay public for subscriptions to the Journal of Negro History (JNH), membership, contributions to the research fund, and historical material, especially family histories. Aware of the dearth of Black PhD’s in History, Woodson understood that the black historical project must always be grounded both in academic and communal spaces. This thinking informed the “Notes” section in the JNH, which include important primary historical material drawn from the larger community. . .-

Moreover, he did not neglect reaching out to the majoritarian community for assistance in promoting the black past. [Woodson] also solicited the assistance of white philanthropists such as Julius Rosenwald and J.G Phelps-Stokes. He also installed the sociologist Robert Park as President of the ASNLH in 1917. By 1920, Woodson’s appeals to the community and the broader academic and philanthropic communities resulted in a sustaining grant from the Carnegie Foundation secured with the help of J. Franklin Jameson, first President of the American Historical Association (AHA) and head of the Carnegie Institute.

Hall: The state of the field is vibrant. Scholars are engaged in engaging explorations of race, class, gender and difference. We have virtual explosions in the work on socio-cultural phenomena and theory. The work on transnationalism and black internationalism is reframing our perceptions of borders and boundaries and helping us to reconfigure the world in truly inclusive ways. Nineteenth century historians pointed the way forward by laying the groundwork for our current historical enterprise. Their sense of communal purpose, deeply humanistic understanding of history and complex engagement with the intellectual paradigms and social realities of their time are models for our current work.

The importance of maintaining vibrant intellectual institutions in the black community is more important now than ever. Linking our intellectual endeavors to the lived realities and the needs of everyday people is our calling. Raising our voices to protest social injustice and affirming the dignity of black lives, which, without question, must matter. Using history as a tool to celebrate the diversity in our communities regarding race, class, gender and sexual orientation is our unique responsibility. Our challenge is to build on the foundations provided by Woodson and the countless named and unnamed individuals in communities of color and conscience who understood the importance of history to teach, uplift and sustain in moments of uncertainty and possibility. We bear a unique responsibility to all the scholars, teachers, street speakers and the ordinary men and women who preceded us, whose sacrifice and determination to preserve the past animated their lives and very existence. Indeed, if we are true to Woodson’s sense of history as a shared communal endeavor, we will build independent intellectual and cultural institutions to affirm our humanity. I applaud the vision of our young historians whose work in AAIHS, #BlkTwitterstorians and countless other forums preventing African Americans and African American history “from becoming a negligible factor in the history of the world.”