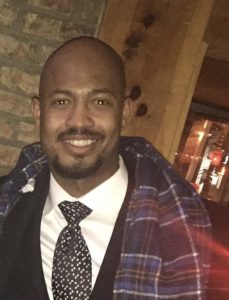 Today we’re featuring a guest post by Robert Bland, a doctoral candidate in the Department of History at the University of Maryland. His research interests include postbellum African American history, the black public sphere, and the roles of place and space in black political thought. This summer, he will defend a dissertation titled “Requiem for Reconstruction: The South Carolina Lowcountry and Representations of Race and Citizenship, 1880-1980,” which explores the many afterlives of the Reconstruction era in American and African American memory. Starting this fall, he will be a Visiting Assistant Professor in the Department of History at the University of Pittsburgh. Follow Robert on Twitter at @Rob_Bland

The recent death of Muhammad Ali shocked and saddened everyone. Largely remembered for his lyrical boxing style, outspoken opposition to the Vietnam War, and solidarity with black and brown peoples across the globe, Ali also played a crucial role in shaping American historical memory of the Reconstruction era. Cast as the protagonist in the 1979 television movie Freedom Road, Ali’s involvement not only ensured that the long-awaited film would finally go into production but also meant that for the first time on American television, Reconstruction would be portrayed in a positive manner. With the acclaim of ABC’s 1977 mini-series Roots, NBC rushed to acquire its own historical miniseries. The network bought the rights to Freedom Road, hoping that the groundswell of popular interest in African American history, combined with the inclusion of one of the most popular African American celebrities of the 1970s, would guarantee that their own historical miniseries would garner the same critical and commercial success as Roots.

While Freedom Road failed to duplicate the achievements of Roots, in large part because the nation still lacked a clear cinematic vocabulary to process and understand Reconstruction, the film still stands as the only cinematic representation of Reconstruction that embraced the radically democratic efforts of the era’s black legislators. By casting Ali as one such black legislator, Freedom Road drew an explicit parallel between the black freedom struggle of the post-World War II period and the fight black Americans waged at the federal, state, and local level to build a new world after emancipation. 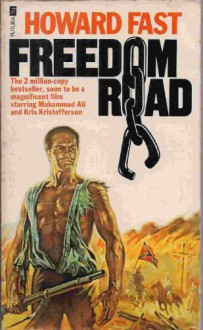 The film, Freedom Road, was inspired by Howard Fast’s 1944 best-selling novel of the same title. Once a member of the Communist Party of the United States (CPUSA), Fast interpreted the Reconstruction era through the lens of W. E. B. Du Bois’ Black Reconstruction. In the foreword to the 1952 edition of Freedom Road, Du Bois commended Fast for taking on the much maligned but critically important period of American history. “His story is fiction, but his basic historical accuracy is indisputable,” Du Bois explained.1

Fast’s Freedom Road had been optioned by Hollywood studios several times throughout the 1940s and 1950s but never went into production. Gideon Jackson, the story’s protagonist, was initially intended for the legendary actor and activist Paul Robeson. While it is clear that a project that featured both a blacklisted white writer and a blacklisted black actor at the height of the House of Un-American Activities Committee investigations could not have happened, the creation of a Freedom Road movie also faced resistance from a white dominated American film industry. “In those years, you didn’t fly in the face of the Ku Klux Klan (KKK),” Fast remarked. “You simply couldn’t make a film with blacks as leading, straightforward characters. I was told they would never let it play in the South.”2

The foundation of American film began with D. W. Griffith’s Birth of Nation, an ode to the KKK’s “redemption” of the South. The highest earning film of the first half of the twentieth century was Gone With the Wind, which painted Reconstruction as a “tragic era” and waxed nostalgically for the world of the antebellum plantation. A film in which a Reconstruction era black legislator challenged both the KKK and the white elite establishment struck a blow at the founding myth of the “Solid South.” It also challenged the cinematic vocabulary that both average viewers and film critics would have recognized and depended on to process Hollywood stories of the American past.3

By the 1970s, however, the landscape of American film had begun to shift. The black freedom struggle took on a more pronounced cultural dimension in the 1970s. Calls for Black Power, led to growing demands that the television and film industries begin telling stories of the black past. The most well known example of this shift was the television adaptation of Alex Haley’s 1976 book Roots: The Saga of an American Family. Airing for eight consecutive nights in 1977 on ABC, Roots was viewed by an estimated 140 million households and received 37 Emmy Award nominations. In 1979, an estimated 110 million viewers tuned in to Roots: The Next Generation.4

In 1973, four years before Roots began airing on ABC, Freedom Road was acquired by another production company and Howard Fast was again working on a script. Hoping to capture the newfound enthusiasm for black history in popular culture, Freedom Road was given a budget of 4 million dollars.5 When Roots achieved its critical and commercial success in 1977, NBC executives rushed to acquire the rights to the Freedom Road. The final budget for the film was increased to 7.5 million dollars, which was larger than the production budget for Roots. The increase was in large part because NBC was able to secure Muhammad Ali as the protagonist in the film. “Ali was the essence of the deal,” recalled Zev Braun, the movie’s producer. “NBC wouldn’t have made the picture without him.”6

Like the novel, the televised version of Freedom Road emphasized the lost democratic promise of the Reconstruction era. Directed by Czechoslovakian filmmaker Jan Kadar, Freedom Road follows the journey of Ali’s Gideon Jackson as the character tries to shape the terrain of black freedom following the destruction of slavery. In showing Ali’s Jackson journey from being a Union soldier, a participant in South Carolina’s 1868 Constitutional Convention, a state legislator, and, US Senator, Freedom Road placed the Popular Front radicalism of W. E. B. Du Bois and Howard Fast in direct conversation with the Third World solidarity espoused by Muhammad Ali. Whereas Fast and Du Bois viewed Reconstruction as a rare moment when blacks and whites in the postbellum South recognized their shared economic interests and could have built biracial working class movement that mirrored the CPUSA’s organizing campaigns in the interwar South, Ali saw Jackson as an analogue to his own struggle against imperialism and white supremacy during the sixties. “Gideon Jackson is a mythical character, but he’s typical of the time,” Ali remarked. “He’s not afraid; he stood up against all the structures like I did with the draft board and by becoming a Muslim. And he’s got an idea for freedom and justice for all people. . . he’s the kind of man I would’ve been if I was living then.”7

Throughout the film, the protagonist fights for the rights of both freedpeople and poor whites, and leads a biracial effort to obtain land. Emphasizing the possibility of political coalition between white tenant farmers and black sharecroppers, Freedom Road as a film offered the most sustained cinematic critique of D. W. Griffin’s Birth of Nation in American film history. Like Fast’s book, Kadar’s film inverted the narrative of Birth of a Nation and cast the KKK and the white bourbon elites as villains while portraying the black politicians and the freedpeople as the heroes. In one early scene in the movie, Jackson, the protagonist, makes the case for land redistribution in front of the South Carolina General Assembly–to the pleasure of the freedpeople and poor whites in the audience.

While Ali’s performance in Freedom Road received lukewarm response from television critics, many recognized that the story of Reconstruction was incredibly important and would never have been told without the former heavyweight champion’s involvement. The Lewiston Evening Journal’s TV critic found Ali’s performance lacking but saw the film as making a crucial point about Black Power in American history: “To the show’s credit, there’s more than lynchings and cross-burnings; there is the interesting view that Reconstruction was a renaissance for Southern blacks.”8 John J. Connor of the New York Times considered Ali’s performance “stilted, lifeless, [and] unconvincing” but considered any criticism that solely focused on Ali’s acting limitations as missing the forest for the trees. He observed, “[T]here is something admirable about Muhammad Ali’s dedication to this project. There is no doubt that he is committed to having the story told. . . without his participation, the production may never have been realized at all.9 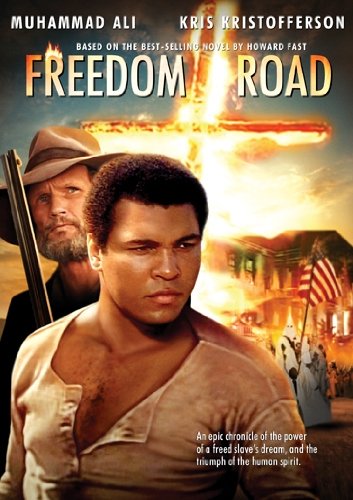 Finishing 33rd and 55th in Nielsen ratings over the course of the two nights it aired on NBC, Freedom Road failed to match the commercial success of Roots. While a number of films about the experience of black people during slavery have been made since Roots, not a single movie has been made about Reconstruction since Freedom Road. Even during the movie’s initial run, the difficulty of selling the story of what the United States could have been demanded a recognition of the ongoing trauma over the ongoing struggles to enforce civil rights law. The NBC affiliate in Boston cancelled Freedom Road, claiming that it could have further exacerbated the violence brought on by the court-mandated school busings.10 Freedom Road’s depiction of “unusually graphic incidents of racial violence,” especially against black children, unsettled both black and white leaders who likely saw the film as a reminder that the hard fought gains of the Civil Rights Movement, much like the gains of Reconstruction, could be erased by extralegal violence.11

Although Freedom Road is a footnote in Muhammad Ali’s prolific biography, overlooking the film erases an important historical development and step toward fully reckoning with the legacy of Reconstruction. Well into the twenty-first century, there are still no museums or publicly funded memorials to the legacy of the black legislators who took the first step in making the United States a true democracy. Having repeatedly challenged the forces of white supremacy in his own life, Ali was keenly aware of the importance of Reconstruction’s legacy and how the struggles for black freedom of 1960s and 1970s mirrored the earlier struggle of freedpeople during the 1860s and 1870s. Without Ali’s star power, Freedom Road would likely have never turned into a film and that would render our public memory of Reconstruction all the more miniscule.

Comments on “Muhammad Ali, Freedom Road, and the Legacy of Reconstruction”