This post is part of a new and recurring blog series I am editing, which announces the publication of selected new works in African American and African Diaspora History. A few weeks ago Rutgers University Press published Militant Visions: Black Soldiers, Internationalism, and the Transformation of American Cinema. 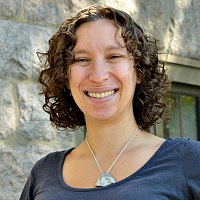 The author of Militant Visions is Elizabeth Reich. Professor Reich is an assistant professor of film studies at Connecticut College in New London. She is currently at work on two new projects: co-editing a book collection on Afrofuturism, Justice In Time: Critical Afrofuturism and Black Freedom Struggles, and another monograph on global cinema, temporality and reparations, tentatively titled Reparative Time.

This fall, Professor Reich is teaching her second First-Year Seminar in Afrofuturism and organizing a day-long symposium on Afrofuturism and Social Justice. This past spring she also coordinated the Film Studies Program’s 2016 Stark Residency.

In 2015, Reich co-edited a special issue of Film Criticism, titled “New Approaches to Cinematic Identification,” which brought together works on identification and film spectatorship. Reich’s writings have appeared in Screen, African American Review, Film Criticism and Women and Performance, and she has a chapter forthcoming in Black Cinema Aesthetics, edited by Michael Gillespi and Akil Huston. She also serves on the editorial boards of Criticism and Film Criticism. Her feature-length documentaries include “Milton and Charlotte: A Baliwood Love Story” and “very Queer kids.” 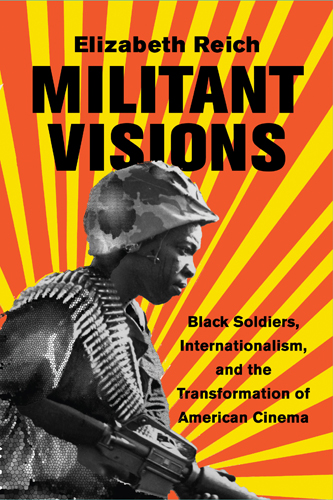 Militant Visions examines how, from the 1940s to the 1970s, the cinematic figure of the black soldier helped change the ways American moviegoers saw black men, for the first time presenting African Americans as vital and integrated members of the nation. In the process, Elizabeth Reich reveals how the image of the proud and powerful African American serviceman was crafted by an unexpected alliance of government propagandists, civil rights activists, and black filmmakers. Contextualizing the figure in a genealogy of black radicalism and internationalism, Reich shows the evolving images of black soldiers to be inherently transnational ones, shaped by the displacements of diaspora, Third World revolutionary philosophy, and a legacy of black artistry and performance.

Offering a nuanced reading of a figure that was simultaneously conservative and radical, Reich considers how the cinematic black soldier lent a human face to ongoing debates about racial integration, black internationalism, and American militarism. Militant Visions thus not only presents a new history of how American cinema represented race, but also demonstrates how film images helped to make history, shaping the progress of the civil rights movement itself.

“In this revelatory revisionist history of twentieth-century American film, Reich demonstrates that the figure of the black soldier has served as a lightning rod for a welter of national anxieties around race, masculinity, and allegiance.”
—Brent Hayes Edwards, author of The Practice of Diaspora
***

Ibram Kendi: What are the principal findings or arguments of Militant Visions? What do you hope readers take away from reading it?

Elizabeth Reich: Militant Visions traces the transformation of racial representation and politics in American cinema over the thirty years of the long Civil Rights Movement by focusing on the industry’s use of an iconic but understudied figure: the black soldier. Following this filmic figure alongside the shifting political imperatives of the Cold War and black freedom struggles, I argue that the soldier’s transnationalism and his powerful black masculinity, though often shaped in service of conservative government agendas, at once reflected the militant internationalism of the interwar years and supported the development of post-WWII black radicalism.

Framed in films by far flung colonial settings and domestic race struggles alike, this soldier-figure served both as the patriotic representative of an imperialist nation struggling with integration and the unlikely prototype for the radical, reparations-demanding renegades of the Blaxploitation cycle. And, in so doing, the black soldier became central to the development of a new practice of film spectatorship, one that drew upon and transformed previous strategies of seeing race and changed along with the images and meanings of the soldier itself.

Bringing together the black soldier films of three decades and three different film industries, Militant Visions challenges established stories about the role of race in Hollywood and offers a new history of American cinema during the thirty years after America’s entry into WWII. I hope that readers will come to understand that black soldiers–as they were and even as they exist today–are products of the vast and competing historical forces outside their control, including the needs of an imperialistic country to represent itself as diverse and equitable to allies of color abroad; the U.S.’s efforts to effect peaceful and unequal integration of its civil society; and black Americans’ desires for full social and political inclusion.

I hope readers will also learn the ways in which the figure of the black soldier has been fundamental to black efforts both to assimilate and to resist America’s racist and imperialist projects — and that, for the last century, black America has been heroic and radically unacknowledged in its collaborative work with a global world. Finally, I hope readers will come away from the book with a sense that the cinema is an important and productive site for the study of history and racial politics and that its stories can tell us broader stories about the world as a whole.