On September 16, 1984, exactly one week after Louise Thompson Patterson turned eighty-three years old, an extravaganza was held in her honor. It was a birthday celebration, a commemoration of her tireless activism, and a farewell party, for “after two stints in New York that amounted to forty-seven tumultuous yet productive years touching every progressive political cause… [she was] depart[ing] from the New York scene” (211). In a speech entitled, “In the Great Tradition of Black Womanhood,” friend and author John O. Killens paid tribute to Patterson’s life as an educator, organizer, intellectual, and paragon of political activism. Keith Gilyard’s illuminating biography, Louise Thompson Patterson: A Life of Struggle for Justice is, in many ways, the full elaboration of Killens’ testimonial.

One approach to retrieving and reconstructing the lives of Black radicals is the Horne biographical method, which uses individual actors to illuminate global social forces, international relations, and processes of repression that erase or distort their contributions. Reversing this analytical approach, Gilyard uses a “great (wo)man” interpretation to chronicle how global and local events, personal and political relationships, and triumphs and tribulations, impacted Patterson’s “life of struggle for justice.” The chapters, organized chronologically, elucidate how each era of activism inaugurated Patterson into a great tradition of Black womanhood grounded in “Communist-inflected advocacy for labor, radical culture, and black freedom” (145).

Consonant with recent biographies about “radical black female subjects,” including Thyra Edwards, Eslanda Robeson, Claudia Jones, and Shirley Graham Du Bois, the author’s primary thesis is that Patterson “embodied resistance to racial, economic, and gender exploitation, moving beyond theory to action” (2). He argues that the lifelong struggle of this self-proclaimed “rebel” for “justice, humanism, and community” was simultaneously an interrogation of “What Makes One an American Negro” (3-4). Rather than imposing a definition of Black womanhood that might omit or downplay some aspect of Patterson’s praxis, Gilyard carefully explicates her manifold contributions to a number of Black intellectual, political, and cultural traditions including the Harlem Renaissance, Black Marxism, Black left feminism, Popular Front activism, and Black Power.

The first three chapters describe and analyze the development of Patterson’s racial consciousness through multiple childhood experiences of racism and the formal politicizing of that consciousness when, as an undergraduate at the University of California, Berkeley, she attended a “mesmerizing” lecture given by W. E. B. Du Bois on March 3, 1923. In the third chapter, Gilyard uses Patterson’s own reflections regarding her activism trajectory. Here the author is able to offer insight into the cultivation of her class consciousness, specifically through the dialectic between the paternalism and hierarchical structure of places like Hampton Institute and the National Urban League on the one hand and exposure to Marxism and the conditions of sharecroppers in the South on the other.

The next several chapters highlight Patterson’s dizzying array of activism, primarily in Harlem and Chicago, but also in the Soviet Union (1932) and Spain (1937). In Harlem, at the onset of the Great Depression, she worked with the International Labor Defense and the Civil Rights Congress on a number of anti-Jim Crow and anti-repression cases; established enduring relationships with Harlem Renaissance giants; and joined the Communist Party USA (CPUSA). Starting in 1932, she began her vigorous labor organizing and membership building for the International Worker’s Order (IWO), which ultimately demanded a move to Chicago in 1941. Back in Harlem by 1949, she labored to build and sustain radical Black organizations like the Council on African Affairs (CAA) and the Sojourners for Truth and Justice (STJ). The final two chapters explore how Patterson’s protracted engagement with political developments of the 1960s through the 1990s sustained her organizing, writing, network building, cultural criticism, and institution building. 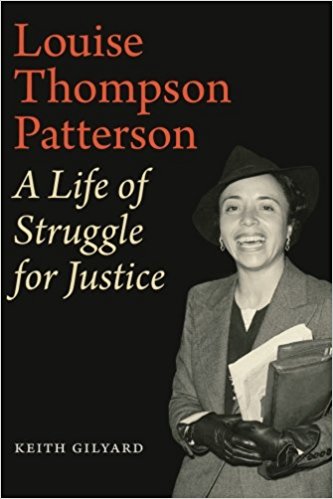 Louise Thompson Patterson: A Life of Struggle for Justice makes three important contributions to the intellectual history, political thought, and gender studies of “radical Black female subjects.” First, the mutual reinforcement of radical art(ists) and politics throughout Patterson’s life illuminates a fundamental disruption of gendered hierarchy among comrades. Second, the peripateticism of Patterson’s life and activism challenges masculinist interpretations of cosmopolitanism and travel. Finally, her life reveals a counterhegemonic version of so-called homemaking that was indispensable to radical politics from Harlem to Chicago.

Unlike texts that primarily focus on Patterson’s politics and organizing such as Sojourning for Freedom: Black Women, American Communism, and the Making of Black Left Feminism (2011) and Radicalism at the Crossroads: African American Women Activists in the Cold War (2011), Gilyard’s biography underscores that radical Black artists and cultural production were essential to her politics and worldview. To get at the importance of the relationships between Patterson and radical artists, and to show her involvement in and commitment to cultural production and institutions, Gilyard draws on an array of sources including letters, newspaper articles, edited collections, interview transcripts, and biographies. By contrast, his discussion and analysis of Patterson’s connections with figures in the CPUSA and adjacent organizations relies much more heavily on secondary sources and her unpublished memoir. Such unevenness notwithstanding, the priority given to the influence of artistic, literary, and cultural production on radical politics resonates with Carole Boyce Davies’ study of Claudia Jones and Gerald Horne’s account of Shirley Graham Du Bois.

Gilyard explains, for example, that Patterson’s relationship with visual artists Aaron and Alta Douglas encouraged her participation in the Harlem Experimental Theater, where she was introduced to countless comrades, including her lifelong friend Langston Hughes. These connections made her a regular on the Harlem cultural scene where she met important political radicals like Cyril Briggs and Harry Haywood who encouraged her study of Marxism, her involvement in the CPUSA, and her trip to the Soviet Union. Moreover, Patterson’s support of and leadership in several cultural institutions, including the Harlem Suitcase Theater (conceptualized in her apartment in 1931), Chicago’s South Side Community Arts Center, and the Afro-American Committee for Gifts of Art and Literature to Ghana, expose gender relationships that appear much more egalitarian than in other organizations. In Chicago, for instance, Patterson and sculptor Augusta Savage formed the Vanguard Club, which sponsored political forums, debates, lectures, and art shows. Radical men and women actively participated in these events, and none balked at the leadership of these Black women.

The peripatetic nature of Patterson’s life challenges masculinist specifications of Black mobility, African diasporic “routes,” and radical Black internationalism such as those presented in The Black Atlantic (1993) and Black Marxism: The Making of the Black Radical Tradition (1983). Relying primarily on Patterson’s own words in her unpublished memoir and in several interviews with persons including Margaret Wilkerson, Linda Burnham, and Carole Yates, Gilyard documents Patterson’s travels to countless U.S. urban centers to organize, fundraise, and agitate on behalf of numerous organizations. She crisscrossed the United States and trekked to Europe to globalize cases of antiblackness and repression (Scottsboro in 1931, Rosa Lee Ingram in 1947, Angela Davis in 1970) that demanded international attention to procure a just resolution. Moreover, her journey to Spain in 1937 nurtured key networks and connections. Her travels to the socialist world across three decades allowed her to closely observe and meticulously document indicators such as level of industrialization, increasing literacy, and the improvement of the conditions of women that helped her to envision a socialist future for Blacks in the United States. As Gilyard explains in the first two chapters, Patterson’s circuitous journey from Chicago, Illinois, to the Bay Area of California between 1901 and 1925 primed her for a life of travel in search of justice.

Patterson’s rigorous travel schedule was complimented by a home life that defied traditional gender norms. Her version of homemaking meant turning her living quarters—especially 409 Edgecombe Avenue in Harlem—into a place of political discussion, cultural creativity, and fortification against repression. In the 1930s, her apartment was the founding place for several leftist organizations like the Soviet Friendship Society, a site of radicalization for young transplants like Ralph Ellison, a source of creativity for artists like Langston Hughes, and a space of temporary respite for countless militants like Thyra Edwards. Patterson’s home was also a source of mutual comradeship and collaboration as exemplified in her unbreakable bond with the young radical poet and actress Beah Richards. Together they “were central to the formation of the initiating committee” of STJ, and “[w]ith Louise pacing the floor for hours and Richards fixing sentences onto the page, the dynamic duo produced ‘A Call to Negro Women,’” a document that ultimately brought together a cadre of militant women from across the nation (171). Gilyard’s text thus conveys that homemaking was redefined by “radical Black female subjects” as a process of community-oriented and collaborative place-making.

Keith Gilyard offers deep and invaluable insight into the life of one of the most important Black leftists of the twentieth century. The text’s strengths lie in its detailed description, its balanced coverage of the personal and political aspects of her life, and its generous use of her own voice. Its major weakness is that it is often lacking in careful analysis of the social and political contexts that frame Patterson’s activism. One example of this shortcoming is that, despite brief mentions of the Great Depression, no larger discussion is provided about its direct impact on important phenomena like the increased appeal of socialism and communism or labor radicalism. The collapse of monopoly capitalism and its intensification of Black poverty and structural lack made Black people of all classes more amenable to an economic alternative. There was also an increase in union militancy and demands on the government given exorbitant unemployment and deteriorated material conditions during these years. Likewise, the beginning of chapter ten mentions the Red Scare and touches upon individuals close to Patterson who were subjected to persecution under McCarthyism. However, these events are not grounded in a broader explication of the Cold War, post-World War II demobilization and economic restructuring, or shifting U.S. foreign policy concerns. Such contextualization and framing would give much more insight into the structural conditions that affected Patterson’s political choices. Nonetheless, readers interested in the lived experiences, intellectual history, and political thought of leftist Black women will find great value in this book.

Charisse Burden-Stelly is an Assistant Professor of Africana Studies and Political Science at Carleton College. She received a PhD in African Diaspora Studies in 2016 from the University of California, Berkeley. Her areas of specialization include race and political economy, Black political theory, antiblackness and anti-radicalism, and Black radical thought.