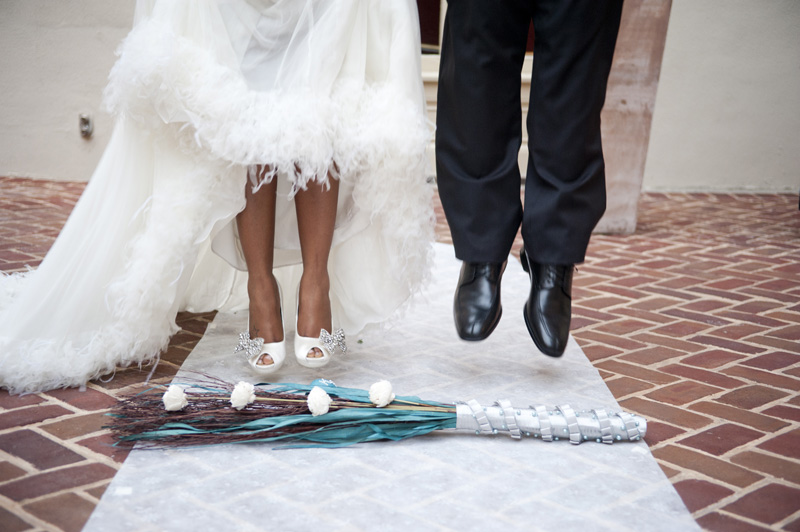 Many people in the 21st century became familiar with jumping the broom through the 1977 miniseries Roots in a wedding scene when the characters Kunta Kinte and Bell jumped over a broomstick in front of their plantation community. This visual depiction was a watershed moment in formulating the contemporary Black wedding. As Erica L. Ball and Kellie Carter Jackson argue in Reconsidering Roots, Alex Haley’s story “personalized and dramatized” Black history, making Roots “something deeply personal, long awaited, and profoundly special.” Forgotten customs were soon resurrected and embraced by a descendant community that yearned for an authentic representation of their ancestral heritage.

Due to its preeminence in modern African American Heritage Weddings, the custom’s origins remain a subject of contention. Some hope it is a relic of West African heritage, signifying a way for practitioners to reconnect with their ancestors beyond slavery. Others suspect it was a foreign ritual introduced by slave owners who, as a form of mockery, forced their slaves to perform it. In viewing formerly enslaved peoples’ responses collectively, it is apparent there is no single reason why Black people jumped the matrimonial broomstick in the nineteenth century. The decision to perform it or reject it largely depended on their situations.

Perhaps the main problem in deciphering how the enslaved felt about the broomstick wedding lies in the reality that enslaved people were not a homogenous unit. Though Black people throughout the South certainly shared in certain cultural patterns birthed through bondage and resistance, each plantation was its own community that held its own set of unique values and traditions. It is through this paradigm that jumping the broom is best understood.

But what of its origins? Online forums suggest this issue remains the subject of some debate, but recent scholarship persuasively places the broomstick wedding in western Europe, primarily the British Isles. Folklorists in the early twentieth century found that memories of the custom survived in the oral histories of Celtic communities in Wales alongside similar traditions used by British gypsies. In one Welsh community, a “birch besom” was placed over the threshold of the engaged couple’s doorway. The broom typically had a slight slant with the bushy end facing downward. Within the view of witnesses and a village elder, the groom “jumped over it first into the house, and afterwards the young woman in the same way.” If either of the two touched the broom while crossing over it, the marriage was considered invalid.1

The British gypsies used the same concept of broom jumping, but with slight alterations: “The besom was held by the father of the bridegroom or bride, and first the young man jumped over it, and then the young woman, whereupon the official would make some such remark as ‘Now, you are married.’”2 As different groups throughout Britain acquired the custom they tailored it to their own needs and cultural worldviews. Similar adjustments likely occurred when the tradition traversed the Atlantic and was subsequently introduced to enslaved people of African descent.

Like its British predecessor, the custom’s ceremonial format took many forms in the U.S. South and its ritual functions were determined by the individuals who used it. Documents from the Works Progress Administration (WPA) reveal that many Black people born into slavery remembered the ritual and its importance to them or their elders. The “WPA narratives,” as they are known, contain thousands of interviews with African Americans born before slavery’s end in 1865. Collectively, they reveal dynamic cultural patterns unique to southern slaves, including their perspectives on family, religion, food, and music, among others. Broomstick marriages are referenced with some frequency, but there was no single way to perform the custom.

It was common on some Georgia plantations to jump over the broomstick backwards, instead of forwards.3 The reasons why these areas in Georgia hold similar formats are not divulged, but it is possible the plantations in this area of Georgia held increased contact with one another and the enslaved communities engaged in cultural exchanges. Other ritual forms reveal definite attempts to dignify the broomstick ritual within the community. One formerly enslaved person from Tennessee recollected the following ceremony: “Dey goes in the parlor and each carry a broom…de woman puther broom front de man and he put he broom front de woman. Dey face one nother and step cross de brooms at de same time to each other and takes hold of hands and dat marry dem.” This ritual far exceeds the simpler form of simply stepping over the broom– the ceremony most often used in modern Heritage Weddings. Joining hands and crossing over as a token of each other’s love was representative of the deep bonds many slaves held in an era when familial life was turbulent.

Not everyone nostalgically remembered the broomstick wedding. Some respondents in the WPA narratives actively denied it. Josephine Ryles, enslaved in Galveston, Texas, claimed to “hear some of ‘em say somethin’ bout jumpin’ over de broom an’ bein’ married dat way, but it ain’t true. No’m, dats jus’ a story. I seen a lot of marriages, an’ dey was married regular.” Lizzie Johnson insinuated that despite the tendency of some Black people to have broomstick weddings, her own mother “really got married and didn’t jump no broomstick.” Thus, if one wanted to “really” get married, or get “married regular,” they needed to eliminate all vestiges of slavery from their lives. Though it was never fully eliminated from postbellum Black culture, jumping the broom largely fell out of favor for over one hundred years following the American Civil War.

The general misunderstanding of how and why slaves jumped the broom for marriage largely explains current socio-cultural divisions surrounding who has the right to use the custom. As larger numbers of white people publicly jump the broom, accusations of “cultural appropriation” have gained prominence. White readers typically cite the custom’s European connections, but commenters from both sides utilize a tone not especially conducive to discussion or fruitful debate. Though academic research on the broomstick wedding’s European origins has existed for over two decades, most of these publications are not widely accessible due to the difficulties in obtaining peer-reviewed journals outside the academy. Conversely, popular works espousing its supposed African origins remain widely available to interested readers.

It seems that the public consumption of history largely stems from reading secondary sources that are taken as absolute truth. Readers are neither encouraged or instructed where to find the primary evidence. Though locating the first documented instance when an enslaved couple jumped the broom proves especially difficult, references to the custom are not lacking in the historical record, especially within the testimonies of formerly enslaved people. In the forty-plus volumes of George P. Rawick’s edited collection of WPA narratives entitled, The American Slave: A Composite Autobiography, there are well over one hundred references to the broomstick wedding.

The broomstick wedding’s history is remarkably complex, as it intertwines the histories of Black and white people on both sides of the Atlantic. Consequently, its multicultural history has instigated some contention regarding its origins and who can claim it. Does any particular group “own” this custom? The historical record suggests that it is far more complicated, and in this case, it appears that we are asking the wrong question. Perhaps the broomstick wedding’s place in American cultural history needs to be reexamined through a broader lens.

Instead of arguing that one group holds a monopoly over the custom, we might consider that jumping the broom embodies the essence of American culture. Created and innovated by oppressed and ostracized groups in Europe and the United States, jumping the broom exemplifies how peoples from Europe and Africa contributed to the unique cultural developments that permeate the Americas. These traditions also exemplify how these groups created dynamic cultural expressions that thwarted the institutional forces that tried to eliminate their self-worth and creativity.

Comments on “Jumping the Broom and the American Cultural Divide”