loading...
By Ibram X. Kendi November 15, 2016 Comments Off on In Love and Struggle: A New Book on James and Grace Lee Boggs

This post is part of a blog series that announces the release of selected new works in African American History and African Diaspora Studies. In Love and Struggle: The Revolutionary Lives of James and Grace Lee Boggs was recently released by University of North Carolina Press.

The author of In Love and Struggle is Stephen M. Ward. Professor Ward is an associate professor in the Department of Afroamerican and African Studies (DAAS) and the Residential College at the University of Michigan. He teaches courses in African American history, the transformation of cities, Detroit history, and the history of Hip Hop, and he serves as the faculty director of the Semester in Detroit program. He is also the editor of Pages From a Black Radical’s Notebook: A James Boggs Reader (2011) and is a board member of the James and Grace Lee Boggs Center to Nurture Community Leadership in Detroit. 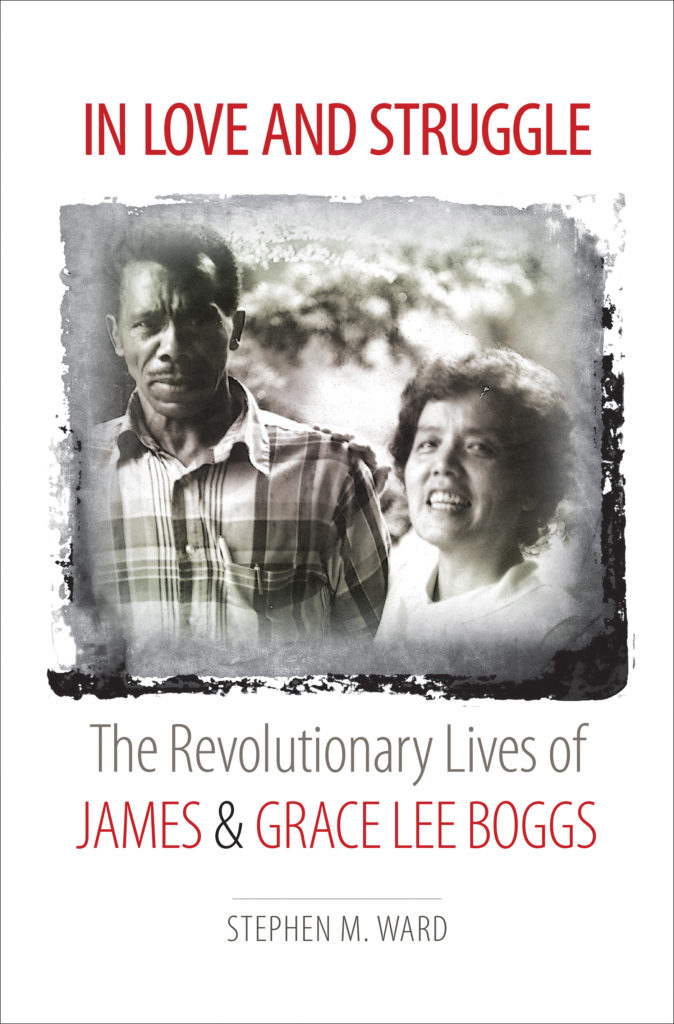 James Boggs (1919-1993) and Grace Lee Boggs (1915-2015) were two largely unsung but critically important figures in the black freedom struggle. Born and raised in Alabama, James Boggs came to Detroit during the Great Migration, becoming an automobile worker and a union activist. Grace Lee was a Chinese American scholar who studied Hegel, worked with Caribbean political theorist C. L. R. James, and moved to Detroit to work toward a new American revolution. As husband and wife, the couple was influential in the early stages of what would become the Black Power movement, laying the intellectual foundation for racial and urban struggles during one of the most active social movement periods in recent U.S. history.

Stephen Ward details both the personal and the political dimensions of the Boggses’ lives, highlighting the vital contributions these two figures made to black activist thinking. At once a dual biography of two crucial figures and a vivid portrait of Detroit as a center of activism, Ward’s book restores the Boggses, and the intellectual strain of black radicalism they shaped, to their rightful place in postwar American history.

“Stephen Ward’s highly anticipated biography of James and Grace Lee Boggs lives up to its promise, and then some. Set largely in Detroit, the center of black working-class insurgency, In Love and Struggle tells the compelling story of what happens when two of America’s most original thinkers dedicate their lives to acting in the world. Jimmy and Grace insisted on the urgency of philosophy, on constantly questioning, and on staying grounded in community. With absolute clarity and care, Ward traces the couple’s evolution toward revolution, engages the prodigious body of work they left behind, constructs a new history of U.S. radical movements, and opens a window onto an unfinished future.” —Robin D. G. Kelley, author of Freedom Dreams: The Black Radical Imagination

Ibram X. Kendi: Did you face any challenges conceiving of, researching, writing, revising,and/or publishing this book? If so, please share those challenges and how you overcame them?

Stephen M. Ward: The first and most significant challenge I faced was to develop the conceptual and narrative structure for a dual biography. I wanted to craft an analysis that would tell the individual and intersecting stories of how Grace Lee Boggs and James Boggs each arrived at what became their mutual commitment to making a revolution in the United States and how together they acted on this commitment over their four decades of shared thinking, writing, activism, and movement-building. This led me to conceptualize In Love and Struggle as a study of two distinct historical figures, the rich and enduring partnership they created, and the radical politics at the center of that partnership.

To do this, the book begins by tracing the differing backgrounds and early influences that shaped Grace Lee Boggs (born in 1915) and James “Jimmy” Boggs (born in 1919) during the formative years of their lives. The book then follows their respective intellectual and political trajectories through the 1940s and early 1950s, showing how Grace and Jimmy moved along distinct but ultimately converging paths. The final section of the book examines the development of their thinking and activism within the overlapping contexts of post-war Detroit, the specific thread of Marxist politics that initially brought Jimmy and Grace together, and the networks of black radicals they helped to forge in the larger black freedom struggle. This analysis of how they lived, organized, theorized, and struggled together reveals the ways that James and Grace Lee Boggs built a durable partnership that was at once marital, intellectual, and political. It was a genuine partnership of equals, remarkable not only for its unique pairing or for its longevity, but also for its capacity to continually generate theoretical reflection and modes of activist engagement.

The partnership ended with Jimmy’s death in 1993. But the development of their intellectual and political work continued, and this added another dimension to my challenge of conceptualizing and narrating their lives, ideas, activism, and legacy. Grace built on and extended the ideas and political practice they had forged together through her ongoing political engagement and writing over the two decades following his death. During these years she remained politically active and grew increasingly influential as a movement elder and a contemporary voice for grassroots mobilization up to her passing, at the age of 100, in 2015. In 1998, Grace published her autobiography, Living for Change, presenting its own framing of her and Jimmy’s life together. Then, with the appearance of her last book, The Next American Revolution: Sustainable Activism for the Twenty-First Century, in 2011, followed two years later by the documentary film, American Revolutionary: The Evolution of Grace Lee Boggs, there emerged an awareness and interest in Grace, and a narrative of her activism, largely independent of Jimmy. I wanted to ensure that, as I drew from the primary source material (and perspectives) emerging after Jimmy’s passing, I maintained an analytical and narrative framing of their shared history and shared legacy of revolutionary thought and action, even as she alone increasingly came to articulate and represent it.

I had the good fortune of getting to know and work with Grace during the last thirteen years of her life, though I did have the opportunity to meet Jimmy, who passed before I began this project. I was able to conduct multiple interviews and have many conversations with Grace, leading to invaluable information, insights, and perspectives informing my research and my understanding of her and Jimmy. Indeed, getting to know Grace was one of the most rewarding dimensions of this project. Of course, I did not have the same opportunity with Jimmy, and I tried to be mindful of any implications of this fact for my understanding and analysis. My challenge, then, was to engage and draw from the various sources and narratives that Grace and others articulated, but to also critically reflect upon (and not simplistically adopt) these framings as I developed the narrative arc and conceptual frame for In Love and Struggle.