Growing up, I’ve heard many definitions of the term racism, however just last year I read the best definition to date. In his critically acclaimed work, How to Be An Antiracist, Ibram X. Kendi argues that racism is a marriage of racist policies and racist ideas that produces and normalizes racial inequities. Kendi goes on to say that racism is a powerful collection of racist policies that lead to racial inequity and are substantiated by racist ideas. In Stony The Road, Henry Louis Gates Jr. proceeds to show readers how a powerful collection of racist policies instituted against Black people were substantiated by racist ideas about Black people. Stony The Road is where Gates offers readers a history of American racism in its second iteration: Jim Crow.

American racism’s first iteration was legalized enslavement of Africans and their descendants for benefit of the national economy. The racist idea that substantiated legalized enslavement was the myth of Black inferiority expressed by some of our nation’s founders like Thomas Jefferson, who said that “the Blacks… are inferior to the Whites in the endowments both of body and mind.” Following the Civil War, Reconstruction emerged as, what Gates calls, one of the most ambitious periods in American history. Here, Gates describes the imagination of what America was to be, had Reconstruction not failed, and the backlash that led to its failure— assuring that such strivings wouldn’t happen for another one hundred years.

Usually, scholars tend to focus on the racist policies that lead us to our current time. Yet Gates takes a different course in his text–spending the majority of the time examining racist ideas and how those ideas reinforced racist policies. Gates begins with Reconstruction. In chapter one, Gates tells of the gains made during Reconstruction; namely the thirteenth through fifteenth amendments and the Civil Rights Acts of 1866 and of 1875. In addition to those major gains, Gates speaks about the work of the Freedman’s Bureau, the first Black members of Congress, and the various strivings of Black people post-slavery. He also speaks of the backlash that occurred due to and after reconstruction; from the Black Codes and President Johnson rescinding General Sherman’s Special Field Order #15 to various court decisions that did not protect Black voting rights and rescinded key parts of the Ku Klux Klan Act of 1871. Next came the doctrine of separate but equal. In a battle with liberty and justice on one side and anti-Blackness on the other, the latter proved to be the victor. What both accompanied and further followed were the racist ideas to justify court decisions, legislative enactments, and executive enforcement. 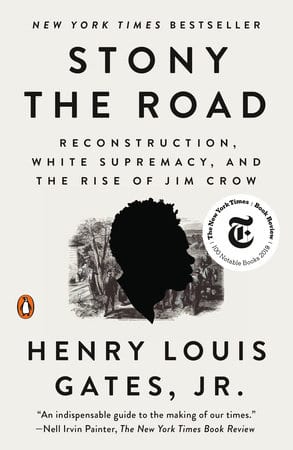 In chapters two and three, Gates details racial pseudoscience, racist literature, racist performance and visual art as the rhetoric of White Supremacy. Religion served a scientific purpose to argue monogenesis; the view that while humanity derives from one man (Adam), Black skin is punishment for Noah’s son Ham seeing Noah naked. By the 19th century, the argument was for both polygenesis, the idea that there were distinct “races” from the very beginning of creation, and phrenology, the idea that Africans had different shaped skulls from Europeans and thus their brain power was weaker. “Diseases” were discovered among Black people such as Drapetomania and Rascality. Such ideas continued after the emancipation of Black people, but they were expanded and evolved. Darwinism, Social Darwinism, and the Eugenics movement were adapted to include a narrative on race and survival of the fittest. Yet it was the Eugenics movement that kept the myth of Black inferiority a reality for many Whites. For example, Eugenicist Carl Brigham created the SAT; which has a history of racial bias against Black people.

Gates speaks of popular works that served as visualizations of racist ideas. Scholars and novelists alike worked to define the “Negro Problem” as the challenge, based on racial stereotypes, for Black people to survive in a society from under the careful eye of whites. This paternalistic rationale looked for ideas to maintain white supremacy in a world of policy change. For example, Studies in the South, published by the Atlantic Magazine, used familiar tropes to characterize Black people as lazy, strangely shaped, and distinct from white people. A Harvard paleontologist even attempted to use his content knowledge to justify racial tropes of Black inferiority. To strength the narrative of Black dependence on whites, literature was erected glorifying Black life under white control. One such character of fame was Uncle Remus, a benevolent icon of enslavement from within the Lost Cause ideological frame. Uncle Remus rejected book learning and the institution of public schools. So popular was Uncle Remus that Disney created a live action/animation of Uncle Remus in Songs of the South, which Disney recently and reluctantly shelved. One such work is A Crippled Hope where a formerly enslaved person is physically and emotionally disabled both by emancipation. Another work is Two Gentlemen of Kentucky where Peter Cotton, a formerly enslaved person, worships his former “master.” Then there is The Birth of a Nation which portrayed the Lost Cause theology in a romantic sense that beautified the violence of the Klan and the Confederate cause while painting Black people as barbaric. Birth of a nation is based on Thomas Dixon’s The Clansman: An Historical Romance of the Ku Klux Klan. Reflecting on this last work, Gates writes, “what Uncle Tom’s Cabin had been to the abolitionist movement, The Clansman was to the Lost Cause and to Jim Crow white supremacist doctrine.”

There was visual art in the form of popular advertisements that added an additional element for creating a picture of Black people in the minds of whites and Black people. Gates calls this Sambo Art, racially offensive depictions of Black people based on unfounded and false characterizations. These pieces were used not only for book illustrations but also in advertisements for popular products such as coffee, pancakes and rice. Blackface was popularized during the 19th and 20th centuries. The performance of Thomas “Daddy” Rice as Jumpin Jim Crow was inspiration for the name of legal segregation in the South. In Chapter 4, Gates speaks about how Black people continued to define themselves against the backdrop of white supremacy. W.E.C. Wright, a college professor, coined the term the “new Negro,” as opposed to the “old Negro” referenced by whites, as one who seeks political and economic opportunities; one who engages in culture and aesthetics due to their education, refinement and money. The politics of respectability were introduced, whereby middle-class Black people in the North and South attempted to show their embrace of white Victorian middle-class social and moral values; emphasizing that Black people should comport themselves in public as thoroughly white Victorian. The expectation was that Black people, through their innovativeness and ingenuity, could counter the imagery and narratives based on racism that were commonplace at the start of the 20th century. However, there were Black people later in the 20th century who defined “new Negro” in a way to say that there was a new day in America where Black people would openly challenge white people on the issue of racism and white supremacy either by fighting for civil rights internally or seeking separation or extradition back to Africa.

Gates is an accomplished academic who holds a wealth of knowledge on the subject of American history and the treatment of Black people by White Americans. Gates’ argument of how racist ideas work to justify racist policies is proven in our daily politics–the ideas and politics of the Trump Administration being a prime example. For example, Stephen Miller, who is an advisor to Donald Trump, is a white supremacist – whose view informs his policy advising, such as immigration policy. Gates details in Stony The Road how racist scholarship and literature was endorsed by presidents, specifically Warren Harding and Woodrow Wilson. Racist literature and art of any sort that helps one internalize racist ideas are dangerous to any society. In Stony The Road, Gates shows how devastating this has been to America; that we’ve reached this point in our journey as a nation is no accident. I would recommend this book to anyone, and one could persuasively argue that Stony The Road should be required reading in high school history classrooms.

Rann Miller is a PhD candidate at Rutgers and is a 21st century community learning center director for a school district in southern New Jersey. His writings on race, education, and politics were featured in The Hechinger Report, Education Week, and The Grio. Rann currently resides in southern New Jersey with his wife and three children.