This is a guest post by Adam Ewing, an Assistant Professor of African American Studies at Virginia Commonwealth University. He received his PhD in History from Harvard University in 2011. Dr. Ewing’s work focuses on the historical dynamics of power, identity, and political mobilization in the African diaspora. His first book, The Age of Garvey, examines the spread and articulation of Garveyism—the race first politics spearheaded by Jamaican activist Marcus Garvey—across the United States, the Caribbean, and Africa in the years following World War I. The book is the recipient of the 2015 Stuart L. Bernath Book Prize, awarded by the Society for Historians of American Foreign Relations. Dr. Ewing is currently working on three book projects: his second monograph, a global history of Pan-Africanism; Global Garveyism, and edited collection of essays charting the global reach and importance of Garveyism (with Ronald Stephens); and an untitled project compiling the collected writings of Robert A. Hill, the legendary scholar of the Pan-African tradition. 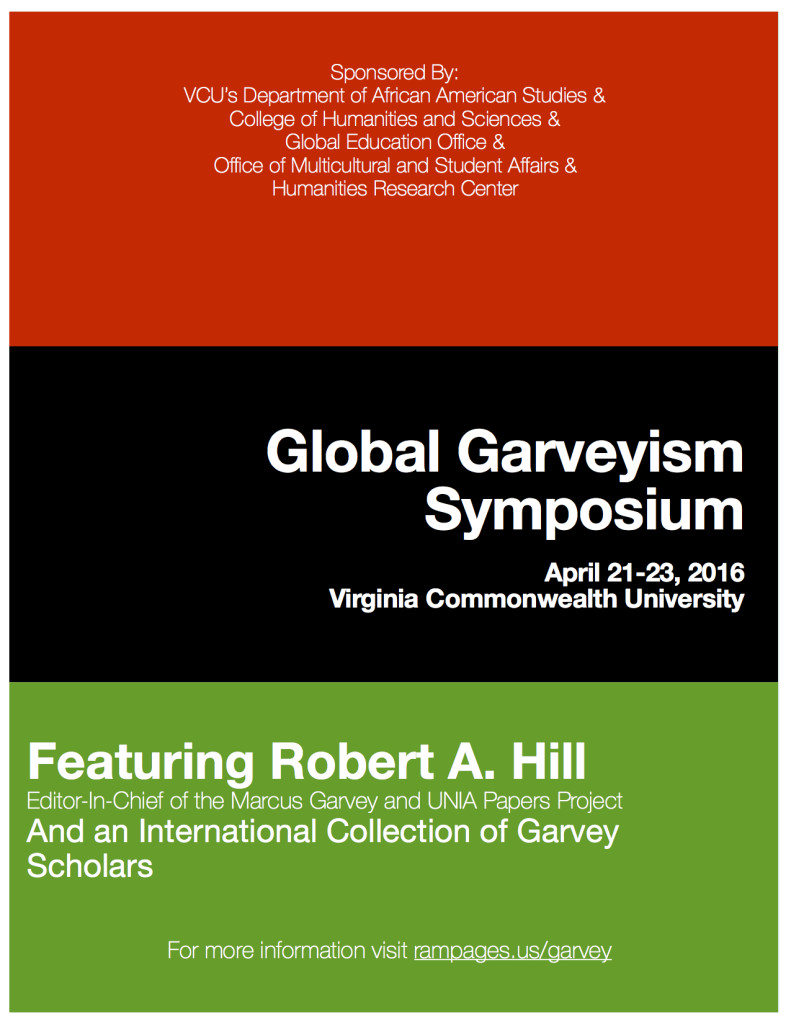 Later this month, April 21-23, Virginia Commonwealth University will be hosting a symposium on “Global Garveyism,” and inviting about twenty Garveyism scholars to campus for a series of panels and roundtable discussions. The aim of the symposium is to critically examine the extraordinary success of Jamaican activist Marcus Garvey’s Harlem-based, globe-spanning mass movement during the interwar years and beyond. Papers will explore aspects of the movement’s resonance and reach in Central, West, and South Africa, in Central America and the Caribbean, in the United States and Canada, in Australia. The symposium is also an effort, in a broader sense, to catalyze the momentum that has been growing around Garvey Studies in the academy since the beginning of the century—an effort to, after several decades of neglect in academic circles, demonstrate Garveyism’s centrality in the numerous narratives and historiographies where the movement has been passed over and marginalized.1

The study of Garveyism, perhaps more than any other subject, reveals the lingering tensions that prevail from the uneven acceptance of African American history within the predominantly white academy. It remains rather remarkable, as historian Steven Hahn noted in 2009, how little professional scholars know “about what is acknowledged to be the greatest mass movement of people of African descent in the twentieth century.”2 Indeed, forty years ago, responding to this perplexity, and pushing back against the tendency to dismiss Garvey as a boorish oddity, Garvey scholar Tony Martin opened his masterpiece, Race First, with the simple observation that “no one could have organized and built up the largest black mass movement in Afro-American history, in the face of continuous onslaughts from communists on the left, black reactionaries on all sides, and the most powerful governments in the world, and yet be a buffoon or a clown, or even an overwhelmingly impractical visionary.”3

And yet until recently, Martin’s common sense invocation was met with resistance in the American academy. Before the turn of the century, only two books on Garvey, the UNIA, and Garveyism were published by academic presses: E. David Cronon’s Black Moses (1955), which argues that Garvey sold “an unrealistic escapist program of racial chauvinism” to “the ignorant black masses”; and Judith Stein’s The World of Marcus Garvey, in which Stein argues that the “methods and visions” of the UNIA were shaped by “the fatalism of the powerless” and “the utopias of hustlers and charlatans.”4 In influential histories of the interwar period, Garvey and the UNIA continue to be briefly summoned, as Hahn observes, to serve as foils, and to be quickly “marginalized, dismissed, or derided.”5 In recent years, a rash of excellent and well-regarded scholars have misidentified the UNIA as the United Negro Improvement Association—a dispiriting measure of the extent to which academics remain disinclined to give Garveyism serious consideration, and a measure of the extent to which they are empowered in this course. 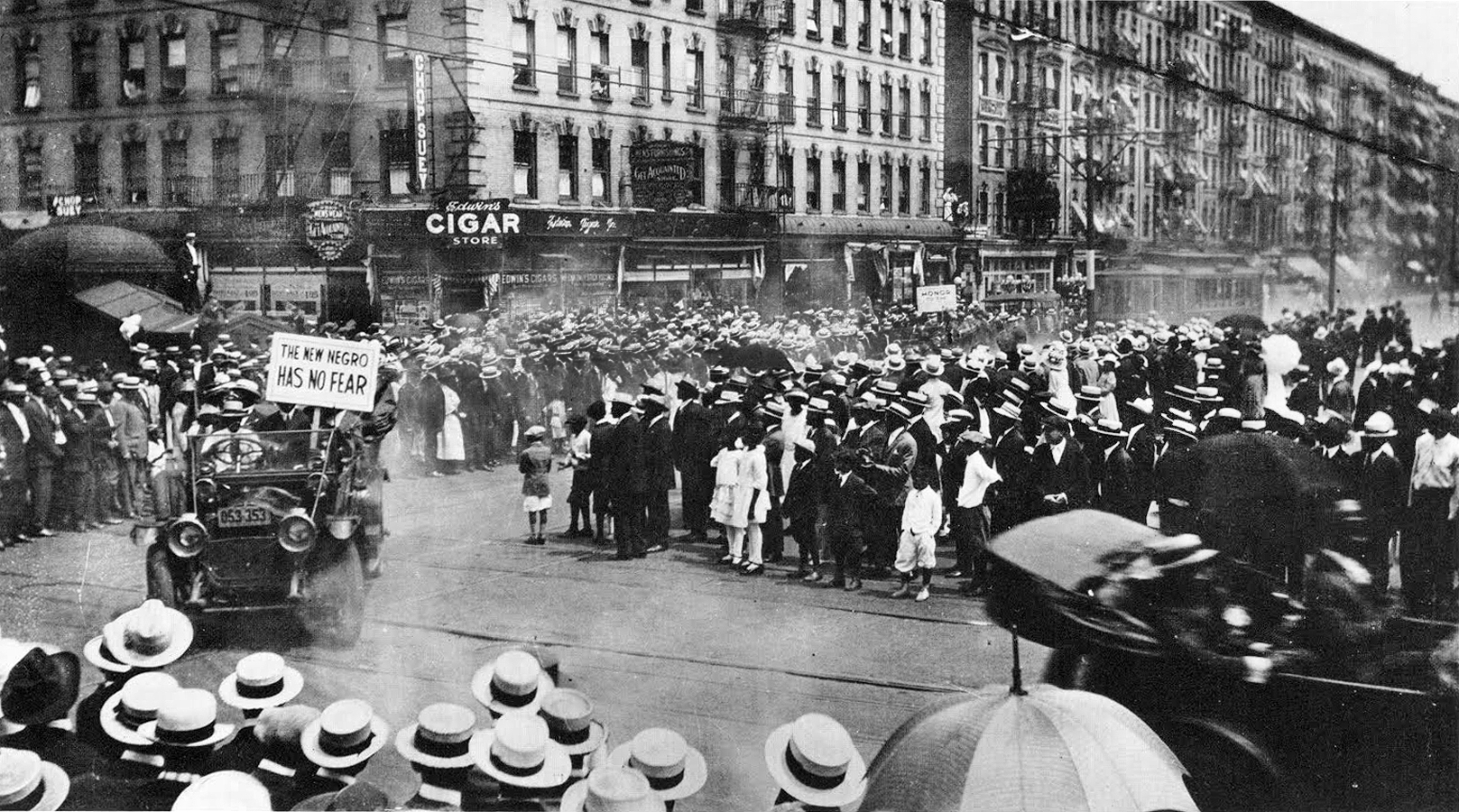 Part of the reason for this neglect can be attributed to the nature and the timing of African American history’s integration into the white American academy. Bracketed within what Hahn calls a “liberal integrationist framework”—and what Komozi Woodard calls the “Cold War academy”—historical work on the black freedom struggle long emphasized African American connections to—rather than alienations from—the nation-building project of the United States. The types of transnational and diasporic visions that animated the work of George Washington Williams, Anna Julia Cooper, W.E.B. Du Bois, C.L.R. James, Claudia Jones, George Shepperson, and many others—the types of framings that allow us to glimpse the contours of Garveyism in its proper, global context—were quieted within the academy. (Extra-national perspectives have, of course, been recently “discovered,” with insufficient acknowledgement of the pioneering work in this field by black scholars.)

With the study of Garveyism neglected in the American academy, the history of the movement was for many decades preserved by publications in independent presses, by West Indian scholars like Martin, Rupert Lewis, and Amy Jacques Garvey, and by participants, past and present, of the Garvey movement.6 Robert A. Hill’s Marcus Garvey and Universal Negro Improvement Association Papers Project, which has been building a miraculous archive of Garveyism since the 1970s, operates out of UCLA, but remains powerfully reminiscent of the preservationist efforts of Arturo Schomburg and a host of legendary African-descended archivists who have kept alive a countermemory of African diasporic history against the pressures of erasure imposed by the global guardians of white supremacy.

The failure of scholars to properly reckon with the legacy of Garveyism has generated layers of mistrust between the professors and graduate students who study the movement and the activists and organizers who continue to carry the banner of the UNIA and imbibe the lessons of the movement. Because of this, a properly realized subfield of Garvey Studies must not only integrate the study of Garveyism creatively and critically into the mainstream narratives of American academic discourse, but must also find a way to bridge the divide between Garvey scholars working inside universities and outside of them. The Global Garveyism Symposium will be hosting a community forum that seeks to spark these conversations, led by Garvey historians, intellectuals, and activists without university affiliation. Just as scholars have long relied on non-academic experts of the movement to better understand the contours—and track down the documents of—the Garvey movement, there is much at these types of forums for scholars to learn. There is so much more work to be done.

For more information about the Global Garveyism Symposium, please visit the website or contact Dr. Ewing at aewing2@vcu.edu. Admission is free and open to the public.

Comments on “Global Garveyism: Mapping Those at Home and Abroad”