This post is part of a new and recurring blog series I am editing, which announces the publication of selected new books in African American and African Diaspora History. Today is the official release date for Dark Work: The Business of Slavery in Rhode Island, published by New York University Press.

The author of Dark Work is Christy Clark-Pujara. Professor Clark-Pujara is an Assistant Professor of History in the Afro-American Studies Department at the University of Wisconsin-Madison. She earned her Ph.D. from the University of Iowa. Her research focuses on the experiences of black people in French and British North America in the 17th, 18th and early 19th centuries. She is particularly interested in retrieving the hidden and unexplored histories of African Americans in areas that historians have not sufficiently examined—small towns and cities in the North and Midwest. Professor Clark-Pujara contends that the full dimensions of the African American and American experience cannot be appreciated without reference to how black people managed their lives in places where they were few. Furthermore, an absence of a large black populace did not mean that ideas of blackness were not central to the social, political, and economic development of these places.

She has published essays on her research in the New England Ancestors Magazine and Rhode Island History. Her next book project, From Slavery to Suffrage: Black on the Wisconsin Frontier, 1740 to 1866, will examine how the practice of race-based slavery, black settlement, and debates over abolition and black rights shaped white-black race relations in the Midwest. 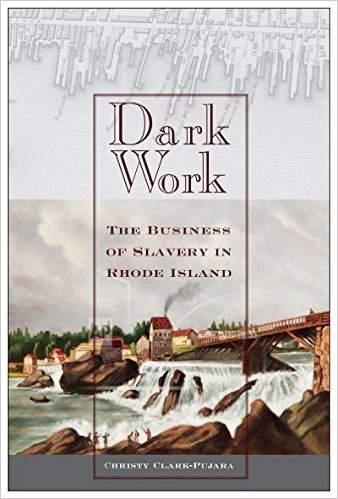 Historians have written expansively about the slave economy and its vital role in early American economic life. In Dark Work, Professor Christy Clark-Pujara tells the story of one state in particular whose role was outsized: Rhode Island. Like their northern neighbors, Rhode Islanders bought and sold slaves and supplies that sustained plantations throughout the Americas; however, nowhere else was this business so important. During the colonial period trade with West Indian planters provided Rhode Islanders with molasses, the key ingredient for their number one export: rum. More than 60 percent of all the slave ships that left North America left from Rhode Island. During the antebellum period Rhode Islanders were the leading producers of “negro cloth,” a coarse wool-cotton material made especially for enslaved blacks in the American South.

Professor Clark-Pujara draws on the documents of the state, the business, organizational, and personal records of their enslavers, and the few first-hand accounts left by enslaved and free black Rhode Islanders to reconstruct their lived experiences. The business of slavery encouraged slaveholding, slowed emancipation and led to circumscribed black freedom. Enslaved and free black people pushed back against their bondage and the restrictions placed on their freedom. It is convenient, especially for northerners, to think of slavery as southern institution. The erasure or marginalization of the northern black experience and the centrality of the business of slavery to the northern economy allows for a dangerous fiction—that North has no history of racism to overcome. But we cannot afford such a delusion if we are to truly reconcile with our past.

“It is well-known that Rhode Island’s mercantile and manufacturing economies served the larger Atlantic plantation complex, but Clark-Pujara asks an important new question: how did the black freedom struggle unfold in a place materially invested and implicated in the expansion of human bondage across in the Americas? Clark-Pujara reconstructs the lives and livelihoods of black Rhode Islanders, for whom the violence of enslavement, the prospects of emancipation, and the limits of freedom unfolded in accordance with the demands for food in the Caribbean, for slaves in the Carolinas, and for clothing in Louisiana.” —Seth Rockman, Brown University

Ibram Kendi: Books have creation stories. Please share with us the creation story of Dark Work—those experiences, those factors, those revelations that caused you to research this specific area and produce this unique book.

Christy Clark-Pujara: The road that lead to Dark Work, began when I was in first grade and struggled to learn to read. Identified as significantly behind my peers, I was removed from class during reading, for one-on-one sessions. It took three years for me to read on grade level. I worked hard to learn to read and soon realized that few things brought me greater pleasure than loosing myself in a book. As an adolescent, I fell in love with history when I found out that I enjoyed history books just as much as fiction. Ironically, in high school, I found my history classes to be rather boring—as we largely focused on memorizing names, dates, and events. Text book history and historical monographs seemed worlds apart, until I went to college. My college professors emphasized what we could learn and change about ourselves and our world through historical analysis. History, they claimed, was the means by which we could understand and transform the present. I was hooked. I wanted to do what they did. I decided to become a historian and write the history of my ancestors.

After reading Joanne Pope Melish’s Disowning Slavery: Gradual Emancipation and “Race” in New England, 1780-1860 (1998) in graduate school, I became mildly obsessed with the history of northern slavery. Like most Americans, I associated slavery with the American South. I engrossed myself in the scholarship, reading everything from Lorenzo Greene’s The Negro in Colonial New England (1968) and Edgar McManus’ Black Bondage in the North (1973) to Graham Russell Hodges, Root and Branch: African Americans in New York and East Jersey, 1613-1863 (1999) and Leslie Harris’ In the Shadow of Slavery (2003). My focus on Rhode Island was rather serendipitous.

I began researching slavery and emancipation in the North a few years after Ruth Simmons–the first African American to lead an Ivy League university–commissioned the report on Brown University and its connections to the institution of slavery in 2003. After reading the report and the secondary literature that highlighted Rhode Island’s overt investments in slavery, I was surprised to find out that no one had written a history of how those economic ties to the business of slavery had shaped the lives of the enslaved and curtailed the freedom of their descendants.

The erasure or marginalization of the black experience and the centrality of the business of slavery to the northern economy allows for a dangerous friction— that the North has no history of systemic economic, social, and political racism to overcome. I dedicated myself to reconstructing the lives of black Rhode Islanders from the colonial period through the American Civil War. Dark Work builds and expands on my doctoral dissertation, “Slavery, Emancipation and Black Freedom in Rhode Island, 1652-1842.”

Click here to read the introduction to Dark Work.

Comments on “Dark Work: A New Book on the Business of Slavery in Rhode Island”