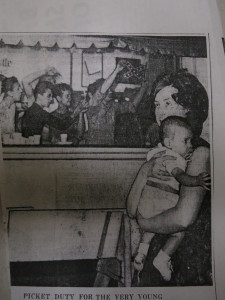 Over the years, what many people recognize as the Confederate flag, the “Stars and Bars,” which decorated several official flags that insurrectionists who fought against the United States flew during the Civil War (1861-1865), has symbolized different types of American identity.

During the 1950s, white Southerners who opposed racial integration and civil rights for black Americans used the Confederate flag as a symbol of their resistance against what they saw as a tyrannical federal government that sought to eradicate their cultures and customs. Some Southerners called these mores their “way of life.”

They were not totally wrong since their official “way of life” involved oppressing American blacks in practically every possible way.

White people could treat black citizens like dogs, or worse, outright terrorize them, at voting polls, in courts, at workplaces, in stores, at theaters, in public schools. Racial segregation even ruled cemeteries.

So, when Supreme Court decisions and federal laws sided with citizens who fought against racist segregation, white Southerners knew their way of life’s days were numbered. They resisted the civil rights movement. They opposed equal citizenship for black Americans and equal protection of the law for black people.

They showed their defiance the same way Southern insurrectionists did during the Civil War: they flew their Stars and Bars.

Nowadays, some white Southerners (and black ones too) say that the flag serves as a symbol of their heritage. It honors their ancestors. They argue that the Confederate flag does not stand for slavery; even though that flag flew over armies that marched to create a new nation built to preserve white supremacy and racial slavery.

The Confederate political leader, Alexander Stephens, made plain why the insurrectionists fought that war and flew their flag when he explained that his new government’s, “foundations are laid, its cornerstone rests, upon the great truth that the (N)egro is not equal to the white man; that slavery, subordination to the superior race, is his natural and normal condition.”

Perhaps the cultural and political meanings that the Confederate flag represented in the 1860s and in the 1950s have changed.

Perhaps now, in the 2010s, the Confederate flag means different things – heritage and sectional pride – than it meant in the past: massive resistance against the civil rights movement and a new nation to protect white people’s ability to enslave black people.

But that flag’s connection to the white nationalist terrorist’s shooting of 9 Black people in Charleston, South Carolina, proves that the Stars and Bars still have a great amount of white nationalist, racist, segregationist meaning woven within its fabric.

Historians have shown how supposedly “Southern” forms of racism and terrorism, as well as activist movements against those cultural and political practices, existed throughout the nation.

For example, contrary to notions of its strictly rural Southern existence, during its resurgence in the 1920s the Ku Klux Klan wielded power and influence in cities across the country.

Even during the 1960s, when some whites outside the South wanted adamantly to oppose any type of civil rights for black Americans, they used two of the strongest, clearest symbols to communicate their political views and cultural identity: KKK hoods and Confederate flags.

In the summer of 1963, black and white civil rights activists in the Allerton Avenue section of the northeast Bronx, New York, staged nonviolent protests for black people to have more jobs at local White Castle restaurants.

Some of their opponents paraded in KKK hoods, waved Confederate flags, and donned Confederate garb (see below pictures). One counter demonstrator tried to have a nine-month old pose for a picture wearing a replica of a Confederate officer’s hat. 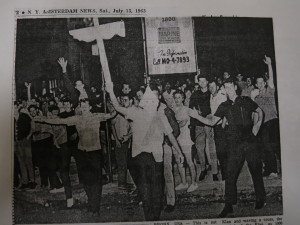 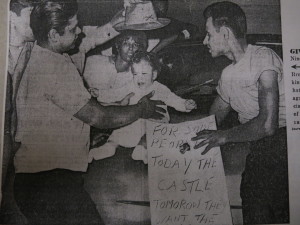 Ironically, many of the white residents of the northeast Bronx neighborhood where those protests occurred descended from Italian immigrants. They stood next to Confederate flags and a person dressed like a Klansman, but at one time the white American nationalists who used those symbols throughout the decades also violently opposed southern Europeans and Catholics immigrating into the United States.

When Bronx whites who opposed the civil rights movement in their own community wanted to express their nationalism and identity, and their political opposition against black employment at White Castle, they knew exactly what symbols to use, what flags to fly, and what chants to shout. They sang, “Dixie.” They yelled, “Go home nigger.” A taxi driver from the community told a New York Post reporter, “We aren’t going to let the colored people take over our neighborhood like they have everywhere else in the city.”

Over the years, the Confederate flag emerged as a very American symbol of white nationalism, white identity, and opposition against any type of civil rights and civil equality for black people in the United States.

Some Southerners claim the Confederate flag as a symbol of their cultural identity and historical heritage, and the Stars and Bars may very well have such sentimental value.

Since the Civil War, Americans around the country have used that flag to symbolize their opposition of black civic equality, even black people’s very humanity.

As twenty first century Americans call for the flag’s removal from public buildings, especially state capitals, historians should also do more research into the ways the Confederate flag served as a powerful national symbol, not merely a regional or sectional one, for white nationalism and domestic racist terrorism.

Comments on “Confederate Flags in the Jim Crow North”