Where did Jim Crow segregation and civil rights activism take place? A great deal hinges on how this question gets answered.  Over the past two decades, scholars have shown how racism permeated the Northeast, Midwest, and West, and how Black people and their allies fought back against the national, state, and local policies and practices that denied them full citizenship and humanity. A new edited collection from Jeanne Theoharis, Brian Purnell, and Komozi Woodard—three scholars who have led this flowering of research—is a powerful reminder of both how much our understanding of the geographies of the Black freedom movement have changed over the past generation, and also how much work remains to be done to dislodge the popular narratives that segregation and civil rights were largely southern phenomena. The essays in The Strange Careers of the Jim Crow North offer a wealth of insights.

The authors in this anthology attend carefully to the language and nuances of their sources. Black people in the North, for example, regularly used the term Jim Crow to describe their local situations. This was not simply a clever rhetorical move, but rather a strategy that activists used to try to drag an often-covert system of racial oppression out into the open. Aliyah Dunn-Salahuddin and John Portlock, in their respective essays on the 1966 Hunters Point uprising and newspaper editor Charlotta Bass, show how Black Californians consistently called out the racism they faced in the Golden State. Say Burgin details how Detroit judge George Crockett Jr. took his judicial peers to task for maintaining a two-track system of justice.  This “Jim Crow judiciary” exacerbated police brutality and prosecutorial overreach. Similarly, in his study of “Jim Crow Policing,” Shannon King demonstrates that Black New Yorkers in the 1930s and 1940s were both over-policed and under protected by the New York Police Department. He also reveals that Black New Yorkers saw policing as a civil rights issue.

At the same time, several essays illustrate the importance of listening carefully to white sources to understand how white officials and citizens expressed their resistance to civil rights in both coded and blatantly racist language. Mary Barr shows how white liberals in Chicago’s North Shore used seemingly race-neutral zoning and land-use policies to avoided integration, thereby achieving “segregation without segregationists.”  Similarly, Tahir Butt uncovers how the City University of New York’s Open Admissions policy extolled the virtues of colorblindness while disproportionately benefiting white residents. Laura Warren Hill, in contrast, analyzes a trove of letters from average white citizens to the mayor of Rochester, NY that openly share racial prejudices in response to the urban revolts of 1960s and 1970s. 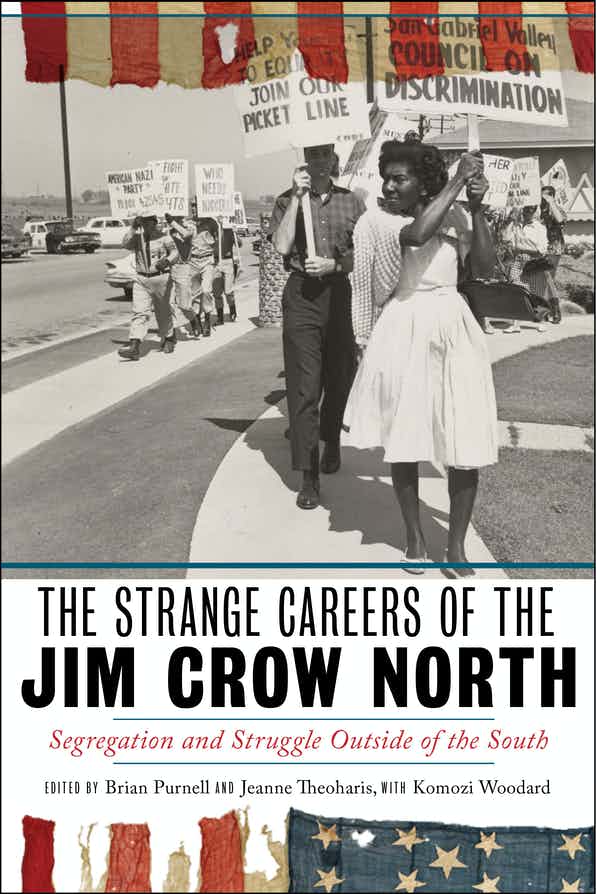 The Strange Careers of the Jim Crow North strikes a nice balance between exploring the magnitude of the structures of racial apartheid, without losing sight of the people who fought against these systems. Understanding structural racism is important, because even after two decades of scholarship on the topic, most textbooks and popular histories still treat Northern racism as accidental or as being caused by market forces.  The editors seek to dispel this myth of Northern innocence.  “Using a Jim Crow frame,” the editors write, “reveals how northern racism worked as a racial system with its own ideologies, rules, cultures, and practices, refuting the idea that racism outside the South was haphazard, transplanted, or resulting from private prejudices” (9).

While popular magazine articles and books in the past few years have introduced more Americans to the concept of systemic racism, the editors rightly note that these studies of racial inequality frequently ignore or obscure Black activism in the North. One can learn a great deal about mortgage redlining, for example, without understanding that ordinary Black people identified, exposed, and challenged these policies at the time. Several of the essays in this anthology offer a corrective to this historical erasure. Kristopher Bryan Burrell examines how Ella Baker and Mae Mallory fought school segregation in New York City. Focusing on 1970s Milwaukee, Crystal Marie Moten analyzes how Black women fought for worker’s rights and economic justice. Like their counterparts in the South, Black activists in the North were organized, resourceful, and persistent as they fought for decades against Jim Crow.  These stories need to be told alongside those that undercover the histories of policies that created and maintained housing segregation, school segregation, and mass incarceration.

One of the great pleasures of reading the introduction to this anthology is seeing the editors take stock of the historiographical shift that they stimulated. Freedom North: Black Freedom Struggles Outside of the South, 1940-1980 (2003) and Groundwork: Local Black Freedom Movements in America (2005), both edited by Jeanne Theoharis and Komozi Woodard and including essays by Brian Purnell and other scholars, introduced new ways of thinking about the geographies and legacies of the civil rights and Black freedom in the United States.  These collections have been extraordinarily generative, and I count myself among the cohort of scholars transformed by these books.

In the introduction to The Strange Careers of the Jim Crow North, the editors express a sense of well-earned frustration at the glacial pace at which national commemorations, textbooks, and popular histories have responded to the large body of scholarly on civil rights in the North.  The political and personal commitments that led most Americans to refuse to acknowledge the history of the Jim Crow North can be disheartening. However, I take inspiration from the work of the scholars in this volume whose essays illuminate the importance of telling historical truths many people would rather not hear.

Matthew F. Delmont is the Sherman Fairchild Distinguished Professor of History at Dartmouth College. His research and teaching focuses on African-American History and U.S. History. He is the author four books: Black Quotidian: Everyday History in African American Newspapers (Stanford University Press, 2019); Making Roots: A Nation Captivated (University of California Press, 2016); and Why Busing Failed: Race, Media, and the National Resistance to School Desegregation (UC Press, 2016); and The Nicest Kids in Town: American Bandstand, Rock 'n' Roll, and the Struggle for Civil Rights in 1950s Philadelphia (UC Press, 2012). Follow him on Twitter @mattdelmont.