loading...
By Ibram X. Kendi October 23, 2016 Comments Off on Black Republicans: A New Book on the Transformation of the GOP

This post is part of a blog series I am editing, which announces the release of selected new works in African American and African Diaspora History. Black Republicans and the Transformation of the GOP was recently published in the Politics and Culture Modern America Series in the University of Pennsylvania Press. 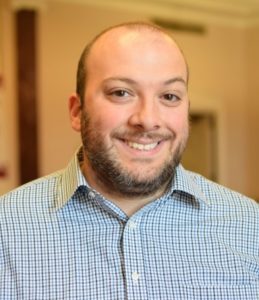 The author of Black Republicans and the Transformation of the GOP is Joshua D. Farrington. Professor Farrington teaches history and African American Studies at the University of Kentucky and Eastern Kentucky University. After completing his undergraduate studies at High Point University in North Carolina, he earned a M.A. and Ph.D. from the University of Kentucky. His research interests include the history of the post-World War II Republican Party and the Black Capitalism movement of the 1960s and 1970s. His publications include chapters published in Britta Waldschmidt-Nelson and Anna von der Goltz, eds., Inventing the Silent Majority in Western Europe and the United States: Conservatism in the 1960s and 1970s (Cambridge University Press, forthcoming) and Daniel K. Williams and Laura Jane Gifford, eds., The Right Side of the Sixties: Reexamining Conservatism’s Decade of Transformation(Palgrave Macmillan, 2012). He also worked three years as a staff writer for The Kentucky African American Encyclopedia (University Press of Kentucky, 2015), and served as an editor with with Louie B. Nunn Center for Oral History. Follow him on Twitter @jdfarr4. 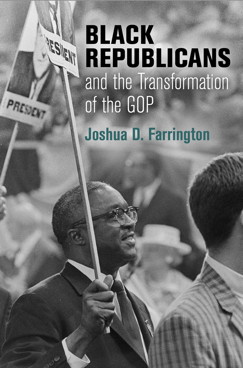 Reflecting on his fifty-year effort to steer the Grand Old Party toward black voters, Memphis power broker George W. Lee declared, “Somebody had to stay in the Republican Party and fight.” As Joshua Farrington recounts in his comprehensive history, Lee was one of many black Republican leaders who remained loyal after the New Deal inspired black voters to switch their allegiance from the “party of Lincoln” to the Democrats.

Ideologically and demographically diverse, the ranks of twentieth-century black Republicans included Southern patronage dispensers like Lee and Robert Church, Northern critics of corrupt Democratic urban machines like Jackie Robinson and Archibald Carey, civil rights agitators like Grant Reynolds and T. R. M. Howard, elected politicians like U.S. Senator Edward W. Brooke and Kentucky state legislator Charles W. Anderson, black nationalists like Floyd McKissick and Nathan Wright, and scores of grassroots organizers from Atlanta to Los Angeles. Black Republicans believed that a two-party system in which both parties were forced to compete for the African American vote was the best way to obtain stronger civil rights legislation. Though they were often pushed to the sidelines by their party’s white leadership, their continuous and vocal inner-party dissent helped moderate the GOP’s message and platform through the 1970s. And though often excluded from traditional narratives of U.S. politics, black Republicans left an indelible mark on the history of their party, the civil rights movement, and twentieth-century political development.

Black Republicans and the Transformation of the GOP marshals an impressive amount of archival material at the national, state, and municipal levels in the South, Midwest, and West, as well as in the better-known Northeast, to open up new avenues in African American political history.

“Joshua D. Farrington has given scholars, pundits, and the general public the timeliest book yet about how the GOP purged itself of racial minorities and cast its lot with America’s declining white majority. A book that is at once complex and clear, Black Republicans and the Transformation of the GOP is a must read for any student of politics or history interested in how the GOP’s failed answers to the race question has pushed a once-great national party to the brink of political self-destruction.” —Devin Fergus, The Ohio State University

Ibram X. Kendi: Your book is finally out after years of researching and writing. What are you most proud of about your book?

Joshua D. Farrington: I am most proud to see the stories and contributions of black Republicans to the twentieth century African American freedom struggle are now published for the world to see. For too long, their contributions have been marginalized, and their role in history ignored. While even nationally known black Republicans, such as U.S. Senator Edward W. Brooke or Gerald Ford’s Secretary of Transportation William Coleman Jr., have been somewhat sidelined in our narratives of black politics, they have at least been mentioned. I am most pleased to see that the lesser-known stories of state-and-local black Republicans have finally found a place in history. These political activists include Richard McClain, a dentist and state representative from Cincinnati, who led the drive to integrate higher education in Ohio, and Indiana state senator Robert Lee Brokenburr, who spearheaded legislation that established the state’s fair employment commission and banned racial discrimination in public accommodations.

Because I have lived in Kentucky for almost a decade now, I am also proud to see the contributions of the Commonwealth’s seminal generation of black politicians reach the national stage. Since the 1930s, Louisville’s black community consistently elected black Republicans to state-wide office. For nearly three decades, black Republicans like Charles W. Anderson and Jesse Lawrence often fought lonely, but courageous battles against segregationists in the General Assembly. When Kentucky finally passed its first civil rights bill in 1966, it was pushed through by its chief sponsor, black Republican legislator Jesse Warders. While the bill never would have never been written without Warders’ leadership, it is the state’s moderate Democratic governor, Ned Breathitt, who often gets the credit for its passage. Warders’ role has literally been erased from most of the state’s leading histories of the bill.

I’m also proud to see that little-used archives and special collections of local black Republican activists from across the country have finally seen the light of historical inquiry. Indeed, while I enjoyed going through the papers of Jackie Robinson or Edward Brooke at leading national repositories, one of the most rewarding experiences as a researcher has been digging through overlooked materials in local archives. For example, the papers of L.K. Jackson at Indiana University Northwest have never been used except in local histories of Gary, Indiana. But, in them is a treasure trove of materials relating to black politics, religion, and protest in a Northern city. Similarly, Clarence L. Townes’ papers at Virginia Commonwealth University contain box after box of materials that point to decades of sustained efforts by black Republicans in Richmond to reform their party and secure the successful implementation of civil rights legislation.

Much of the information found in these oft-ignored archives could be vital to reshaping our historical understanding not only of black Republicans, but also the history of white conservatism and opposition to civil rights. Take, for instance, the correspondence found in the papers of Helen Edmonds at Duke University. As a Republican and history professor at North Carolina Central University, Edmonds often sought intellectual debates with segregationists, and her letters include revealing and candid back-and-forths with leading conservative ideologues, including family members of arch-conservative William F. Buckley. It’s the history of women like Edmonds, and men like L.K. Jackson and Clarence Townes, that I am most proud to see in print. Agree with their politics or not, their place in history books is long overdue.