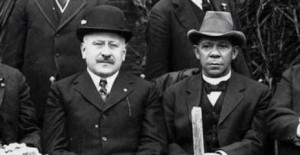 The following guest post was written by David Weinfeld. He is a sessional instructor at the Centre for the Study of the United States at the University of Toronto. He previously taught at Queens College, Temple University, and New York University, where he earned his doctorate in the joint program in History and Hebrew and Judaic Studies in 2014. Dr. Weinfeld studies American Jewish intellectual history, although he is also interested in American, European, Jewish, and intellectual history more broadly. His dissertation is titled “What Difference Does the Difference Make? Horace Kallen, Alain Locke, and the Development of Cultural Pluralism in the United States.”

On July 9, the late African American civil rights activist Julian Bond spoke on a panel at Manhattan’s Center for Jewish History about Sears Roebuck owner and philanthropist Julius Rosenwald (1862-1932). Bond told a story of his father, educator Horace Mann Bond, who had worked for the Rosenwald Fund monitoring the schools established for Black children all across the segregated South.

The Rosenwald Fund had set up Horace Bond with nice clothes and a fancy car. While driving through rural Alabama, his car got stuck in the mud. Two Black men approached, and Horace thought they would demand money to get his car out. They asked him, “what’s a well dressed guy like you doing here in car like that?” Horace replied, “I work for the Rosenwald Fund,” to which they responded: “You work for Captain Julius! No charge!”

In moments of collaboration and tension, Jewish whiteness and socioeconomic security shaped their relationship with the Black American community. This was true in the 1960s, the period celebrated at the new exhibit marked by the Rosenwald panel: “Allied in the Fight: Jews, Blacks, and the Struggle for Civil Rights.” A more nuanced understanding of Black-Jewish relations could help reconstruct this alliance. Instead of being nostalgic, Jews should learn from the past to more effectively fight for racial equality today.

A first step would be to acknowledge this power and wealth imbalance as the chief cause of conflict between the two communities. The Israeli/Palestinian situation, then as now, remains a distraction from the Black-Jewish story in America. In 1970, Black Power leader Kwame Turé (then known as Stokely Carmichael) threw his support behind the “just struggle” of the Palestinians. On August 18, 2015, three days after Julian Bond’s death, one thousand Black activists, artists, and intellectuals signed a Black Solidarity Statement with Palestine. Figures such as Angela Davis, Cornel West, and Talib Kweli drew parallels between Israel’s ongoing occupation of Palestinian territories and the “fourth century of Black oppression in the present-day United States.”

Yet for past half century, the majority of African Americans have not focused their attention on the Middle East. The Black people of Harlem and Ferguson are not worried about Bibi Netanyahu. Nor are they concerned about the deterioration of the Black-Jewish alliance. Only Jews care about that. For while most Jews prosper in the United States and have the luxury to wax nostalgic, many African Americans still suffer from failing schools, wage and education gaps, and constant police harassment and brutality. Today’s Black civil rights activists do not have time to gaze fondly on photos of Reverend Martin Luther King Jr. and Rabbi Abraham Joshuah Heschel marching together. They are still marching.

When Black Lives Matter leaders Marissa Janae Johnson and Mara Jacqueline Willaford disrupted a Bernie Sanders speech in Seattle, it created another moment of confusion. Sanders had been a dedicated civil rights activist in the 1960s. His presidential platform advances policies that would benefit poor people of all colors. But to Johnson and Willaford, Sanders’ Jewishness was not relevant. Agree or disagree with their tactics, they hoped to call attention to a struggle for racial justice not yet complete.

To be sure, there are still Jewish allies. The group Jews for Racial and Economic Justice (JFREJ) root their support for progressive causes like Black Lives Matter in Judaic values of tzedakah (charity) and tikkun olam (repairing the world). They seek social change in the tradition of the Hebrew prophets. They find inspiration in the Yiddish socialist Bund and Jewish civil rights martyrs Michael Schwerner and Andrew Goodman, who along with African American James Chaney gave their lives to bring Jim Crow to an end.

But these progressive Jews look forward, not backward. Many JFREJ, themselves critics of Zionism, don’t expect African Americans to support Israel in a tit for tat manner. Even as the Jewish population of color has grown significantly, they understand that most Jews in the United States benefit from white privilege, as American Jews have for generations. With this understanding, they feel an obligation to help. They resist the paternalism of the past, and treat people of color as allies and equals, not charity cases in need of instruction. The most important change is that JFREJ are content without positions of authority in a movement they understand does not belong to them. Long used to leading, they are now prepared to listen.