Today’s guest post comes from Edwin Jackson, a licensed funeral director and embalmer in Maryland and Oklahoma. Born and raised in Baltimore, Edwin has been employed at Vaughn C. Greene Funeral Services in Baltimore for the last 10 years. In May 2016, he will graduate from Morgan State University with an MA in African American Studies. In this post, he describes the role of black funeral home directors–historically and now–as voices of their communities, political leaders, and outspoken civil rights activists.

Imagine sitting in your home–perhaps asleep in your bed or at dinner with your family–when suddenly the phone rings. You stop what you are doing to answer it. The local sheriff is on the other end and says he needs you to pick up a body. For you and your family, this is normal because after all, you are on call 24-hours a day; seven days a week. You’re used to putting your evenings and sleep on hold. In this case, you’re Chester Miller, a funeral director and a family is in need of your services. Today you have been called to pick up a body that was found floating in the Tallahatchie River. You arrive on the scene and immediately you see the battered, broken, and decomposed body of a young boy.

You’ve been a funeral director in Mississippi for as long as you can remember. You know what a lynching looks like, but the image of this young boy is still unsettling nonetheless. However, something is not right. You’ve been ordered to take the body straight to the cemetery. Clearly, the sheriff is trying to cover up what has happened. Usually you would take the body back to the funeral home to begin the embalming process – to chemically preserve the remains – only later making arrangements with the family to have a proper “homegoing” service.1 But, you do what the sheriff instructs in addition to discretely grabbing the only thing on the body that looks valuable–a gold ring with the initials “L.T.” Before he is buried, a family member appears to stop the burial insisting that his mother would want him to be sent back home to Chicago for interment. The body is that of Emmett Till and the ring confirms his identity.

Till’s lynching at the hands of white supremacists as he vacationed with family in Money, Mississippi in 1955, as well as the events thereafter would be forever seared into the African American memory. Mainly because Till’s murder, like the deaths of numerous unarmed African American youth in this contemporary moment, galvanized black youth of that era to spark a new phase of the struggle for civil rights. Through the coordination of funeral directors Chester Miller and A.A. Rayner of Chicago, Till’s remains were shipped to Central Station, arriving on September 2, 1955, to show the world what was truly happening in America. Understanding the importance of her son’s murder, Mamie Till asked A.A. Rayner to prepare him for an open casket service “so the world could see what they did to my boy.”2 Emmett Till’s body was evidence of the state of the U.S. south.

I use this story surrounding Emmett Till’s death to show how death has been used as a catalyst within the civil right movement and emphasize the role black funeral directors have played in such movements.3 Sixty years later, we see the maturity of a new movement that now flies under the banner of Black Lives Matter. We also see a new generation of black funeral directors, such as myself, looking to support our community in the undertaking of such movements. The founders of this movement describe it as “an ideological and political intervention in a world where Black lives are systematically and intentionally targeted for demise….a call to action and a response to the virulent anti-Black racism that permeates our society.”4

This movement, much like the civil rights movement of the 1950s and 1960s, was sparked by the death of one of the sons of the black community–Trayvon Martin. Many have called Martin the Emmett Till of our time, drawing parallels between the two because of the closeness in age and the circumstances that led to their violent deaths. Although controversy still looms over the death of Martin, his death like Till’s led the nation to reexamine the issues of race and race relations while igniting youth led movements. Beyond the social, political, and legal implications of both these cases is the families and the communities and the fact that they entrusted the black funeral director with the handling of the remains. 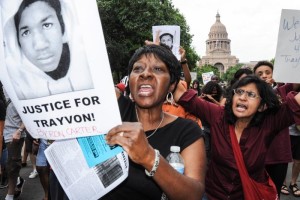 The role of black funeral directors then, as now, has been to serve the black community in their time of need. Unbeknownst to the public and perhaps to history is the role they serve as more than just funeral service providers. Often times you will find that the local funeral director is both a principal participant, calling attention to the issues that plague the black community and the wealthiest individual in his/her town. Because of this, he/she “wears many hats” as the voice for the community and as a political leader–intricate to the economic base, and social compass.

The majority of black funeral homes thrive on the loyalty of the black community, so the investment in the community itself is not only natural but logical. Local activists knew they could call upon the local funeral directors for bail money, to negotiate compromises with local white leaders, and  prepare the bodies of slain civil rights workers for burial.5 Many of them were targets of the White Citizens Councils and the Ku Klux Klan because of their involvement. In cases of Emmett Till, Dr. Martin Luther King Jr., Medgar Evers, Jimmie Lee Jackson, and Malcolm X (among many others), black funeral directors often found themselves at the center of these tragedies and sometimes in the national spotlight since they were the last ones to see the bodies and the ones who helped to orchestrate the homegoing services, which served as platforms for calling the community to action.

During the Black Lives Matter Movement, the role of black funeral directors has not changed. Once again, we are called to service our communities. Trayvon Martin’s body was entrusted to Roy Mizell of Roy Mizell and Kurtz Funeral Home in Fort Lauderdale, Florida. During the course of the investigation, Martin’s body was autopsied. The medical examiner’s official report showed a fatal gunshot wound and broken skin on his knuckles suggesting a fight. Roy Mizell, himself an activist and active member of the NAACP, gave an interview stating that “as far as his hands and knuckles, I didn’t see any evidence that he had been fighting anybody.”6 Although his response would come under heavy scrutiny as to whether or not it was truthful, his involvement reveals the complicated role that the funeral director plays in the black communities and the ongoing struggles for civil rights. With a history of police distrust in black communities– and the fact that the medical examiners sometimes provide evidence to favor the agenda of the state – black residents often turn to the funeral director during these difficult moments. The painfully intimate relationship black funeral directors hold with our slain brothers and sisters convicts us to speak for the dead as they cry out for justice and as we provide some level of comfort to the grieving community.

Most recently, the death of Freddie Gray at the hands of the Baltimore City Police would bring thousands to pay their respects, including many high profile activists and politicians. Grays’s death would spark a number of riots and protests that would engulf Baltimore for weeks. With his services entrusted to the funeral directors of Vaughn C. Greene Funeral Services in Baltimore, homegoing services were orchestrated in such a way that they would provide dignity and respect to Gray and his loved ones, while also displaying evidence of injustice available for the public to see. Gray’s funeral as well as those of Mike Brown and Eric Garner served as platforms that fueled the fire of the Black Lives Matter Movement.

For a community that has experienced and continues to experience injustices that manifest themselves in the form of the deaths of our sons and daughters, the body is evidence of that injustice. Just as Emmett Till’s body was the burden of proof to convict Jim Crow, the bodies of Trayvon Martin, Tamir Rice, and others unjustly slain prove that Jim Crow’s decedents –more convert forms of racism that plagues our justice system described by Michelle Alexander as mass incarceration – are alive and well in the twenty-first century.