loading...
By Chernoh Sesay Jr. September 9, 2016 Comments Off on Beyond Today’s Vote: Constructions of Black Identity Then and Now

“The political and cultural identities of black people have never been reducible to a discrete and unified list of interests and ideas.”

Since 1972, on average, eighty-five percent of black people have voted for the democratic candidate in Presidential elections. This shift began in the 1960s when 94 percent of African American voters gave the nod to President Lyndon Johnson as a consequence of Johnson’s signing of the 1964 Civil Rights Bill. In 2008 and 2012, excited by the promise of the first black United States president, African Americans voted en masse for Barack Obama.

A superficial reading of these voting patterns suggests that despite their many differences, most African Americans agree on certain political issues. However, it is precisely at these moments of seeming consensus that it is useful to think about black identities as always in formation at the nexus of experience, history, and memory.

Examining the emergence of published African-English authors and their views on Africa during the late eighteenth-century highlights the complexity of black thought and identity in US history. Indeed, it reveals that black identity in North America did not emerge within a zero sum field where blackness could be easily framed according to a neatly organized and discrete field of political and religious interests and perspectives. As the eighteenth-century ended, English-speaking writers of African descent who had been the victims of the transatlantic slave trade began to write into existence public black identities. This authorship of identity, community and remembrance took place against a backdrop of tremendous loss – the loss of generations, the loss of ideas, the loss of cultures, the loss of the past, and the loss of the future.

This long event, or series of events, of death, discontinuity and trauma has shaped scholarly debate about both individual and collective memory in relationship to Phillis Wheatley and Olaudah Equiano–two of the most significant authors of late eighteenth-century African Diasporic Anglo-Atlantic print culture. These two significant figures remind us that black identities have always emerged within constructions of blackness as something simultaneously coherent, contested, and even internally incongruous.

In the case of Phillis Wheatley, black scholars and activists have debated whether her poetry constituted a false consciousness arising from Protestant conversion or a subtle and brilliant critique of proslavery Christianity. I sympathize with the latter reading; however, I am still struck by the tensions of memory in her poetry. To William, Earl of Dartmouth, the British Secretary of State for North America, Wheatley wrote,

…I, young in life, by seeming cruel fate

What pangs excruciating must molest,

What sorrows labour in my parent’s breast?

Here Wheatley invoked the imagined grief of parents who must endure the kidnapping of their daughter. In her more famous poem, “On Being Brought of From Africa to America,” Wheatley redeemed the souls of African slaves, by declaring “Remember Christians, Negros, black as Cain, May be refin’d and join th’angelic train.”

While Wheatley makes the case for emancipation via her parents’ sorrow and the vindication of Africans souls, she also confirms her place of birth as “my Pagan land.” In effect, Wheatley validated and elevated her parent’s bereavement, but dismissed their cosmology; loss was simultaneously critiqued and reified.

We see a similar pattern in the life and autobiography of, Olaudah Equiano or Gustavas Vassa. In his autobiography, Equiano made African religion acceptable, yet he did so by comparing the religious life of the Igbo to Judaism. Equiano closed the theological gap between African and Judeo-Christian worldviews but he did so by using Judaism and Christianity to frame Igbo tradition rather than the reverse. Although Equiano presented a sympathetic picture of African culture, it is Christianity that framed his understanding of Africa’s place in a history of moral and religious progress.1

Besides this particular reading of Equiano stands the more recent question of his African origins. My response to this debate is that even if Gustavas Vassa fabricated his Igbo identity, ideas native to West Africa are still simultaneously lost and reclaimed. In effect, Equiano apologizes for Igbo custom by arguing for its similarity to the origins of Christianity rather than positioning an Igbo worldview in valid contention with Judaism or Protestant Christianity. Virtually all of the eighteenth-century black writers of the Anglo-Atlantic world wrote to “redeem” Africa by placing it within Biblical and classical contexts. At the same time these writers argued on behalf of enslaved Africans by declaring human bondage immoral.

The collective memories that came to underlie the emergence of African American public culture represented various attempts to deal with Africa as a place that was both proximate and remote and that increasingly became the object of various colonialisms.2 Moreover, the transatlantic slave trade itself became a kind of singular and compacted historical phenomenon.

By the late eighteenth-century, black and white abolitionists, including Wheatley and Equiano, compressed three centuries of transatlantic slavery into a singular event and institution. In result, it is possible to examine the emergence of African American public culture less as an outcome and more as a problem of collective imaginings of the past. That black people titled their first institutions as African Lodges, churches, or benevolent societies demonstrated their task of both reclaiming and re-imaging Africa. In a foundational way, the problem of memory animated the creation of African American institutions. Although Africa became a referent for black culture in the United States, this idea of Africa was already defined by notions of culture that dismissed, overlooked, forgot, or already reimagined native African ideas.

This imagining of Africa was created by a specific group of former slaves that did not include Wheatley’s parents or Muslim and animist slaves who resisted Christian conversion. This point requires emphasis because it reveals the complexity of collective memory and the problematic emergence of black public culture in the northern United States. The descriptor “African” fell out of general institutional use by the 1830s in favor of the idea that black people should call themselves “colored” or “of color.”3 Yet African American interest in Africa as a place that would reveal antiracist and abolitionist views of history continued to be shaped by underlying Christian perspectives. 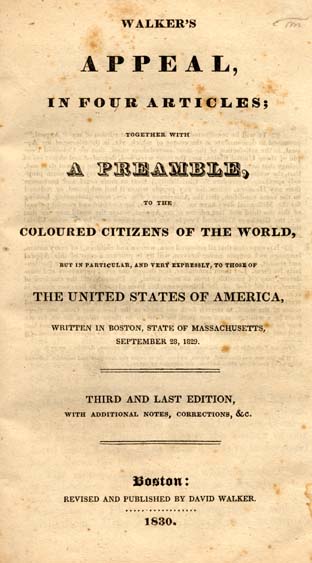 In his famous Appeal, David Walker called out not to Africans but to the “Coloured Citizens of the World, but in Particular, and Very Expressly, to Those of the United States of America.” Not only did Walker make militant abolitionist arguments, he did so using the idioms and ideas of nationalism and Christianity. Despite his radicalism, he too imagined an Africa that was in need of Christianity’s influence.

This brief historical overview highlights the dialectical nature of black identity and community formation at the turn of the nineteenth century. Even as African Americans remembered Africa, they also forgot and reconfigured its native traditions. Even as African Americans embraced American nationalism, the emerging United States did not accept them as freed people. In result, black identity has arisen from multiple, competing, continuous, and even discontinuous pasts and memories.

Rather than an end or outcome in a process of gradual assimilation or cultural loss, black identities are constantly emerging as responses to issues of racial apartheid and communal affirmation. Whether giving coherence to questions of black identity at the end of the eighteenth century or choosing the President in the twenty-first century, the political and cultural identities of black people have never been reducible to a discrete and unified list of interests and ideas. By themselves, voting patterns of today only tell us so much about memory, experience, and choice in the past.