loading...
By Ibram X. Kendi August 8, 2016 Comments Off on Beyond the Rope: A New Book on The Impact of Lynching on Black Culture and Memory

This post is part of a new and recurring blog series I am editing–announcing the publication of selected new books in African American and African Diaspora History. Several weeks ago, Cambridge University Press published a new book entitled Beyond the Rope: The Impact of Lynching on Black Culture and Memory. 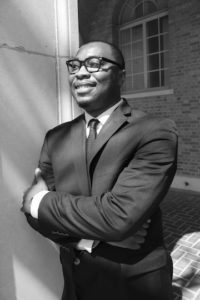 The author of Beyond the Rope is Karlos K. Hill. Professor Hill is an associate Professor of African and African American Studies at the University of Oklahoma and Founding Director of the Distinguished African American History Month Lecture Series at the university. Professor Hill specializes in the history of lynching and the antilynching movement in America. His core research aim is to uncover the various ways in which racial violence has been central to the black experience in America. Additionally, Professor Hill’s research explores how black Americans have resisted racial violence and how black resistance has changed over time. Professor Hill is a frequent commentator on issues of race, equity, and social justice. He has been quoted in the USA Today, Newswise, the Dallas Morning News, Texas Public Radio, and numerous other local and regional news outlets. His weekly podcast, “Tapestry: A Conversation About Race and Culture,” has a global following. Follow Professor Hill on Twitter @thinking4achang. 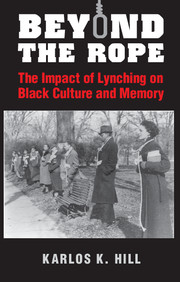 In Beyond the Rope: The Impact of Lynching on Black Culture and Memory, Karlos K. Hill powerfully contributes to the movement among historians to reconstruct counter narratives of lynchings told from the perspective of [a] variety of African American actors pursuing very different goals. Perhaps better than has been done before, Hill has historicized African American counter narratives of lynching, situating them within their sociohistorical context and drawing out their specific political objects.” —Sundiata Keita Cha-Jua, University of Illinois, Urbana-Champaign

Ibram Kendi: What type of impact do you hope Beyond the Rope has on the literature on lynching? Where do you think the field is headed and why?

Karlos K. Hill: Beyond the Rope argues that the lynched black body should be considered a floating signifier due to how African Americans’ attitudes and representational strategies concerning lynching changed over time. This argument is important because scholars as well as contemporary observers all too often perceive lynching as simply “white-on-black lynching” and the lynched black body as a timeless representation of black death and white terror. My hope for the book is that it will spark discussions about societal attitudes toward lynching and push historians to probe more deeply into the variety of narratives and multiple relationships African Americans have had with lynching and the lynched black body over the long twentieth century.