loading...
By Regina Mills February 19, 2019 Comments Off on Arturo Schomburg in Mind, Body, and Spirit

Arturo Alfonso Schomburg, known to many by his anglicized name Arthur A. Schomburg, is no stranger to most African American and diaspora studies scholars. The impressive collection that he donated to the New York Public Library has formed the foundation of much of the scholarship in the field. However, until very recently, scholarly research on Schomburg himself has been sparse. For this reason, I welcome Vanessa K. Valdés’s study of this foundational figure. Valdes’s Diasporic Blackness: The Life and Times of Arturo Alfonso Schomburg (2017) is the premier work for any scholar seeking more information on Schomburg’s multiple roles as an independentista, collector, and writer.

The book is framed as a biography, promising to educate the reader on Schomburg’s life and the contemporary events that shaped his intellectual journey. Valdés offers a comprehensive view by framing the work around the five facets of Schomburg’s identity and influence. In the first chapter, she contextualizes the Antillean independence movement, focusing especially on the Puerto Rican and Cuban figures that make up Schomburg’s “intellectual genealogy” (27). Across the remaining chapters, she presents Schomburg as institution builder, writer/historian, archivist, and portrait subject. Valdés’s project is strongly archival, pulling not only from the Schomburg Center for Research in Black Culture (SCRBC) but from scrapbooks, letters, and photographs held by Fisk, Columbia, Yale, and Hunter College (el Centro).

The introduction lays out Valdés’s primary concern: how Schomburg illuminates “definitions of blackness, masculinity, citizenship, and nation” and how his engagement “with these multiple discourses throughout his life, and his interpretation of said notions offers an assessment of Afro-Latinx subjectivity in the late nineteenth and early twentieth centuries in the United States and its commonwealth, Puerto Rico” (3). Like many Afro-Latinx Studies scholars, she often describes Schomburg using “bridge” language, viewing him as “a link” and “a conduit” (5) in the circles in which he traveled, continuing a common trope of the Afro-Latinx figure as a bridge between Black and Latinx communities. However, her analysis often goes beyond this figuration, particularly due to her thorough analysis of Schomburg’s representation and performance of Afro-Puerto Rican masculinity. Schomburg is never just a symbol; he is a fully embodied subject. 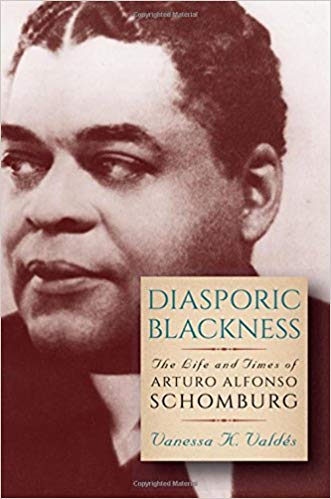 This first chapter is largely one of historical context and biography, focused on those who came before Schomburg rather than Schomburg himself. This chapter dispels the common charge in Schomburg’s time, and even in our own, that he abandoned his Puerto Rican roots and assimilated into the US Black community. Valdés’s attention to the impact of Haitian independence on the Hispanic Caribbean is particularly welcome, as it situates the influence of Black liberation and anti-blackness in the social and political history of Puerto Rico and Cuba. For example, in her reading of Salvador Brau’s tribute to Rafael Cordero, who started the first school open to students of all colors and backgrounds in Puerto Rico, she details how Brau represents Cordero in opposition to Haitian blackness, invoking a politics of respectability (48). By convincing the reader of Brau’s influence on Schomburg, we see how Brau’s own problematic ideas about race influenced Schomburg’s collecting and writing. In addition to Brau, she argues that five other Puerto Rican and Cuban intellectuals shaped Schomburg’s Afro-Latinx subjectivity: from Ramón Emeterio Betances he learned of Afro-Puerto Rican resistance, from Eugenio María de Hostos educational philosophy, and from Lola Rodríguez de Tío, Rafael Serra y Montalvo and José Martí he came to value pan-Caribbean activism.

The second and fourth chapters focus primarily on his institution building through organizations and the archive. They, however, are the weakest of the chapters, as they often read more as literature reviews rather than her own findings. Chapter Two’s focus on the organizations in which Schomburg held important leadership positions—the Prince Hall Masons and two Black historical associations—adds little new information to those topics. Chapter Four focuses on Schomburg as an archivist and his views on archival access and dissemination of knowledge. Valdés sets Schomburg up as a different kind of historian from Salvador Brau. She sees Brau’s motivation as “firmly establishing Puerto Rico as an inheritor of Spanish cultural values” and Schomburg’s as outside of the nationalist framework, focused instead on “collective histories of peoples of African descent” (96). However, this argument could be further developed by accessing a broader source base. For example, I was very interested in her section on his impact on the development of Fisk’s Negro Collection, since that topic has received less attention than the SCRBC, but she provides only two pages on this section. Overall, there is more focus on the theory of archive-building and other scholars’ views on archives than on Schomburg’s own philosophy of the archive, something that might have been thoroughly developed through analysis of his letters or other sources.

In Chapter Three, Valdés focuses on Schomburg’s published essays, which “broaden the parameters of his audience’s conceptions of blackness so as to include the Spanish-speaking populations of African descent” (72). She makes the case that “Schomburg’s historical articles,” though written primarily in English, should be viewed as crónicas, a Latin American genre of vignettes often written for periodicals, following closely Susana Rotker’s definition in La invención de la crónica (1992). Valdés makes a good case, since the genre is known for its skepticism of ‘objectivity,’ a perfect format in which to question the so-called logic of white supremacy. Valdés’s invocation of the crónica in many ways parallels Claudia Milian’s use of that genre, in her 2013 study Latining America, as a lens through which to consider Langston Hughes’s and James Weldon Johnson’s writing in and on Latin America. Valdés’s chapter does not provide a thorough literary analysis, per se, of his works, which is unfortunate since at the beginning of the chapter Valdés emphasizes Rotker’s argument that the crónica is a genre at “the juncture between the literary and the journalistic” (73). However, Valdés succeeds in introducing the reader to “representative pieces that reveal not only [Schomburg’s] dedication and commitment to the acknowledgment of Afro-Latinx contributions to the hemisphere but that also highlight the complexities of Afro-Latinx subjectivity” (72). In particular, she provides detailed and helpful historical context for the reader, so they can better appreciate, for example, Schomburg’s 1912 article in Crisis entitled “General Evaristo Estenoz,” written in the middle of what would be known as the Race War of 1912 in Cuba.

Valdés’s strongest intervention is her analysis of photographs and portraits of Schomburg. Largely ignored in previous works, Valdés’s close reading of a commonly circulated photo immediately grabs the reader’s attention. This examination of his engagement, and especially his resistance, to photography is powerful because it focuses on Schomburg’s agency over his body. Valdés’s emphasis on Schomburg’s embodied existence is apparent throughout the book and provides readers an image of the man as more than just a disembodied mind, an image that may have contributed to the erasure of his complex identity. In Chapter Two, she even imagines Schomburg’s sonic impact, asking how his voice, which may have “carried an accent conveying a youth spent in the Caribbean, one that was accustomed to speaking Spanish fluently” could have impacted the diverse audiences in which he held space (56). By examining the photographic representation of Schomburg as an Afro-Puerto Rican man, taking up space across a variety of communities, most of which were uncomfortable with his ambiguity, Valdés gives us a new way to see Schomburg. While much of his writing fits a particular kind of respectability politics, focusing on Black excellence rather than the ordinary humanity of blackness, Valdés’s analysis of Schomburg’s embodied choices depicts his defiance and Antillean revolutionary spirit.

At a relatively slim 138 pages (with 26 pages of endnotes), this book provides an excellent introduction to students and scholars seeking an accessible portrait of Arturo Schomburg. Not only does Valdés craft a compelling biography, she fully contextualizes his life and the transnational circumstances that most impacted his intellectual development. Most previous works view Schomburg through a US-centric lens, placing him as a Harlem Renaissance figure who forsook Puerto Rico. Diasporic Blackness, however, restores Schomburg’s Puerto Rican upbringing and his connection to African diasporic communities in the Caribbean and US. For those seeking an extended depiction of Schomburg’s diasporic identity, Valdés’s study can be placed alongside Flor Piñiero de Rivera’s 1992 collection of his writings and Elinor Des Verney Sinnette’s 1990 biography.

Though the above critiques suggest that Schomburg’s life and work demand further explorations, Valdés’s book is a necessary addition to the previous literature. It will be, without a doubt, the book recommended to curious community members who see Schomburg’s portrait on the wall of the SCRBC, or a graduate student who wants to know more about this iconic figure. Future researchers can build on the work of Diasporic Blackness by discussing the literary value of Schomburg’s writing, providing a fuller account of his impact on the archives at Fisk University, and examining Schomburg as a theorist of the archive.

Regina Mills is an Assistant Professor of Latinx and US Multi-ethnic Literature in the Department of English at Texas A&M University. She specializes in Latinx Literature, African Diaspora Literature, immigrant fiction, and life writing studies. She completed her PhD in English at The University of Texas at Austin in May 2018. Her current book project is entitled, Life Writing Across the Ethno-Racial Divide: A Literary History of Afrolatinidades. She has published in Chiricú Journal: Latina/o Literatures, Arts, and Culture.