Bowdoin College recently declared that it will no longer offer the Jefferson Davis Award to a student excelling in constitutional law or government.  The Award was endowed by the United Daughters of the Confederacy in 1972.  The College has announced that it is returning the funds to the UDC, and obviating the award.  My thoughts on this, which ran in the October 23 edition of the Bowdoin Orient, follow.

We are no longer to confer the Jefferson Davis Prize Award at Bowdoin College. I leave it to others to explain the history of the prize and the College’s course of action. I am more interested in understanding the rationale for suspending it.

Bowdoin undertakes this at a time when public discussion in America is leading to an unprecedented reconsideration of the place of Confederate symbols in national life. The “stars and bars” no longer flies on the grounds of South Carolina’s state house, while New Orleans officials are in the process of removing a public monument to Robert E. Lee. Yale University may rename a residential college named after southern nationalist John C. Calhoun. And in a move similar to our own, students at the University of Texas-Austin are petitioning to remove from campus a statue of Jefferson Davis, the President of the Confederate States of America.

These measures have been inspired by popular responses to the Charleston church shooting of June 2015, which was itself a response to national controversy over allegations of over-policing of people of color throughout the country. In short, heightened racial tensions are transforming the way we remember the Civil War era.

Despite widespread condemnation of the Charleston shooter, many take exception to those desiring the removal of public Confederate symbols. One South Carolina lawmaker objected that “they would take my heritage and make it into a Holocaust era-type description. . . . The Southern heritage, the Confederate heritage is very honorable.” Another called the flag removal “cultural genocide” and labeled threatened boycotts of the state “economic terrorism.” Far more troubling statements can be found on social media and online comments sections.

How should we understand what is happening?

In his poem “An Arundel Tomb,” Philip Larkin reflects on the effects of the years on two stone statues on a medieval grave.

Now, helpless in the hollow of
An unarmorial age, a trough
Of smoke in slow suspended skeins
Above their scrap of history,
Only an attitude remains:
Time has transfigured them into
Untruth.

Larkin’s meditation confronts us with the fascinating paradox of history: the past keeps changing. Time transfigures the scraps of history we retain. The ages turn, and with them the contexts that give the past meaning. Ultimately, if nothing else does, the mere passage of time renders untrue that which we seek to preserve.

The changing memory of the past has always been a potent reflection of Americans’ shifting values. Since the Founding, our national story has never been unitary or static. It has always moved to reflect new commitments, and acknowledge (at last) old realities. This can make us uncomfortable, particularly when it challenges what we think we know, or what we want to think, about our past. But as we change, our history changes.

So, too, the history of the Confederacy. For many years, historical memory of the Civil War was dedicated first to fostering peace by reconciling the sections and burying their differences. The Civil War became a “lost cause” for the Confederacy — a noble brother’s war fought to champion states’ rights, to defend southern soil or honor, or perhaps for no reason at all. This was a view reinforced in the classroom and represented in popular culture.

That slowly changed, especially among academics and historians. But because we Americans are a diverse lot who invest so much of ourselves in our past, it should not be surprising that we do not all agree. For many Americans, Confederate symbols remain potent sources of pride and touchstones to a noble heritage.

In the eternal contest over the memory of the Civil War, Jefferson Davis has always served as a polarizing figure. Before the Civil War, he vigorously practiced and defended slavery. As the owner of prime cotton-growing land and over seventy human beings, he had a large personal stake in the “peculiar institution.” His plantation at Davis Bend, Mississippi served as a model designed to further the fiction that slavery could be a benevolent institution. 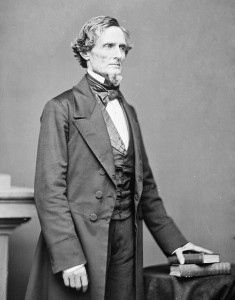 Jefferson Davis viewed his slaveholding as a political statement, commensurate with the positions he maintained throughout his public life. In 1848, as the nation wrestled with the fate of slavery in new western territories gained in a war with Mexico, he stood in Congress to excuse his fellow legislators for seeking to spread the institution to these new lands: “If slavery be a sin, it is not yours,” he reassured them. “It does not rest on your action for its origin, on your consent for its existence. It is a common law right to property in the service of man; its origin was Divine decree—the curse upon the graceless son of Noah.” Davis argued, like many other apologists for slavery, that blacks were of an inferior order and ordained by God to serve whites.

In 1854, as Franklin Pierce’s Presidential administration sought to annex Cuba for slaveholders, Davis (then Secretary of War) boldly declared that “African slavery, as it exists in the United States, is a moral, a social, and a political blessing.” Such views place Davis squarely in the camp of the most conservative southerners of his day, men such as John C. Calhoun and J.D.B. DeBow.

When southern leaders decided to secede from the Union following Abraham Lincoln’s election in 1860, they expressed similar commitments. Mississippi disunionists declared forthrightly, “our position is thoroughly identified with the institution of slavery,” while Texas seceded to protect the “beneficent and patriarchal system of African slavery” against those “proclaiming the debasing doctrine of equality of all men.” The Confederate Constitution itself differed from the United States Constitution largely in its overt protections of slavery. Davis’s Vice President, Alexander Stephens, removed any questions about the matter, declaring of the Confederacy that “its foundations are laid, its cornerstone rests, upon the great truth that the negro is not equal to the white man; that slavery, subordination to the superior race, is his natural and normal condition.”

Jefferson Davis, fully identified with such ideals, became President of the Confederate States of America. From that station, he prosecuted a war that cost the lives of 750,000 Americans — 2.4% of the entire population. These deaths constitute an astounding 17 percent of the 4.3 million white American males aged 20-40 in 1860 — a figure supplemented by the 40,000 African American deaths caused by the war. (In contrast, World War II cost the lives of 400,000 Americans, or less than a third of one percent of the national population.)

Jefferson Davis dedicated the Confederate cause to the defense of slavery. In 1862, when the Confederate Congress began conscripting soldiers, he personally exempted large slaveholders. When Abraham Lincoln used the Emancipation Proclamation to put slaves in arms, Davis accused the President of inciting “servile war”; he instructed his troops to treat captured black soldiers as rebellious slaves, and summarily execute the white officers who led them. Even as Confederate armies were falling to Grant and Sherman in the Spring of 1865, Davis did not choose peace. Instead, he called for “a new phase of the struggle,” a non-stop guerrilla action that would prolong the conflict and further inflict the horrors of war on civilian non-combatants.

Of course, none of this endeared Davis to the northern public. During the war itself, Davis was a pariah throughout the Union. Yankee troops marched to battle singing “we’ll hang Jeff Davis from a sour apple tree” to the tune of “The Battle Hymn of the Republic.” And when in the waning days of the conflict Davis fled the Confederate capital of Richmond, the northern press ridiculed him for allegedly disguising himself in women’s clothing.

Yet after the war Davis fared remarkably well for the leader of a failed independence movement. True, the Union Army occupied Davis Bend during the Civil War, transforming it into an experiment in free wage labor for emancipated slaves. And in an equally ironic piece of poetic justice, during Reconstruction Davis’s Mississippi Senate seat came to be occupied by Hiram Revels, an African American minister and civil rights advocate.

But Davis was never tried for treason. Instead, he was permitted to live peacefully and write his own history of the war — a version staunchly dedicated to justifying the Confederate cause. In this he was not alone, for many other Confederate leaders helped shaped the early memory of the war. It is sometimes said that the “winners” write history. Perhaps, but apart from the Civil War it is difficult to think of another modern instance in which the vanquished came to exercise such enormous control over a national narrative.

That is in fact precisely why Davis has been publicly honored. Throughout the country, statutes have been erected to his honor, roads and schools named after him, and public holidays created to celebrate his birth. At a small college in Maine, a prize was endowed for him.

That was Jefferson Davis. In the words of W.E.B. DuBois, he was “the champion of a people fighting to be free in order that another people should not be free.”

The past keeps changing. Thank goodness it does.

Comments on “Another symbol of the Confederacy falls”