loading...
By Robyn Autry May 10, 2017 Comments Off on Another Look Into Dana Schutz’s “Open Casket”

Recently, I visited the Whitney Museum’s Biennial at its new location in the Meatpacking District of Manhattan. I was there primarily to see Dana Schutz’s work Open Casket (2016), a semi-abstract painting inspired by photographs of 14 year-old Emmett Till’s body after being brutally murdered by two white men in 1955. In the painting, Till’s lifeless body is presented in a black jacket adorned with a red flower over a crisp white shirt. The sharpness of his attire is offset by the swirling heavy strokes of brown, white, and red bleeding into each other used for his disfigured face. The mutilated state of his face is slightly abstracted, enough so that most onlookers can take in the sight without averting their gaze too much, but also enough that it echoes more recent news and social media images of the bleeding black bodies.

It is this gaze – the power involved in what is seen and by whom – that has troubled many, especially black artists and protestors, sparking calls for the painting to be removed and even destroyed on the grounds that it is racist and contributes to a toxic culture whereby black suffering and death are treated lightly, and even as entertainment. At the opening of the biennial on March 17th, artist Parker Bright protested Open Casket by standing before it, blocking it from others’ sight, wearing a t-shirt that read “Black Death Spectacle.” He and others contend that the painting, and the Whitney’s decision to feature it, treats racial violence as a decontextualized object. The display of such violent images, particularly those of the recent past, in history museums tends to make audiences less uneasy than when shown in art museums and galleries where the financial gain is more visible. Schutz’s assurance that the piece will not be sold belies the gain she will likely incur from having her work shown at the Whitney, especially to such dramatic effect.

I approached the work with these thoughts in mind. Before I could fully absorb the spectacular sight, of the onlookers as much as the painting, an excited reporter rushed over to me and asked what my “conclusion” was. I replied, “About what?” She asked whether I thought it was alright for a white artist to make this painting and whether it was “successful.” What success meant in this context is unclear, I responded, and artists can do whatever they please. The bigger question is whose art is more or less likely to make onto the walls of the Whitney in the first place. I also told her that regardless of the artist’s intention, or even those of the museum, we should take people’s concerns seriously, and then I reminded her that I had only just arrived and wanted some time with the piece (alone). 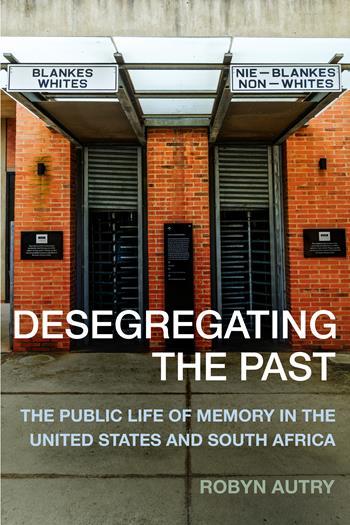 In Desegregating the Past: The Public Life of Memory in the US and South Africa, I write about ‘memory deviants,’ those individuals who break social norms about how, when, and under what circumstances the past, particularly violent pasts, should be represented, and by and for whom. They refuse to remember responsibly. That is, they refuse to abide by unspoken rules about which events from the past matter, what they mean today, and who gets to tell which stories. Memory deviants toy with deeply held public sentiments about the stuff of history, effectively calling history and memory itself into question by recasting tragedy, and often blurring the lines between victims and perpetrators, between pain and pleasure.

I consider a range of representations that proved as divisive as the histories themselves, including Kara Walker’s A Subtlety, or the Marvelous Sugar Baby (2014) at the Domino Sugar Refinery in Brooklyn and Fred Wilson’s Mining the Museum (1992) at the Maryland Historical Society. As diverse as they are in their content, style, and media, these artists all break with visual and narrative conventions, often overturning taboos and exposing silences. Our memories help define who we are, and those that are collectively shared become the basis of group identity and solidarity, so that tarnishing and rejecting them, or simply remembering differently, is often treated as profane, threatening, or insensitive. Still, memory deviants insist upon their visions, however uncomfortable they might make the rest of us, and their power to dislodge fixed ideas about society.

In the interests of generating an empathetic connection to her subject, Dana Schutz’s seeks to partially de-racialize a history, not to mention a specific event, which is so thoroughly racialized that is difficult for most of us to imagine other narratives. In doing so, she has been accused of being oblivious to her own whiteness, and the role of a white woman in the circumstances that hastened Till’s gruesome death. Many have commented that she cannot speak on behalf of Till’s mother, black motherhood, or black life (and death) more generally. We might also consider how she was cast into such a role in the first place and what expectations we have of art to represent us, let alone document our lives (and deaths).

Is Schutz a memory deviant then? She said publicly that she knew the work would be controversial, but felt compelled to see it through as a statement about familial love and loss. Inspired by the wave of police killings of unarmed black men, she sought to imagine the intimacies of such public deaths for mothers. This rationalization – turning to a black child’s lynching as an expression of universal grief – feeds into ongoing debates about the appropriation of black experiences.

Schutz’s work has certainly generated heated debate about the politics and aesthetics of racial violence, and troubled ahistorical public discourses about police brutality and racism more broadly. Is it her own whiteness that prevents us from seeing her work as a timely artistic expression of grief, mourning, and shame? Is it because this volatile historical material has been creatively rendered in a painting shown at an elite art museum, rather than documented more blandly at a history museum?

Much of Schutz’s audacity rests in her whiteness, but memory deviance is not about identity politics alone. It is about breaking conventional wisdom, turning existing thought on its head at whatever costs. Supporters praise her work for wedging open a space for debate however contentious and insist on her freedom of speech, denouncing calls for the work to be removed and destroyed as acts of censorship. They see her work as forcing viewers to confront the persistent realities of racial violence and the brutal aftermath of racism, topics that are generally sidelined or even denied. This line of reasoning betrays an unacknowledged orientation toward white audiences because people of color are well aware that white supremacy is very much alive.

Her insistence on the universality of suffering – that she may not know the looming threat under which others live, but she can relate to any mother’s loss – is not deviant however sincere. In fact, it is a core facet of liberal whiteness, this fascination and professed empathy with black suffering and brutalization. In the brief statement accompanying the artwork, the Whitney acknowledges the media storm, or spectacle, surrounding the painting and Schutz reveals that she “did not know if [she] could make this painting ethically or emotionally.” But she did make it and the Whitney then hung it, and now it is up to us to ponder what both decisions mean for us alone and together.

It is this spectacle that brought me to the Whitney. As I stood before the Open Casket, struggling not to avert my gaze, I attempted to quiet the noise. The painting is uncanny. I could see more detail in the blurred mass of Till’s face – brown skin, black hair, white teeth, and blood red streaks – than in his far less abstracted clothing, the black suit with a red lapel flower and a crisp white buttoned shirt stained with blood. I was reminded of the ‘opportunity’ to watch people bleeding out and beheaded online, the latest twist in a long history of viewing images of atrocity. While I did not see the painter’s motherly love, others may see it. While I did not see black death, I did see white fantasies of black bodies, dignified in their pain and suffering.

The spectacle, then, was not of black death, but of white rage and guilt. Missing from Schutz’s scene are the white faces and bodies involved in the brutalization and then the mourning of others. What would a heightened focus on their bodies as broken and twisted in anger, fear, denial, and shame resemble? What would it mean for white patrons strolling through the museum to open the casket and gaze upon themselves? In the end, museums are a lot like caskets that have been left open. We peek inside and sometimes the sight undoes us, or makes us weak in the knees, or bores us to tears. But it is only in looking that we will ever know.

Robyn Autry is an Associate Professor of Sociology at Wesleyan University with broad interests in racial identity, collective memory, and visual culture. She is the author of Desegregating the Past: The Public Life of Memory in the United States and South Africa (Columbia University Press, 2017).