loading...
By Ibram X. Kendi August 26, 2016 Comments Off on Agents of Change: A New Documentary on Black Student Activism

This post is part of a new and recurring blog series I am curating–announcing the release of selected new works in African American and African Diaspora History. Agents of Change premiered on February 11 in Los Angeles, as the centerpiece feature at the 23rd Annual Pan African Film Festival where it won the Jury and the Audience Award for Best Feature Documentary.

Agents of Change was produced and directed by Frank Dawson and Abby Ginzberg, who were both student activists at Cornell University in the late 1960s. 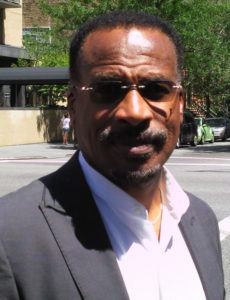 Dawson is now an Associate Dean, and former Chair of the Communication and Media Studies Department, at Santa Monica College. Dawson is also a producer, writer, and founding partner in NuHouse Media Group, a company originally formed to develop and produce television series, movies for television, and cable television features in association with CBS Entertainment Productions. Dawson has previously worked for six years at the CBS Television Network, and served as Director of Comedy Development and Director of Programming at Universal Television. He was Universal’s production executive on the NBC dramatic series, “Miami Vice,” and as a partner in the media company, “2002 Communications,” Dawson helped produce Tavis Smiley’s first television talk show series Pilot. Dawson earned his M.S. from the Newhouse School at Syracuse University, where he has been inducted into the school’s professional gallery of distinguished alumni.

Ginzberg has been producing award-winning documentaries about race and social justice for the past 30 years. Her feature award-winning documentary, Soft Vengeance: Albie Sachs and the New South Africa (2014) won a Peabody award, and many other awards, and has screened at film festivals around the world.  Her work as a documentary filmmaker took her to the Academy Awards in 2012 with a short documentary film, The Barber of Birmingham: Foot Soldier of the Civil Rights Movement, for which she was the Consulting Producer. The Barber premiered at Sundance in 2011 and won numerous awards for Best Short Documentary at film festivals across the US. Abby’s documentaries, Soul of Justice: Thelton Henderson’s American Journey and Cruz Reynoso: Sowing the Seeds of Justice (about an African American and Latino judge) have aired on public television and been screened at film festivals across the United States and abroad and won numerous awards. She is the President of the Berkeley Film Foundation, and sits on the Boards of the Thelton Henderson Center for Social Justice at UC Berkeley Law School, The Impact Fund and the Yale Law School Visual Advocacy Project. 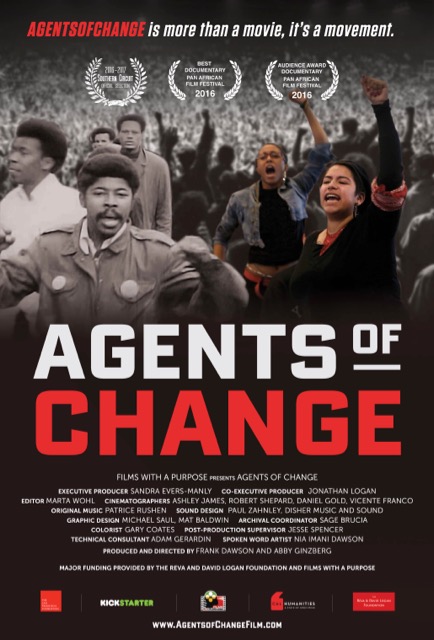 From the well-publicized events at San Francisco State in 1968 to the image of black students with guns emerging from the takeover of the student union at Cornell University in April, 1969, the struggle for a more relevant and meaningful education, including demands for black and ethnic studies programs, became a clarion call across the country in the late 1960’s. Through the stories of these young men and women who were at the forefront of these efforts, Agents of Change examines the untold story of the racial conditions on college campuses and in the country that led to these protests. The film’s characters were caught at the crossroads of the civil rights, black power, and anti-Vietnam war movements at a pivotal time in America’s history. Today, over 45 years later, many of the same demands are surfacing in campus protests across the country, revealing how much work remains to be done. Agents of Change links the past to the present and the present to the past–making it not just a movie but a movement.

Ibram Kendi: Agents of Change is finally out before audiences, interacting with the world! What are you most proud of about your documentary?

Abby Ginzberg: It took us about 7 years to make Agents of Change and while we were working on it, we were always looking for ways to make it connect to today’s college students. Then in the last 18 months there were demonstrations at many colleges and communities echoing the themes of Black Lives Matter and pushing for recognition of the specific challenges faced by Black students and other students of color at colleges across the country.  The demands of the current protests loudly echoed many of the themes and stories recounted in our film.  This revealed that so many of the issues that students were fighting for in the late 1960s are still relevant today and moreover that many of the same struggles remain. As we have begun the outreach with the film, we have shared many post-film discussions with current students who speak about the specific challenges they face in terms of racism on their campuses or the efforts to preserve and expand, rather than cutback, their Ethnic Studies departments and programs. Specifically, at San Francisco State University, which is featured in our film, current students successfully fought back recently against cuts to the College of Ethnic Studies, revealing the deep ties today’s students have to this flagship program. Creating this inter-generational dialogue was one of our goals and seeing it happen has been very rewarding.

In addition, we were always interested in sharing the experiences of the activists featured in our film who have devoted their entire lives to working for social change and it is inspiring to hear them share the arc of their journey with new audiences.  At a recent screening in Oakland, Danny Glover, one of the people featured in our film, had just returned from a trip to Sao Paulo in Brazil. He was able to share stories of the efforts of those in Brazil trying to transform the lives of those living in favelas.  Ramona Tascoe, a doctor who was one of the activists from SF State, has been an emergency first responder in Haiti, the Philippines and the US Embassy bombing in Kenya, putting her medical skills to use around the world. Jimmy Garrett, one of the founders of the Black Student Union at San Francisco State, has been working on building a hospital in Vietnam to help people suffering from the long-term effects of Agent Orange.