loading...
By Jaime Alves November 5, 2016 Comments Off on Afro-Politics and Civil Society in Brazil: An Interview with Kwame Dixon

In today’s guest post, Professor Jaime Alves, ‎Assistant Professor of Anthropology at CUNY Staten Island, interviews Professor Kwame Dixon about his latest book, Afro-Politics and Civil Society in Salvador da Bahia, Brazil. Dr. Dixon is an assistant professor of African American Studies and Political Science at Syracuse University. His primary research is focused on Brazil and Latin America. His new book, Afro Politics and Civil Society in Salvador da Bahia, examines the transition to democracy and the struggle for racial justice and human rights in Brazil and Salvador da Bahia. He writes on human rights, Afro Civil Society, racialization (racial discrimination), and Black Politics and social movements in the Americas. His last book, Comparative Perspectives on Afro-Latin America, was published by the University Press of Florida in 2012.

Jaime Alves: Salvador da Bahia has been the focus of African diaspora intellectual inquiry for quite some time. One cannot help but think of E. Franklin Frazier’s pioneering research, for instance, on the question of black cultural survival in the city. Very few scholars, however, have explored the question of black electoral politics. How did you come to be interested in Salvador as a ‘site’ for your research and black electoral politics as your research interest?

Kwame Dixon: This is an excellent question, as it opens up ways to understand the significance and relevance of my new book. On one hand, Salvador da Bahia has been the focus of inquiry for E. Franklin Frazier and other scholars (mainly anthropologists), while at the same time, there are so few books focused on Black Politics in Brazil and Salvador (not to mention Afro-Latin America). First, I am a political scientist and along with examining Afro-Civil Society, Afro-referenced identities, and Black social movements, I wanted to analyze the rise of Black Politics and the historical construction of political power in Salvador, one of the oldest cities in the Americas. Second, as your readers might know, traditional political science like comparative politics and international relations, which are my subfields, simply have not taken issues of Black Politics seriously. Third, back in the spring of 2013, while I was in Salvador doing field research, Spike Lee was visiting. During an interview on the evening news, he shouted out a question to the mayor, whose name is ACM Neto. The question was “Hey Neto, why does Salvador not have a black mayor?” The premise of Lee’s question being that if Salvador is a majority black city (more than 80%), then why does it not have or why has it never elected a black mayor? 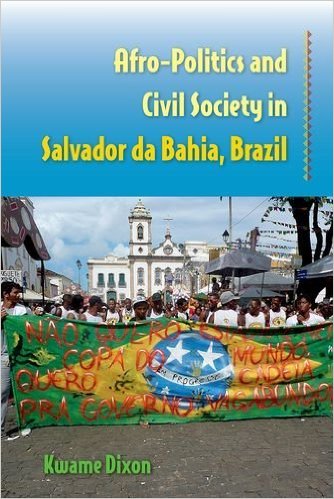 After doing some background research I found that Salvador had never elected a black mayor (not to be confused with never having had a black mayor), and more surprising is that until the middle of the 1990s its city council was nearly all white. While these questions are central to understanding Salvador and Brazil, I had to be careful, as I did not want to write a book explaining why Salvador never had a black mayor, because there is so much more to the story. I therefore wanted to examine the historical construction of political power, the rise of Black Politics and black social movements, and of course, to theorize the concept of Afro-Civil Society. In doing so, I believe I was able to provide a deeper texture to the reading of Salvador and Brazil.

Alves: One of your arguments in the book is that black activists find it difficult to mobilize in Salvador because of the denial of racism in mainstream society. In what ways might black cultural practices be a vehicle of political contestation despite its commodification?

Dixon: Again, this question goes to the heart of my research. Black cultural practices still represent forms of contestation on some level. As the book amply illustrates, starting in the 1970s and 1980s, we witness the rise of afro blocos (carnival groups) who began as grassroots cultural groups that were able to re-inscribe a more positive black identity and speak to the masses of Salvador. In the middle of the 1970s, Brazilians lived under a military dictatorship, and thus open dissent and contestations were not allowed. However, as early as the 1960s, the state began to “valorize” Afro-Brazilian cultural traditions and practices, thus making them more acceptable to the broader population. So, while many blocos began as agents of social change and to some extent articulated an oppositional politics, they were slowly co-opted by the state by the late 1990s and early 2000s.

At the same time we witnessed the rise of more specific political groups like Movimento Negro Unificado (MNU) and the Steve Biko Cooperative. The blocos worked from a cultural angle and groups like the MNU and the Steve Biko Institute worked from a political angle. Along these lines the blocos were able to reach the black masses, which was without precedent and became not only extremely popular but profit-making enterprises. In doing so, some argue the blocos commodified black culture, a process Patricia Pinho refers to as “Milking Mother Africa.” Now, committed black activists must fight the commodification of black culture by blocos and the state. However, in Salvador MNU and Steve Biko have remained autonomous social agents and have not bought into the commodification process.

Alves: You make an important claim that Salvador’s black politics is part of an African Diaspora’s civil society in the making. This argument is especially important for the scholarship on African Diaspora because it recognizes the agency of black people. How do you see your work contributing to the African Diaspora as a field of knowledge and as a political community?

Dixon: Correct, I use and coined the concept Afro-Civil Society, as I have never seen it used before in the literature or by activists in the Americas. Afro-Civil Society forms the conceptual underpinning of my research. I have conducted research in Bluefield (Nicaragua), Esmeraldas (Ecuador), Choco and Cali (Colombia) and most recently in Salvador da Bahia, Brazil. These are all majority or near-majority black regions that have been marginalized over the centuries without any significant support from the state. Moreover, I grew up in the Deep South in the late 1960s and early 1970s as the remnants of Apartheid were crumbling and  while reconstituting itself at the same time.  I add this to underscore that I have seen large swaths of the black world in the Americas. Therefore, when I approach the study of the African Diaspora one of my questions is: how do Afro-communities in this hemisphere, despite their racialization and marginalization, continue to not only survive but, on some level, to thrive?

I offer the concept of Afro-Civil Society as a novel way to think about black social, cultural, and political agency. The argument with respect to Salvador is that Afro-Civil Society is engaged in several important political projects: first, challenging hierarchies of political exclusion; second, constructing new forms of citizenship by claiming new rights; third, testing recently enacted antidiscrimination and affirmative action measures; fourth, struggling to reclaim land rights, both rural and urban; and fifth, seeking to increase political participation and representation on the local, state, and federal levels.

Alves: One of the most compelling chapters of your book is chapter 7 on black electoral politics. Can you tell readers a bit more about this chapter? How did your interviewee/s explain their participation in the state apparatus in a city in which the state is deeply implicated in black suffering? Is there space for the black vote in Brazil’s ‘racial democracy’?

Dixon: Chapter 7 is not only the most compelling but it was also the most difficult to research, frame, and write because, as I stated earlier, there is so little research on Black Politics in Latin America and Afro-Brazil in particular, so I had to address issues of black political power or the lack thereof. Moreover, as a political scientist from an HBC with specific training on Black Politics I believe I was methodologically compelled to address these questions. I knew that for the Afro-North American audience the notion of a black majority city like Salvador not having a black mayor could be a hook. But, as I stated, I wanted a more structural analysis.

First, my participants for this chapter were so surprised that I was focusing on Black electoral politics in Salvador. I mean, who sits around in Salvador on a Friday night researching the mayor’s office, his cabinet, and the city council? However, in order to get a tight grip on local politics I had to do this type of work. I interviewed the Vice Mayor, who at the time was a black woman, a black city councilman who was part of the first wave in the 1990s, the first black mayor who served but was not elected, and two current councilmen and women as well as members of the mayor’s cabinet.1

Additionally, I interviewed local experts on Salvador politics. To answer your question, as part of Salvador’s elected political class, none of them felt implicated in the suffering of blacks. Why? First, many had just come to power; second, we have to examine the historical construction of political power in Salvador to better understand black exclusion and marginalization. Remember, blacks in Salvador entered the game towards the middle of the 1990s, so they are relatively new.

Alves: What do you hope scholars of Brazil—as well as those working outside of your field—take away from your book?

Dixon: First, despite its central role in the development of the Americas, so few people outside of Brazil have heard of Salvador. Second, rich, vibrant cultural formations and positive Afro-referenced social movements, on one hand, have not lead to economic, political, and economic opportunities for blacks in Salvador even though they are the demographic majority. Third, we need more works (both theoretical and practical) that pays greater attention to gender relations regarding the role of black women and the structural forces that marginalize them. Fourth, local political power in Salvador is still in the hands of a largely white ruling oligarchy and with the recent constitutional coup Brazil has an almost all-white ruling government.

Jaime Alves is an Assistant Professor of Anthropology at the College of Staten Island (CUNY) and an associate researcher at Centro de Estudios Afrodiasporicos (Universidad Icesi), in Colombia. He holds a PhD in Anthropology and Black Studies from The University of Texas, at Austin. He is currently completing a book entitled, The AntiBlack City: The Politics of Race, Gender and Violence in Urban Brazil.