This month I interviewed Sherwin K. Bryant about his work on the Black Pacific and Afro-Andes. Bryant is Associate Professor of African American Studies and History at Northwestern University and serves as the Director of the Center for African American History. As an historian of colonial Afro-Latin America and the Atlantic/Pacific Worlds, Bryant works at the intersections of cultural, legal, social history and political economy, with an emphasis upon Black life in the Kingdoms of New Granada and Quito (what is now modern Colombia and Ecuador). Dr. Bryant’s book, Rivers of Gold, Lives of Bondage: Governing through Slavery in Colonial Quito offers the first serious treatment in English of slavery and slave life in colonial Quito and challenges the narrower conceptualization of slavery as primarily an economic demand. He is currently working on two new book-length projects. The first charts the history of Black subjectivities along Colombia and Ecuador’s Pacific littoral while the second develops a history of slave life within the contraband slave routes that ran through Panama and New Granada before the era of free trade. Follow him on Twitter @sherwinkbryant.

Yesenia Barragan: As you explain in Rivers of Gold, the Kingdom of Quito had a relatively small enslaved population in comparison to the more familiar cases in the Atlantic world and has thus been overlooked in the historiography of slavery in the Americas. What insights can we gain by examining the history of colonial Afro-Quito?

Sherwin K. Bryant: Until the last two decades, the African diaspora to Spanish America received scant attention compared to the US, Brazil, and the British and French Caribbean. This was due in part to a scholarly reading of slavery through labor, the plantation complex, and an emphasis on numbers. These approaches caused previous scholars to underestimate the socio-political impact of slavery and Black life throughout much of Latin America.

Another enduring challenge to the study of Blackness in Latin America is found in the national myths and master narratives that diminish the importance of Black life, and those that deny and devalue the scale of Black populations and the extent of their on-going persecution. Rather than account for the full scope of Black life, these nations have preferred narratives of mestizaje, or race mixture, marginalizing Blacks and their contributions to the nation. To some degree and for some time now, scholars colluded in this elision, privileging studies of slavery as an institution, or race mixture and social climbing. Consequently, the writing of Spanish America’s Black history was fraught, episodic, and belated relative to the flourishing studies on Indigenous populations and women since the advent of social history in the 1970s and 80s. Finally, a US-centric approach to African American history and the prominence of the Atlantic basin in diaspora studies contributed to these omissions. 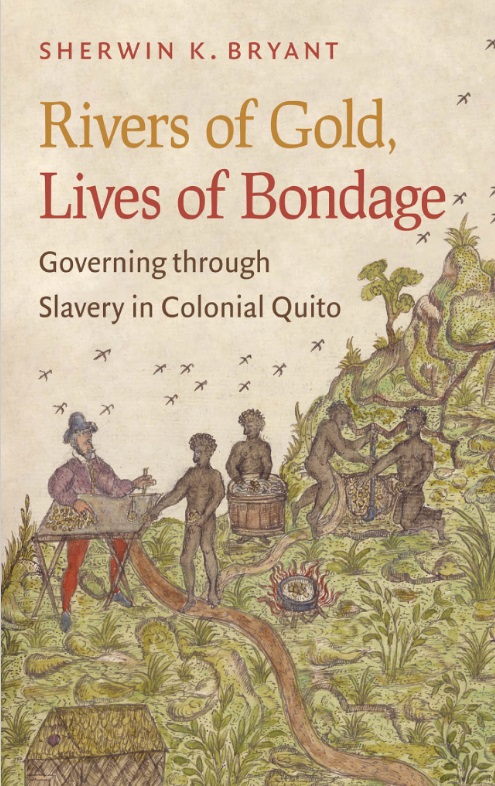 A focus on the Afro-Andes suggests that we reconsider what we know about colonial history in the region and the importance and presence of Africans and their descendants. In my book, Rivers of Gold, Lives of Bondage: Governing through Slavery in Colonial Quito, I insist that actually Quito was quite emblematic of slavery across mainland Spanish America, where enslaved Africans and their descendants were interstitial aspects of colonial life and society. It suggests the need to study Black life outside of both major urban centers like Lima or Mexico City, beyond large-scale slaveholding to see how the enslaved and slavery still proved ubiquitous, productive of standing and honor, and elemental to all economies due to its malleability. But this is not merely the story of Quito. Rather, it is the story of slavery as a corollary to conquest and a governing practice that helped to build the scaffolding and architecture of colonial bureaucracies, even when there were few slaves present in a given society. Ultimately, Afro-Quito invites us into life along another passage within the African Diaspora, reminding us of the importance of time, place, and scale in our methods and theorizations.

Barragan: You’re currently working on two new book-length projects on slavery and the development of an early modern “Black Pacific.” Can you tell us more about these projects? How do you place these projects in conversations with the more established field of Black Atlantic studies?

Bryant: Yes. The first promises a history of the Afro-Pacific. Stretching from the Isthmus of Panama southward along the coast of Colombia through Esmeraldas is the Gran Chocó, or the Pacific lowlands of New Granada and Quito. As Spaniards endeavored to subdue indigenous populations and territories well into the seventeenth century, they imported an increasing number of enslaved Africans. Establishing runaway settlements and free towns through absconding, Africans constituted and conditioned Spanish imperial claims over this region. Without them, vast expanses of the Pacific lowlands would never have been claimed, colonized, or settled. Territories of Imperial Blackness: Sex, Crime, and Law in the 18th-century Pacific, offers a history of colonial Black life in the areas of Barbacoas and Guayaquil. Using slave marriage annulments, criminal court cases charging slaves with rape, murder, and witchcraft alongside civil court cases, I analyze daily life and the ways that Africans and their descendants crafted lives in the Pacific lowlands. Organizing that work around the themes of sex, crime and law, I situate the study of Black life in this dense, bio-diverse rain forest landscape. Along the way, I make a series of commentaries on Spanish colonial jurisprudence; the penetration of law into remote, rural and tenuously settled territories; and the legal practices of the enslaved while using law and legal culture to interrogate everyday life.

The second project, Contraband: Black Life inside Spain’s Circuits of Racial Commerce, moves beyond the Pacific and the Andes to examine contraband slave trading circuits throughout the Spanish empire. Spanish mercantilist policy required that enslaved Africans arrive via licensed vessels, endure bodily inspections, royal branding, and baptism, and that their captors pay import taxes and sales taxes. I analyze court cases brought against smugglers to reconstruct an experiential history of slave life within these seemingly clandestine, illicit circuits.

Regarding Atlantic versus Pacific History: I think the binary is a false one. Scholars of Pacific and Andean worlds have been at pains to make clear the ways that the Pacific was, if anything, constitutive of the very Atlantic world that somehow became delimited within the Atlantic basin. Indeed, scholars are thinking increasingly in transoceanic frames, eschewing such binaries. Yet, the very landscape and demography of the Pacific lowlands suggests it as fertile ground upon which to test and expand our knowledge about the African diaspora. The waterways, biodiversity, and large scale African presence, from Panama right on down to Santiago, invites comparisons and a deeper dialogue with work on Atlantic Africa, Brazil and the Caribbean. The work of scholars such as Natasha Lightfoot and Aisha Finch on mobility, insurgency, and the complexities of freedom in the Caribbean demand engagement from work in similar fluvial environments along the Pacific/Andean territories. Finally, as we expand our findings on the Black Pacific and the Andes, we promise to fill lacunae in the fields of Andean Studies, Black Studies, Latin American Studies, and Latin American History.

Barragan: The past few years has witnessed increasing institutional interest in the histories and studies of Afro-Latin America. In 2013, the first Afro-Latin American Research Institute at Harvard University was created. At Northwestern, you direct the Center for African American History and co-direct the Andean Cultures and Histories Working Group. What changes have you noticed in the field over the past decade?

Bryant: First, I would point to the growth of PhD programs in African American Studies over the last fifteen years. During that time, PhD-granting departments such as Northwestern, Princeton, Harvard, Brown, UT Austin, UCLA and UC Berkley have also hired faculty working on Afro-Latin America. Second, prizes, awards, and sections of professional associations devoted to Afro-Latin America such as those formed over the past few years by LASA and ASA also suggest the importance of this area of inquiry. Third, I have witnessed and benefited from the emergence of student-led working groups and programming such as the Afro-Latin@ Working group begun here at NU by Paul Lopez Orzo and Jared Rodríguez. Finally, political and intellectual developments in countries such as Brazil, Colombia, and Ecuador have resulted in more studies on Black life, expanding numbers of Black students attending universities in Latin America and the US, and still others writing dissertations and theses on these themes.

Barragan: In your work, you argue that “transoceanic sites within the Pacific Andean territories” have been “undertheorized” in the study of slavery and the African diaspora. What analytical and theoretical insights can such sites offer for scholars of slavery and Black Studies? What new directions might it chart?

Bryant: New work on slavery, Blackness, and race in the Pacific Andean territories has turned our attention to the bound lives of Andeans and Africans, the importance of enslaved subjects as status symbols who also manipulated the region’s material culture when expressing themselves through dress and self-presentation, the fractional freedoms they won as litigants, and the ways slavery was both interstitial to colonial life and governance. This suggests the need to expand the temporal and geopolitical framing of Blackness. If natal alienation marked Black life, how did that vary across time and space? How did African descended peoples condition racial abjection, or sometimes forge racial life through their very colonial condition? Enslaved and free Blacks who lived within Pacific realms of commerce, transit, piracy and privateering invite Black Studies scholars to reconsider the granular specificities that crisscross the Atlantic and the Pacific oceans. Likewise, maroon communities, Black governors, and Free Towns that dotted the Pacific lowlands invite further historical inquiry and should challenge Black Studies to continue to configure itself globally.   In short, the particular histories of racial, gender and sexual subjection that marked the predicament of Blackness in the Pacific Andes must surely nuance current theorizations of race, social death, Black politics and racial life in circulation within Black Studies. I am sure that there are many other possible analytical and theoretical insights. Yet, in order to fully understand these analytical possibilities, Black Studies and Black History must incorporate Afro-Latin America more fully into its intellectual and analytical designs. Indeed, current theorizations of Blackness, slavery, social death, and race remain bereft without a deeper concern for the granular specificity of history across time and space. Theorizations of Blackness and slavery based upon abstractions of slavery, or grounded in the nineteenth century US south will simply no longer do. It reminds us of the need to work at the intersections of theory and history across time and space.

Comments on “Afro-Latin America and the Black Pacific: An Interview with Sherwin K. Bryant”