This post is part of my blog series that announces the publication of selected new books in African American History and African Diaspora Studies. Today is the official release date for A Mind to Stay: White Plantation, Black Homeland, published by Harvard University Press.

The author of A Mind to Stay is Sydney Nathans. He is Professor Emeritus of History at Duke University where he taught for forty years. Professor Nathans is a recipient of fellowships from the Rockefeller and Guggenheim Foundations. He is also the author of To Free a Family: The Journey of Mary Walker (Harvard University Press, 2012).

To Free a Family tells the remarkable story of Mary Walker, who in August 1848 fled her owner for refuge in the North and spent the next seventeen years trying to recover her family. To Free a Family received the 2013 Darlene Clark Hine Prize of the Organization of American Historians as the best book in African American Women’s History and the 2013 Frederick Douglass Book Prize of the Gilder-Lehrman Center for the best book on slavery, resistance, and abolition. He lives in Denver, Colorado. 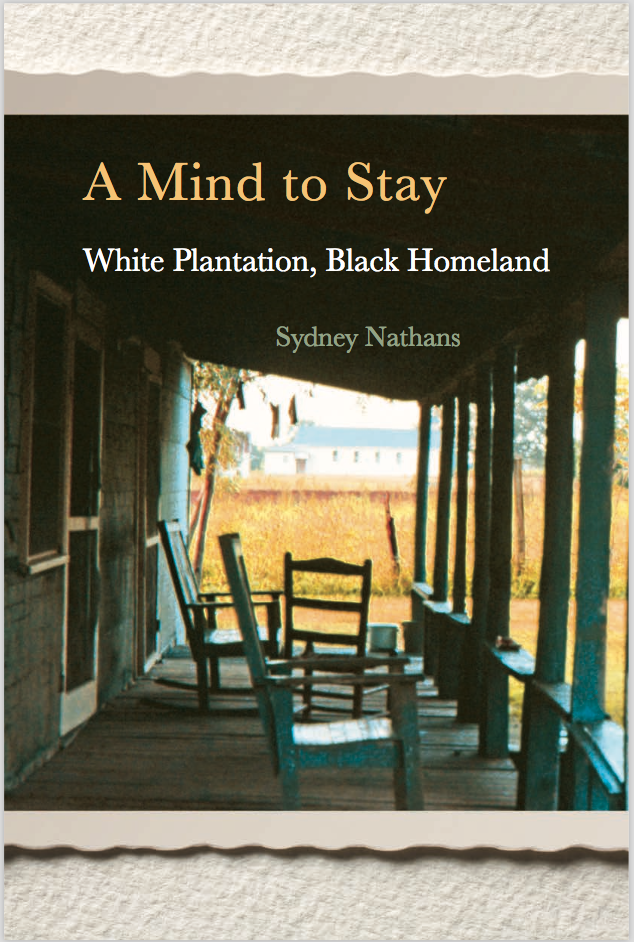 The exodus of millions of African Americans from the rural South is a central theme of black life and liberation in the twentieth century. A Mind to Stay offers a counterpoint to the narrative of the Great Migration. The book tells the rare story of people who moved from being enslaved to becoming owners of the very land they had worked in bondage, and whose descendants have held on to it from emancipation through the Civil Rights era. Through the prism of a single plantation and the destiny of black families that dwelt on it for over a century and a half, the book illuminates the changing meaning of land and landowning to successive generations of rural African-Americans. Those who remained fought to make their lives fully free—not just for themselves but also for those who left but might someday return.

The book recounts how, for each generation, the land served as a platform for aspirations. The story starts with the ambitions of a North Carolina planter, Paul Cameron, who in 1844 purchased a 1600 acre plantation in western Alabama and sent out 114 enslaved workers to cultivate cotton and enlarge his fortune. He sought to transfer people and (as he saw it) a “humane” model of bondage from east to west, but subsequently witnessed the model fail, and all authority and “gratitude” dissolve, before his eyes. In 1870 he sold the Alabama land to black buyers, emancipated people whose tenacity enabled them to acquire the land and to bequeath it to the next generation. In the twentieth century, the homeland became a sanctuary against neo-plantation rule, a shield against the humiliations of Jim Crow, and in 1965, a staging ground for involvement in the Civil Rights struggle.

Anchored by an archive of thousands of letters from the planter and by years of interviews with descendants of those who bought his plantation, the book covers a wide swath of African American history and embraces a vivid cast of characters, while it keeps central the one black family whose members span the full saga, from 1814 to 2014. As Isabel Wilkerson, in The Warmth of Other Suns, artfully humanized the Great Migration, A Mind to Stay seeks to humanize all that it took for African-Americans to get land, and to tell how and why those who stayed held on to the homeland “against all comers.”

Sydney Nathans turns the story of the Great Migration on its head in this extraordinary and wide-ranging history of the lives, labors, and land of black men and women who remained in the South. Deeply researched and written with passion, it is a brilliant and original accounting of how ‘landedness’ was achieved over two centuries of African American struggle.” —Ira Berlin, author of The Long Emancipation: The Demise of Slavery in the United States

Ibram X. Kendi: What are the principal findings of A Mind to Stay? What do you hope readers take away from reading it?

Sydney Nathans:  One doesn’t usually think of emancipated African Americans as either wishing or able to acquire the plantation they were enslaved on, or focus on blacks who remained on the land while millions joined the twentieth century exodus from the South. Beginning in bondage, A Mind to Stay centers on African Americans who were part of a single plantation and the ways in which successive generations navigated slavery, freedom, and land-holding over the course of two centuries. It highlights the commitment to family—to preserving family during bondage and to protecting family in freedom—that lay behind the drive to acquire the plantation in the 1870s and to keep it as a homeland to the present day.

The story begins with two people—a North Carolina planter, Paul Cameron, who bought a cotton plantation in the western Alabama “Black Belt” and an enslaved worker, Paul Hargis, who was sent west to work it. The planter hoped to transfer the unspoken pact of his family’s plantation in the east—a trade-off of forced labor for family cohesion—to his absentee-owned place in the west. Paul Hargis navigated that pact, dodged its gradual collapse, and after emancipation, committed himself to holding his family together by first working, and when the opportunity came, buying part of the plantation they’d farmed in bondage.

Family remained central to holding on to the land in the twentieth century. The narrative shifts to two descendants of black purchasers of the 1870s, descendants who became models and champions of keeping the land for “all the heirs.” Landless people had to deal with bossmen, with the annual ritual of “you almost made it,” and with the requirement “to bend” to survive. Starting in the 1930s, evictions began, as cattle replaced cotton and later, machines replaced laborers. In contrast, “heir land” kept family members from becoming tramps in the Depression era, and was kept to serve as a buffer and safe haven for those who migrated away in the second half of the twentieth century. A Mind to Stay shows that when it became clear that those who’d left would never come back to a South where they weren’t citizens, the landholders joined the demonstrations of 1965 to win voter rights, and continued to struggle long after to make the land fully free.

Comments on “A Mind to Stay: A New Book on Black Landowners”