Earlier this week, we learned of the passing of Professor Cedric Robinson, a beloved scholar and mentor who authored several foundational texts including Black Marxism: The Making of the Black Radical Tradition and Terms of Order: Political Science and the Myth of Leadership and Black Movements in America. Dr. Robinson was Professor Emeritus in the Department of Black Studies and the Department of Political Science at the University of California, Santa Barbara. He received his BA from the University of California, Berkeley and his MA and Ph.D. from Stanford University. He served as Chair of the Department of Black Studies as well as of Political Science and has also served as the Director of the Center for Black Studies at UCSB. His fields of teaching and research included modern political thought, radical social theory in the African Diaspora, comparative politics, and media and politics. Dr. Robinson authored numerous articles on US, African and Caribbean political thought; Western social theory, film and the press.

*Over the next several days, we will feature guest posts from Robinson’s students, friends, and colleagues, reflecting on his life and legacy. We begin with a post by David J. Leonard, professor in the Department of Critical Culture, Gender, and Race Studies at Washington State University, Pullman.

The professor, scholar, and person I am today was shaped by my 2 years spent among some of the kindest, most generous, and most brilliant people.

Cedric Robinson was my mentor. To this day, I continue to be his student.

I remember my first day on campus at orientation. On that day, he encouraged me, made me feel comfortable, and challenged me to use my time at Santa Barbara to learn, grow, think, and utilize my knowledge in transformative ways. That would continue throughout my years at UCSB and beyond.

I took several classes with Cedric Robinson. He was a brilliant political theorist, the author of Black Marxism–a book that importantly opened up new space in the race-class debates of the 1980s and 1990s–among many other books. His classes were challenging, thoughtful, and insightful.

I still remember how he was able to connect the dots; I remember how he used stories to illustrate larger themes and issues. In his courses on Black film, I remember his lectures on Cabin in the Sky, In the Heat of the Night, and Super Fly. As a teacher, he not only challenged his students to reflect on representations, on production and consumption, on image making and resistance, but also provided us with tools where our movie watching would be forever changed. His work in the classroom, and his research, from Black Marxism to Black Movements in America, challenged us to rethink what we knew and reimagine the purpose of learning.

I remember his beautiful smile, his laugh, and how he passionately paced around the room. He cultivated my love in reading, learning, and writing. He mentored me as I wrote my undergraduate thesis on the Black college athlete. The breadth and depth of his knowledge was amazing.

But more than anything, his actions inside and outside the classroom told me that my learning and my future mattered. He showed me unconditional love and respect. He cared for his students; he encouraged them, and created a community at UCSB for me. Along with Douglas Daniels, Kofi Hadjor, Otis Madison, Gerard Pidgin, Claudine Michel, and his partner, Elizabeth Robinson, he set me on a path that I currently walk today. He did this not only through the educational lessons, but also by introducing me to so many authors, histories, and so much more. He challenged me, encouraged me, and told me over and over again that I had a place in this world of academia–within the department and within the field of Black Studies.

His encouragement and love meant the world to me. His being proud, and saying it, was/is priceless. When I would hear over the years that he had nice things to say about me, or when I would run into him at a conference and he would embrace me and say, “keep up the good work,” it meant the world to me – it was everything. I always hope to do good work–work that pays tribute to all he taught me. I always hope that he would know the influence he had on me.

Cedric Robinson will be missed. In the classroom, through his research, and through everyday interactions, he gave many, myself included, so much. He supported, mentored, and loved us in so many ways. His legacy is in his brilliant scholarship, in his students, in the community that he created in Santa Barbara and beyond, and in the revolutionary love that he cultivated in all who were touched by this brilliant and loving scholar. 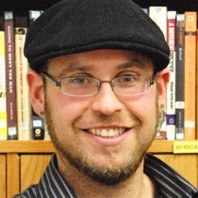 David J. Leonard is professor in the Department of Critical Culture, Gender, and Race Studies at Washington State University, Pullman. He received his B.A. in Black Studies from the University of California, Santa Barbara, and a Master’s and Ph.D. from the University of California, Berkeley. David J. Leonard is a professor at Washington State University, Pullman. He is the author of After Artest: The NBA and the Assault on Blackness (SUNY Press, 2012) and the forthcoming Playing While White: Privilege & Power on/off the Field (University of Washington Press). You can find his work at his website. Follow him on Twitter @drdavidjleonard.