One afternoon while sitting in the Schomburg Center reading the Membership Book of the Commandment Keepers Ethiopian Hebrew Congregation in Harlem, I stopped on a page that listed children consecrated in 1926 by the congregation’s leader, Wentworth Arthur Matthew. I noticed the entry for Judy May Saddler, almost two years old, and her brother, 5-month-old Sandy Benjamin Saddler, both of whom Matthew consecrated at a ceremony in November of that year. As I looked at the names of their parents, Miriam and Alexander, I realized that I recognized this family of immigrants from Nevis who had moved to Harlem. It was not from the Commandment Keepers, however, but from a decade later in the context of Father Divine’s Peace Mission movement, which both Miriam and Alexander joined sometime in the early to mid-1930s.

The Saddlers’ presence in the Commandment Keepers’ records stood out to me because it provided evidence of a connection between two of the groups I was researching. Miriam was also memorable because I had seen her photograph attached to paperwork she filed in 1932 declaring her intention to petition for naturalized citizenship. Even more memorable was the fact that, when she filed the petition itself in 1936, Saddler requested to be naturalized under the spiritual name she had taken as a member of Father Divine’s Peace Mission movement: Virgin Mary. Saddler’s citizenship petition was rejected even though she had apparently met all the requirements. No reason was listed on the paperwork, but given the challenges other Peace Mission members experienced in having their spiritual names recognized, objection to her choice of name is likely. Alexander was successful in gaining citizenship a few years later, even though he invoked his spiritual name, the more innocuous Moses Defendant, on his naturalization paperwork. Virgin Mary and Moses Defendant, who lived apart from one another and their children during their years in the Peace Mission in accord with Father Divine’s requirement to reject “mortal ties” in favor of a spiritual life of devotion to him, eventually left the Peace Mission, as they had the Commandment Keepers, and resumed use of their birth names.

I never discovered whether the Saddlers moved to another religious community after leaving the Peace Mission and reuniting their family. But questions about Miriam and people like her hovered over this project as I tried to give voice to what led her and her family to join and eventually to leave the Commandment Keepers and Father Divine’s Peace Mission. Given the meager textual record, recovering motivations often proved impossible, but the effort to render Miriam Saddler on the page highlighted a set of broader interests that motivated me in my work. I am excited that these challenging and generous responses to New World A-Coming touch on many similar questions that set the backdrop for the project and offer alternative readings of sources I examine in my efforts to address them, highlight interpretive gaps, and point us in new directions for future work.

Tisa Wenger reminds us of the significance of conceptions of nation alongside religion and race in a range of contexts, noting that the language of nation was prominent in the discourse of the founders and leaders of the religio-racial movements. Indeed, ideas about peoplehood, sometimes accompanied by a desire for territory and political sovereignty, animated all of their founders and leaders. In thinking through the meaning of nation in each of these groups, I did not assume that they would embrace a singular vision of nation or that the racial components of their nationalism would be uniform. In fact, I found variations inflected by their different religio-racial theologies. Because I was especially interested in understanding how members of the movements enacted the religio-racial theologies the founders and leaders offered, sometimes developing or transforming them in the process, I began with questions of self and moved outward to consider broader configurations of family, community, nation, and world. With this focus on lived theologies on the ground, conceptions of nation often became muted in my analysis in favor of attention to how members negotiated more local concerns. Wenger’s call to explore the power of ideas of nation and nationality here, however, highlights the influence of broader frameworks in shaping the experiences of these individuals. They may have been focused on enacting religio-racial identity in local transactions with government officials, but they were always subject to larger forces that defined them at times as “too political, racially defined, and therefore not authentically religious.” In underscoring nation in this discussion, Wenger also opens up the possibility for considering yet other “axes of difference” that may have shaped the conjunction of religion, race, and nation for the religio-racial movements and in American religious history more generally.

Emily Clark and Chernoh Sesay highlight gender as a significant aspect of the story of the religio-racial movements and press for deeper analysis than I offer. In doing so, they raise questions that illuminate issues in the study of early twentieth-century African American religious history beyond the cases of the religio-racial movements I examine. In organizing my study thematically and around the lived theology of the movements’ members, I tried to be attentive to the terms in which they discussed the process of religio-racial reformulation of the individual self and how that transformed a person’s relationship to family, community, and nation. Participants most often discussed religio-racial theologies of gender in relation to family and a collective future, rendering the groups’ approaches to gender similar to those in broader black communities and in American society despite their distinctive religio-racial frameworks.

Clark and Sesay each identify additional ways in which I might have explored the significance of gender in the movements, asking about the meaning of male leadership and the influence of masculinity on the religio-racial identities the groups promoted. As Clark suggests, recognizing the gendering of leadership allows us to see the groups as participating in mainstream American religious life even as they set themselves against it in a variety of ways. In looking for the stories of average members I found a strong presence of women in all of the groups, with many participating in institutional management and spiritual leadership. Given my focus on the first decades after the founding of the religio-racial movements, when theologies, practices, and institutional structures were still in formation, it might be useful to view women in these movements as contributing founders and, indeed, as leaders, even if they did not serve as the public face of a given group. 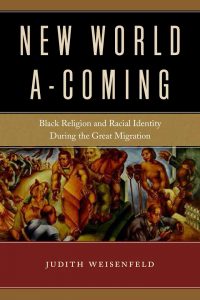 The question of the significance of masculinity for founders, primary leaders, and members is an important one, and Clark and Sesay offer rich avenues for consideration. Sesay asks about the “broader impacts for thinking about how gender, and masculinity in particular, became reformulated, and for thinking about how notions of respectability evolved from and informed these communities in the early twentieth century.” The suggestion that attending to constructions and performances of masculinity in the religio-racial movements might reveal different genealogies of respectability than those grounded in black Protestant convictions and that resonate far beyond the movements is an exciting one that I hope to see scholars pursue. Indeed, this would be another way to think about the complex positions the groups occupied that combined opposition to and participation in American society.

Danielle Brune Sigler issues an important call to scholars to “engage more proactively in conversations about how [government] records are preserved and made accessible,” given their “significant capacity to help recover the lives and experiences of people underrepresented in extant archival material.” I came to understand the richness of government records for this sort of work accidentally after happening on Rabbi Wentworth Matthew’s World War II draft registration card on Ancestry.com and seeing “Hebrew” written in the box marked “Negro.” The question Sigler raises of preservation and accessibility has gnawed at me since that time, partly because the digitized versions of so many of these government records are sequestered behind the paywalls of for-profit genealogy and history websites.

I discovered that access can be thwarted not only by a paywall, by decisions about which materials to digitize (American genealogy sites contain few records from Africa and the Caribbean), or by incorrect indexing, but also by the search architecture websites employ. After happening upon Matthew’s draft registration card with “Hebrew” inserted, I wondered if men in the other religio-racial movements made similar requests and were successful. I entered “Hebrew” in the box for race in Ancestry’s World War II draft card database and found more men of African descent who had asked for this racial designator. When I entered “Moorish” and “Moorish American” the database returned a list of men with names or other information indicating membership in the Moorish Science Temple.

Knowing that members of Father Divine’s Peace Mission rejected racial categorization, I conjectured that they might request that their race be listed as Human, and entered that into the search box. This search did, indeed, return a substantial list of men who persuaded the registrars to write “Human” on the form. The same search in the database today returns none of these records, and my correspondence with the company did not result in the restoration of the older search possibilities. The pressing issue of access, then, also includes the ways in which the new technologies we bring to bear on digitized materials shape what we are able to find in the databases. Thus, Sigler’s call to scholars to look beyond the materials themselves and raise questions about the presentation of materials in these databases is profoundly important.

I am deeply grateful to the editors of Black Perspectives and the Journal of Africana Religions for bringing together this group of scholars whose thoughtful and challenging responses have provided me the opportunity to reflect on what I was able to accomplish. They have identified significant and rich aspects of the topic that remain open for future work.

Judith Weisenfeld is the Agate Brown and George L. Collord Professor of Religion at Princeton University. She is the author of Hollywood Be Thy Name: African American Religion in American Film, 1929-1949 (University of California Press, 2007) and African American Women and Christian Activism: New York’s Black YWCA, 1905-1945 (Harvard University Press, 1997). Her most recent book, New World A-Coming: Black Religion and Racial Identity during the Great Migration (NYU Press, 2017) received the 2017 Albert J. Raboteau Book Prize for the Best Book in Africana Religions. Follow her on Twitter @JLWeisenfeld.

Comments on “Writing a New History of Black Religion: An Author’s Response”