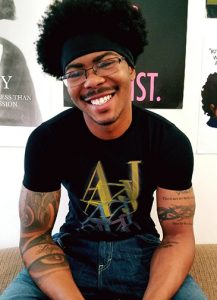 Marquis Bey is an Assistant Professor of African American Studies at Northwestern University and has a PhD in English from Cornell University. Bey’s work focuses on Blackness and fugitivity, transness, and Black feminism. He is particularly concerned with modes of subjectivity that index otherwise ways of being, utilizing Blackness and transness — as fugitive, extra-ontological postures — as names for such otherwise subjectivities. His first book, Them Goon Rules: Fugitive Essays on Radical Black Feminism (University of Arizona Press, 2019), is a collection of creative nonfiction essays weaving together the personal, the vernacular, and the scholarly. The various essays put forth a meditation on Blackness and Black feminism that departs from general identitarian understandings and moves toward conceptions of fugitive being. Fashioning fugitive Blackness and feminism around a line from Lil’ Wayne’s “A Milli,” Them Goon Rules is a work of “auto-theory” that insists on radical modes of thought and being as glimpsed through Blackness and non-normative genders. His second book, Anarcho-Blackness: Notes Toward a Black Anarchism, is a brief, pamphlet-like text theorizing what might be considered Black anarchism. He uses the prefixal “anarcho-” as the crux for articulating the spirit, as it were, of anarchism throughout aspects of the Black Radical Tradition. Follow him on Twitter @MarquisDBey.