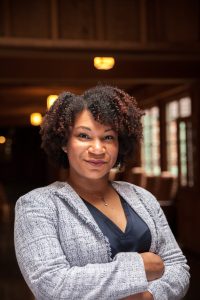 Alaina Morgan is a historian of race, religion, and politics in the African Diaspora.  She is a Postdoctoral Fellow in Islam in North America in the Department of Religious Studies and the Sohail and Sara Abbasi Program in Islamic Studies at Stanford University. She is currently editing her book manuscript, Atlantic Crescent: Black Muslim Internationalism, Anti-Colonialism, and Transnational Community Formation, which explores the ways that Islam and ideas of Blackness were used by Muslims in the United States, the United Kingdom, and the Anglophone Caribbean to form the basis of transnational anti-colonial and anti-imperial political networks.   She received her Ph.D from New York University’s Department of History in 2017 and a JD from Columbia University School of Law in 2006.