Annette Joseph-Gabriel: How did you come to these three women–Sarah Baartmann, Ourika, and Jeanne Duval, in your research on Blackness in the French imaginary?

Robin Mitchell: I actually began graduate school thinking I was going to be studying African American expatriate, Josephine Baker! I was fascinated by the marketing of her in France, and that she served as a “racial marker” for so many people who spoke of Black people in France. I read a terrible biography about her and in it, a French producer who was looking at her rehearsals said something to the effect that given French people’s fantasies about Black women, more nudity was required. That moment sealed my fate. I thought to myself, “what French fantasies?” So, I began moving backwards from Baker, looking earlier into the 20th and 19th centuries for other moments where a Black woman becomes part of the French landscape.

That eventually led me to Sarah Baartmann (also known as the Venus Hottentot). For me, she helped the obsession about Baker make sense. I started reading other 19th century historians and came upon Baartmann. Then, I did what most historians do: I looked through the archives looking for any Black woman I could find. And I found a lot of them! After that, I really couldn’t think about anyone else. She was the subject of my master’s thesis, and then my dissertation. That led me to Ourika–who was gifted as a house pet by the Governor of Senegal–and then to Jeanne Duval, the common-law wife of the white French writer Charles Baudelaire. The woman had been studied before, but not together in a way that would tell us something new about France.

Trying to find out details of the women’s actual lives was complicated. What I found in the archives were representations about them. So, I began there. I wanted to understand how they were being sometimes literally “fed” to white Frenchmen and women. It was only when I started working on my book, Vénus Noire: Black Women and Colonial Fantasies in Nineteenth-Century France that I saw how colonial fantasies and imaginations intertwined with a type of racial ventriloquism, and how useful white French people saw them when they talked about so many other things. So, while the women had been talked about before, there was a way to speak about them together that would tell us something new about France itself.

Joseph-Gabriel: What did you find most challenging and most rewarding in telling the stories of the three women in your book? 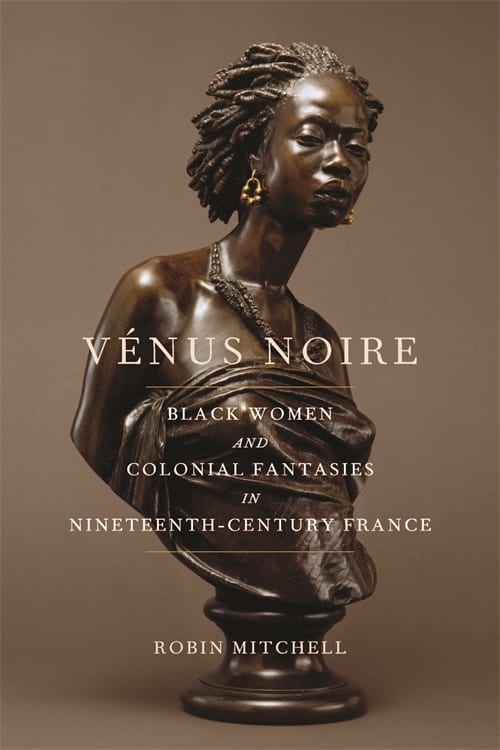 Mitchell: It was challenging to do research about “race” in a nation that won’t acknowledge that category. Therefore, I couldn’t just go to a search engine and begin to find my subjects that way. It took me a while to figure out how to locate them. But what was most challenging for me was that I wanted the archives to provide some information about them speaking their own narratives. And that didn’t happen. In that way, I felt like I had failed these women.

So, trying to present them as fully formed women was hard. I didn’t want to put words into their mouths. If I was speculating on something, I wanted to make that clear. I also didn’t want them to be “heroines” in the traditional sense, because, it felt false. I wanted to see where someone claimed they were angry, or when they refused to cooperate. It was only in reading the autopsy of Baartmann after she died that I saw, at one point, after days of humiliation and degradation, that she said “no.” And my heart sang. Because no matter what else, she had that moment when she looked at her captors and said, “no.” And I was really humbled and proud to write about it.

Finding Ourika’s signature was another moment. To hold the paper that she signed, stating she wanted to be emancipated from her caregivers–and also to know she could read and write. And with Duval, that she wasn’t always very nice. That she fought back. And that she outlived her common-law husband, which meant he didn’t have the last word about her life.

Joseph-Gabriel: What contribution do you hope that your book will make to Black intellectual history?

I’m a 19th century French cultural historian specializing in race and gender, who is also interested in the histories of Black women and their stories both in France and in the United States. Because of my focus, I also look at issues of sexuality and representation and popular culture like plays, spectacles, and fashion. I’m lucky in that I don’t need to only prove that something happened. I can also look at why someone wanted others to believe something could or did happen. This gives me more freedom than some other historians. It can also be more frustrating to locate sources. I was inspired by seeing Black women first in French paintings and sculptures and prints and then hearing that Black women didn’t exist on French soil in the early 19th century.

When I began researching, it was clear they existed in lots and lots of places: legal treatises, scientific works, and cultural representations. And that studying them together showed us a lot about how white Frenchmen and women dealt with their own anxieties of the loss of the Haitian Revolution, changing gender roles, and trauma about their own place in the world.

I hope my contribution to Black intellectual history is that my work opens up avenues that might seem less “rigorous” to more traditional scholars and take snapshot moments of Blackness and anti-Blackness to see how other people attempt to produce that for the larger world. In addition, I’m interested in how that new knowledge works alongside actual Black people in 19th-Century Europe attempting to carve out spaces for themselves. Our appearance in so-called white spaces destabilizes what we think we know about those spaces, and reinforces our connection to those spaces. Finding out about Blacks in early 19th France changed how I saw Blackness–and France itself. How France does (and does not) deal with race is longstanding and complicated. Understanding how historically race and race relations are confronted will hopefully help in contemporary race relations.

Annette Joseph-Gabriel is a scholar of contemporary Francophone Caribbean and African literature with interdisciplinary specializations in Black transnational feminisms and slavery in the Atlantic world. She is currently an Assistant Professor of French and Francophone Studies at the University of Michigan. Her book, Reimagining Liberation: How Black Women Transformed Citizenship in the French Empire, (University of Illinois Press, 2020) mines published writings and untapped archives to reveal the anticolonial activism of Black women in the French empire. Her articles have appeared in Small Axe, Eighteenth-Century Studies, Slavery & Abolition, Nouvelles Études Francophones, and The French Review. She is managing editor of Palimpsest: A Journal on Women, Gender, and the Black International. Follow her on Twitter @AnnetteJosephG.

Comments on “Black Women in Nineteenth-Century France: An Interview with Historian Robin Mitchell”

Leave a Reply to Glenn B. Wing Cancel reply