The past five years have brought numerous fifty-year Civil Rights and Black Power Movement commemorations to the fore. Last year, the Brooklyn Museum organized the exhibit Soul of a Nation: Art in the Age of Black Power to celebrate Black visual arts practice that took place from 1963 to 1983. While Soul of a Nation chronicled the work of artists throughout the United States, the exhibit was organized regionally, showcasing how artists and art collectives from different cities responded visually to the conditions Black people faced in their respective communities. Artists tussled over the question of what art should be, who it was for, and how it could speak to African Americans. The work of Chicago’s artists and the famous art activist group AfriCOBRA stood out for the rejection of abstraction in favor of creative and daring pieces of political art, and art that focused on positive representations of Blackness.

Art historian Rebecca Zorach’s timely monograph, Art for People’s Sake: Artists and Community in Black Chicago, 1965-1975 goes into greater depth about the motivations of Chicago’s Black artists during the Black Art and Black Power Movements. Infamously dubbed the “artistic wing” of the Black Power movement, the Black Arts Movement (BAM) began after Chicago’s Black artist group the Organization of Black American Culture (OBAC) created a mural called the Wall of Respect in the summer of 1967 in Bronzeville, a predominantly Black neighborhood on the South Side of Chicago. Zorach skillfully connects how residential segregation brought about by “urban renewal” spurred African Americans’ claims to public space through art. The wall featured Black heroes and heroines such as Malcolm X, Marcus Garvey, Ruby Dee, Ossie Davis, and Sonny Rollins, while also incorporating poetry with lines from Amiri Baraka’s “SOS—Calling All Black People.” The Wall of Respect was meant to engender a sense of pride within the community. The mural literally transformed the space into a site of performance with community events, rallies, concerts, and poetry readings taking place there. The positive impact that Black artists in Chicago had in the Black community through projects like OBAC’s Wall of Respect was not inevitable. Zorach thoroughly explains the importance artists placed on creating an idea of a homogenous, shared community through their work.

Zorach makes a rich contribution to the field of art history that has largely ignored the Black Arts Movement. Black artists’ engagement with African American communities during the Black Arts Movement has not been thoroughly studied because racial solidarity has been assumed. Zorach explains how art collectives such as OBAC and BAM luminaries such as Baraka and poet Larry Neale asserted that artists should adhere to a “Black aesthetic” which dictated that art be relevant and digestible to the Black community as a whole. This meant an emphasis of the shared experiences of all African Americans be present in Black works of art. Zorach explains that Black cultural nationalists, who believed that political revolution needed to first be stimulated by a rich Black cultural life, heavily influenced the BAM. However, the Black artists’ relationship with the community had to be dialectical. The community did not only solely serve as inspiration to the middle-class Black artists, the middle-class Black artists had their work critiqued and accepted by the community. Art for People’s Sake is a prime example of why visual artists’ contributions to the Black Arts Movement need to be studied more seriously. 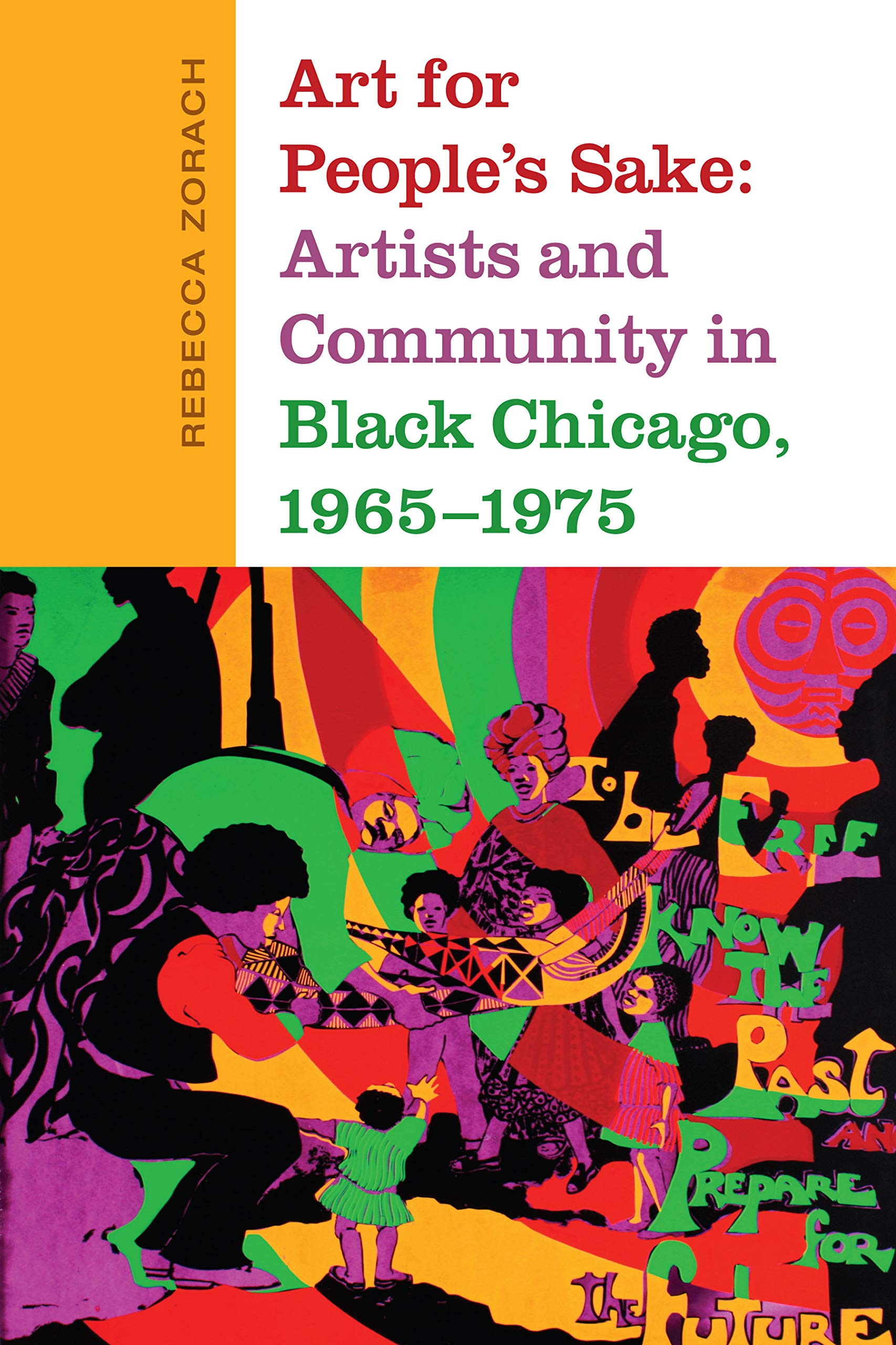 Zorach also boldly intervenes in the historiography of the Black Arts Movement by including visual artists. Until Daniel Widener’s Black Art’s West (2010) and Zorach’s Art for People’s Sake, the work of musical and literary artists such as Amiri Baraka (LeRoi Jones) dominated scholarly works of the BAM. Zorach explains that the study of visual arts is on the periphery because artists of all sorts during the Black Arts Movement stressed the rejection of European and Western perspectives in their work. Even if visual artists portrayed Black life, visual art itself was deemed Western because “an emphasis on vision characterized Western societies, while non-Western societies emphasized the aural” (17). In Art for People’s Sake, Zorach upends that view by arguing that the visual dimension of the Black Arts Movement did not merely present images for its Black viewers to simply look at; artists wanted their viewers to be transformed.

For example, in the section on “positive images,” Zorach details how positive images were used to take the energy of political art a step further by “presenting a new, ambitious program for the future …” (187). Unlike reactionary political art that responded to the condition of Black people, positive art was “actionary.” Positive images often demanded something of the view. Zorach uses artist Barbara Jones-Hogu’s Unite (1969-1971) as an example (194). Black people with Blackened pupils and resolute expressions raised their fists in the air while the background shouts, “UNITE.” Viewers immediately become a part of the collective. Positive art was art for the people.

The Wall of Respect and positive images were not the only visual art products that inspired Chicago’s Black community. Zorach chronicles the 1968 creation of Art & Soul, an art gallery established by the Conservative Vice Lords, a youth gang that went “conservative” in unlikely partnership with the Museum of Contemporary Art in Chicago. This gallery was set up in part to address the lack of leisure facilities in Black and Brown neighborhoods. The center offered art classes, exhibitions, and residencies for artists. The gallery offered yet another critique against the rejection of African Americans from institutions of work, education, leisure, and creativity. Art & Soul fostered a distinctive style of Black art and preserved the feeling of Black solidarity. The work by Chicago’s Black artists with the participation from the Black community highlights how the rhetoric of self-determination manifested itself on the ground, specifically through visual arts.

Art for People’s Sake is an important contribution to cultural history, art history, and the historiography of the Black Arts Movement. One of Zorach’s goals was to offer inspiration for contemporary artists on how they can “imagine new forms of political action and autonomy …” (29). The monograph could have been enhanced with an assertive conclusion that put forward the stakes for arts and artists today. When the current administration has continually threatened to slash funding for the National Endowment for the Arts and the National Endowment for the Humanities, resources that many artists of color and art organizations that service Black and Brown communities depend on, the artists’ presence in the community is even more necessary. This monograph also had the opportunity to directly connect the positive work of gangs like the Conservative Vice Lords to the possibilities for Chicago and their community organizers today. Despite this, her themes of community and collective action shine through. Art for People’s Sake should be required reading for artists, non-profit organizations, community organizers, and scholars interested in social movements, education, and art history.

Tracey Johnson is a history Ph.D. Candidate at Rutgers University, New Brunswick. She focuses on the visual dimension of the Black Arts Movement. Her dissertation “Carving Out A Space For Themselves: Black Artists in New York City, 1929-1989,”investigates how Black visual creators became arts educators through the founding of programs, such as prison arts programs, the establishment of community arts organizations, and the building of autonomous visual art institutions including the Studio Museum in Harlem. She places their efforts in conversation with the civil rights and Black power movements. Her research has been funded by the New York Public Library, Emory University's Rose Library, and Rutgers Center for Historical Analysis. Tracey graduated with a B.A. in history from The College of William & Mary in 2014.